The Grand Canyon in Arizona is among the world’s most amazing natural wonders. by By Jeremy Hobson/Here & Now TWEET SHARE 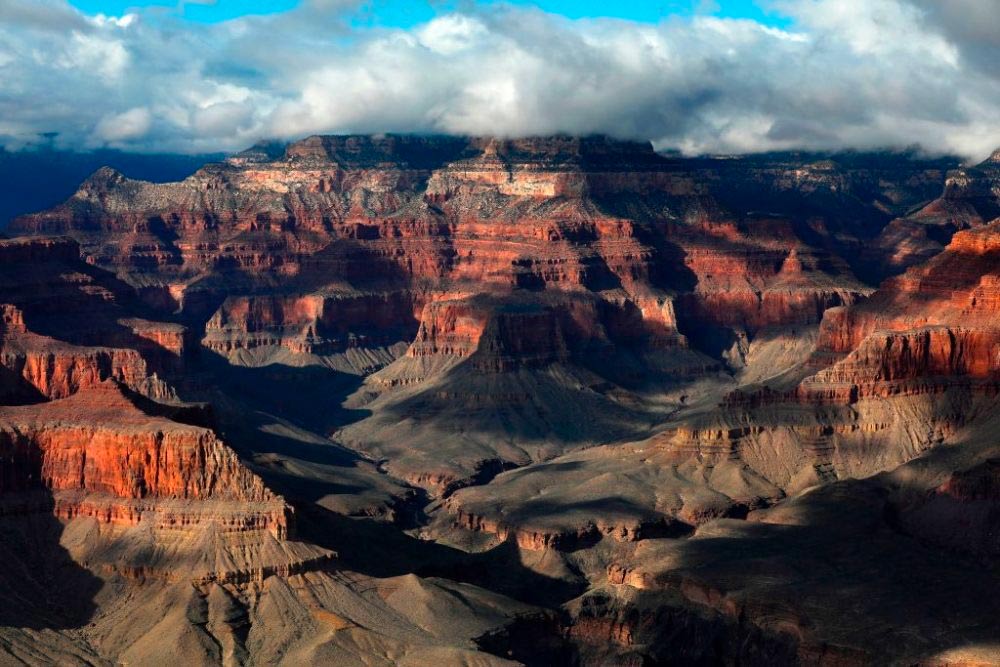 A general view of the South Rim of the Grand Canyon in Grand Canyon National Park, Arizona, on February 13, 2017.
(Rhona Wise/AFP/Getty Images)

This is part I of our Grand Canyon Centennial series.

The Grand Canyon in Arizona is among the world’s most amazing natural wonders. A century ago, the 227-mile long canyon, which is part of the Colorado River basin, was signed into law by President Woodrow Wilson as the U.S.’s 15th national park.

It’s one of the most visited national parks in the world, with more than 6 million people visiting last year alone.

Yet its layered bands of red rock still contain many geological mysteries. Geologist Wayne Ranney, author of “Carving Grand Canyon: Evidence, Theories, and Mystery,” says when tourists stay at the South or North Rim tourist areas and hotels, they only see about one tenth of the canyon.

“I would say that the main reason that it can't be completely understood is because of its immense size,” he says. “But also the Colorado River is constantly tearing away at the walls of the canyon and removing the evidence for its earliest history.”

But not all is lost. When scientists set out to explore ancient rocks and sediments, they are still “digging up secrets from the walls of the Grand Canyon,” Ranney says. 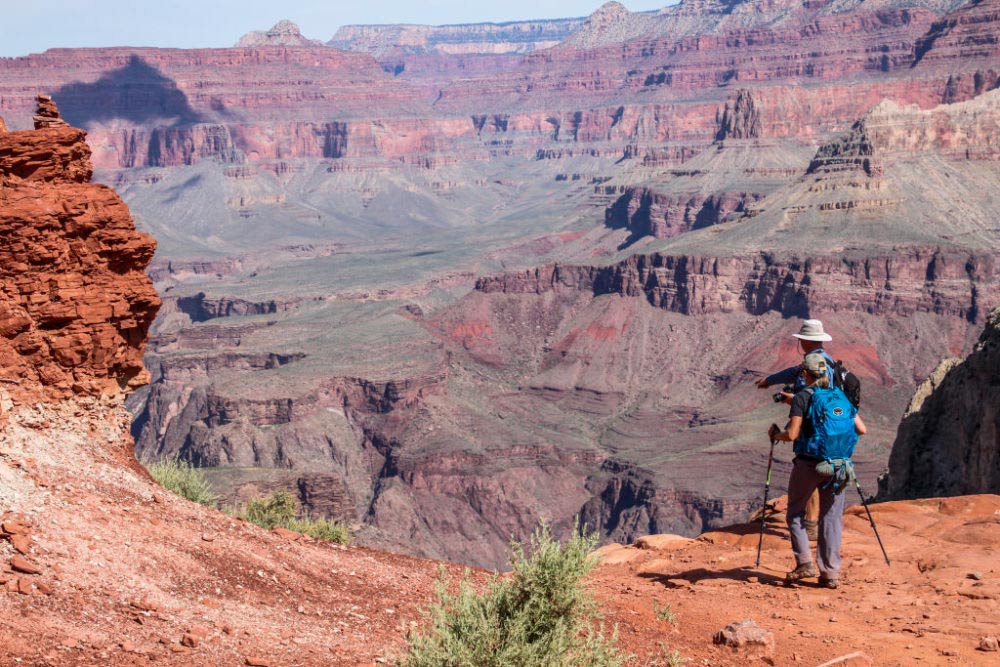 On how the Grand Canyon’s layers formed

“Well the oldest rocks in the bottom of the Grand Canyon are almost two billion years old and there is a pretty good record of sedimentation that follows after that. If you count up the different layers of limestone, there's probably been eight to 10 different seas that have inundated the Grand Canyon region over those two billion years. There's a huge stack of sedimentary rocks that are brightly colored, gently uplifted, and then incised by this large river. And it just proves to be one of the best places on Earth to take in a sweeping view for the long span of geologic history.

“Sometimes people will say, 'I heard the ocean was here once' and I have to correct them slightly and say, 'No it's been here many times,' and the different layers represent that.”

On what gives the rock its red color

“In a general sense, when we look at Red Rocks, we're typically looking at sediments that were deposited on land and the iron in that sediment reacted with the oxygen in the atmosphere and gave it these brilliant hues of reds and purples and golds. And so the sea was here all those many times. But also there's a long span of history where we had terrestrial environments, things like sand dunes and river floodplains and tidal flats, and the fossils that are preserved in these layers can help us understand this long span of Earth history.”

On how the Colorado Plateau was lifted

“Well the uplift that is responsible for the Grand Canyon happened within the last 70 million years. So we can talk about those old rocks on the scale of hundreds of millions of years but the uplift is the last 70 million years. This uplift was due to the fact that the western part of North America, its crust was being squeezed from the West, and when it was squeezed horizontally, the rock layers got thick vertically and that's what lifted up the plateau.” 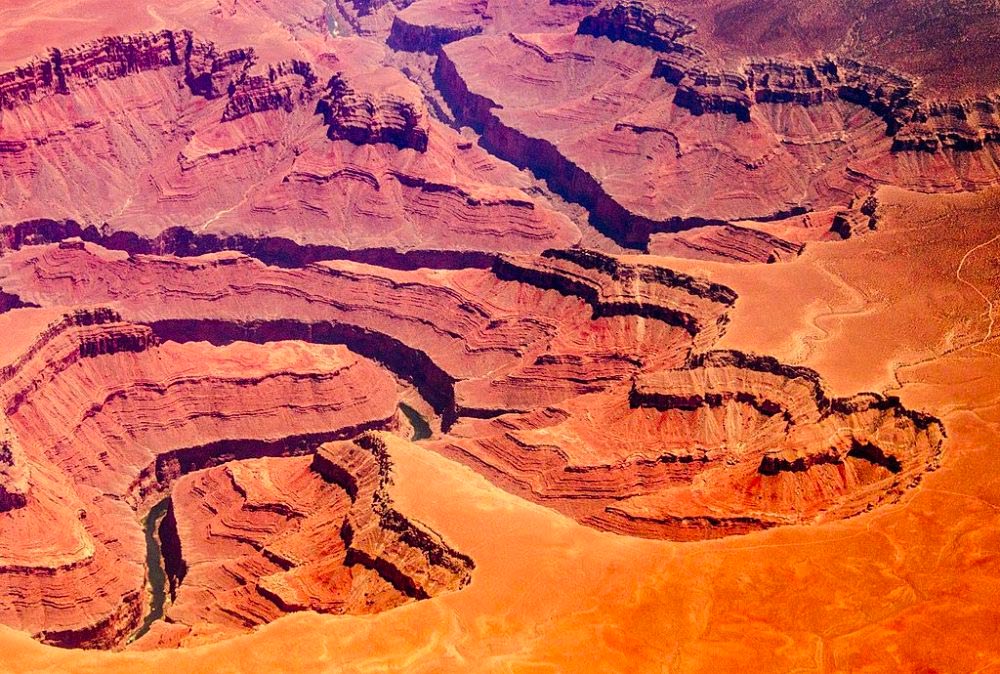 An aerial picture of the Grand Canyon in Arizona taken on July 1, 2013 from around 30,000 feet.
(Joe Klamar/AFP/Getty Images)

On how many years the plateau uplift took

“That's correct. I mean if you could live 10 lifetimes, you might have felt half a dozen earthquakes but you wouldn't have noticed that you were being uplifted. But when you look through those tens of millions of years then we can greatly uplift the Colorado Plateau.”

On how the Colorado River carved the Grand Canyon

“So one of the current ideas is that the initial cutting of the Grand Canyon was not necessarily done by the river we see today, but [by] some of the segments that later became connected and then became the Colorado River.

“We can go back to that 70 million year mark, and in that time areas to the southwest of the Grand Canyon were uplifted into a huge mountain range much like the Andes Mountains today, and prior ancestors to the Colorado River actually flowed in the opposite direction it goes today. Those rivers went from the mountains southwest of the Grand Canyon and they went out onto the surface of what is now the Colorado Plateau.”

“Well I think the wind is a very good agent to transport broken material out of the canyon. It's probably not a very big factor when it comes to actually breaking the rock apart. But once the other causes of weathering take effect, then the wind can carry that material away, and it's probably true that a lot of the material off of the Colorado Plateau is sitting out in the Rocky Mountains in the Great Plains of North America through all these millions of years.”

On what fossils can tell us about its history

“The fossils are a very good indicator of the past environments, and even those of the fossils are hundreds of millions of years old, they still give a record for what was here. In these layers of rock in the Grand Canyon, there's evidence for giant Sahara-like deserts and in those particular rocks, these sand stones that are cross bedded. You can see well-preserved reptile tracks and they let us know that this area was once very arid. The layer directly below that shows fern fossils and it can tell us that the area was humid, and there were rivers running through it. I mean it's just things are changing through time and that's what makes the Grand Canyon so special is that all of these things are preserved and protected.”

On what’s still unknown about the canyon’s geology

“I think one of the biggest things that's in debate is the period of time when the rivers went opposite that the Colorado River goes today. There is about a 16 or 20 million-year period where we lose sight of what the rivers were doing. So there a period of time that begins about 30 million years ago and then we finally get to see the river again somewhere between six and 16 million years ago. And it's going in the other direction. That's one of the things. There's three periods of uplift in the last 70 million years and geologists are trying to figure out the relative importance or amount of uplift for each of those three periods. And one of the most exciting things that's happened recently is that it looks like the upwelling of hot mantle material in the western Grand Canyon is what has carved or helped carve and deepen the western part of the Grand Canyon. There's some lava flows that have poured over the rim of the canyon and it's spectacularly preserved and plastered on the walls out there in the western Grand Canyon.” 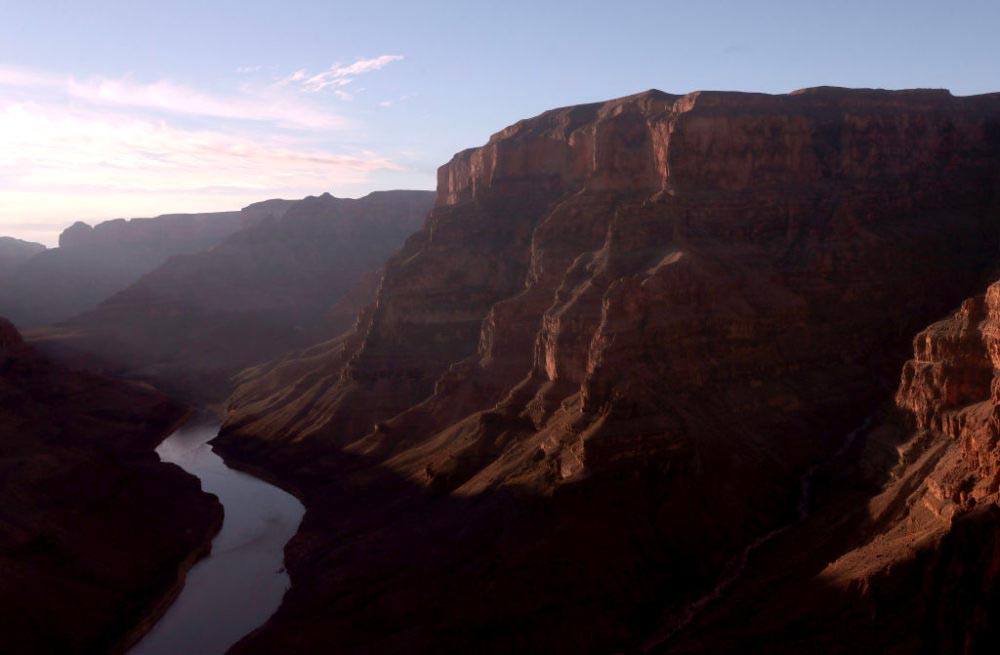 The Colorado River winds its way along the West Rim of the Grand Canyon in the Havasupai Reservation on January 10, 2019.
(Justin Sullivan/Getty Images)

On other places on Earth that captivate him as a geologist

“I've been fortunate enough to travel to 90 countries studying geology. And I keep looking for a place that approximates the Colorado Plateau and I guess I'm happy to say that there is no place. The Colorado Plateau is very unique. But a couple of places that come to mind are Northwest Argentina on the east side of the Andes. Some of the eastern parts of Morocco next to the Atlas Mountains also have similar characteristics to the Colorado Plateau. But here the Colorado Plateau —130,000 square miles — there's really no place on Earth that even approximates what we have right here in the southwestern part of the United States.”

On the Grand Canyon as an American symbol

“It's an American thing. I think if there were one landscape that people associate with America, it would be the Grand Canyon. But 40% of the visitors here come from other countries and that percentage is increasing. And so on the one hand, it is strictly an American icon. But on the other hand, it's a world icon.”

On his favorite part of studying the Grand Canyon

“My favorite thing about it is how it's constantly changing with respect to the weather and the climate and the time of day and the time of year. It's such a big place. The temperature difference from the top to the bottom can be 30 or 35 degrees Fahrenheit. The temperature differences between winter and summer can be up to 70 or 100 degrees. If you had an imaginary highway along the Colorado River and you drove along that highway at 70 miles an hour, it would still take you four hours to drive through the Grand Canyon. So as the river trip or your trip down the river unfolds, you're constantly seeing new and different landscapes even though the rock layers remain the same. They are exposed beneath three different North American deserts in that whole trip.”

Julia Corcoran produced and edited this interview for broadcast with Kathleen McKenna. Serena McMahons adapted it for the web.

Telehealth Tips: How To Make The Most Of Video Visits With Your Doctor America Amplified WAMU and NPR Announce Jenn White as New Host of 1A
By posting comments, you agree to our
AZPM encourages comments, but comments that contain profanity, unrelated information, threats, libel, defamatory statements, obscenities, pornography or that violate the law are not allowed. Comments that promote commercial products or services are not allowed. Comments in violation of this policy will be removed. Continued posting of comments that violate this policy will result in the commenter being banned from the site.