This week The Buzz talks with experts studying bats, Gila Topminnows and jaguars, and others who focus on how animals move from place-to-place. by Christopher Conover and Emma Gibson Tweet 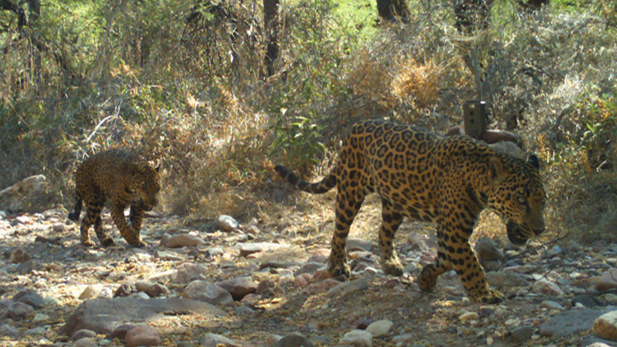 These endangered jaguars are part of a breeding population located near in Sonora, Mexico .
Northern Jaguar Project

Bat biologist Debbie Buecher said there are 28 species of bats in Arizona, and while she was researching her master's degree, she caught 17 at Sabino Canyon.

Not only do bats play an important role in mitigating mosquito and other insect populations, but they also pollinate local plants like saguaros.

Buecher said when she was asked what threatened bats back in the ‘80s she would discuss roost disturbance, but now she focuses on habitat loss, groundwater pumping, and wind energy.

“They started finding dead bats [by wind turbines]. But there were no broken bones, it wasn’t like they’d be hit by a turbine. What had happened is, behind those turbines as they’re spinning is a vacuum, and the bats fly into that and it collapses their lungs and they just fall out of the sky," Buecher said.

She said this happens when the winds are low, the blades are spinning, and bats are out feeding. Some biologists are trying to address the issue by working with the wind farms to adjust the blades, so they aren't spinning during periods of low energy intake.

In that same vein, fish biologist Doug Duncan with the U.S. Fish and Wildlife Service said the Gila Topminnow, which is found in the Santa Cruz River near Tucson and Nogales, at one time was considered the "most common native species in the Lower Colorado River Basin", yet now it's considered endangered.

There is some hope for the Gila Topminnow. After water quality cleanups, the species is coming back to the Santa Cruz River.

A 2019 petition to remove the fish from the endangered species list or downgrade it to threatened is still being analyzed by the U.S. Fish and Wildlife Service but should be resolved in the coming year.

The wildlife crossing bridge across Oracle Road north of Oro Valley has been put to use at least 15,000 times by local wildlife since its construction. Carolyn Campbell with the Coalition for Sonoran Desert Protection said about 20 years ago voters passed the Regional Transportation Authority plan that included funding for wildlife infrastructure, like underpasses or overpasses, and that funding built the wildlife crossings on Oracle Road.

Ganesh Marin, a Ph.D. student at the University of Arizona, also focuses on how animals move through ecosystems.

He's looking at which mountain corridors certain animals, like jaguars, prefer. He said diversity needs water, so movement is also connected to the loss of cooler environments.

"Hence, we lose the opportunity to have more jaguars because of climate change, and if we lose the rivers, the streams, the riparian areas, we're going to lose the connectivity between different mountain tops and this could be critical to the maintenance of the population in the long term," Marin said.

Diana Hadley is the co-president of the Northern Jaguar Project in Sonora, Mexico about 100 miles south of Douglas, Arizona. The 58,000-acre reserve's goal is to not only preserve jaguar habitat but also reduce conflicts with humans.

"We would love to see jaguars returning to their former habitat in the United States along the international border," Hadley said.

They partner with local Sonoran ranchers to not harm jaguars, mountain lions, ocelots, and bobcats, or the big cats' prey base.

The project, Hadley said, has also shown that jaguars are not attacking the cattle raised by the ranchers in Sonora.

Hadley said she hopes the project can expand and more jaguar habitat can be restored.

Looking back at 2021 Pygmy Owl may get protection again Gila topminnow repopulate native waters
By posting comments, you agree to our
AZPM encourages comments, but comments that contain profanity, unrelated information, threats, libel, defamatory statements, obscenities, pornography or that violate the law are not allowed. Comments that promote commercial products or services are not allowed. Comments in violation of this policy will be removed. Continued posting of comments that violate this policy will result in the commenter being banned from the site.