Camera As Art: 'It's Not Just a Tool'

Tucson photographer Wayne Martin Belger has exhibited nationally and abroad, and he’s known for his dreamlike explorations of people and landscapes. 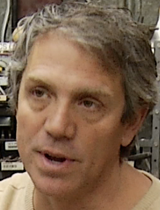 Belger perhaps more noted for the meticulously crafted cameras he produces for each project.

Each of his cameras is intended as an integral part of the photographic process, Belger says, and each serves as a way to delve into a specific topic.

“It’s all dedicated to a subject I want to learn about,” Belger says. “I make my own cameras, and each camera is designed for the subject it shoots.”

Belger, an accomplished machinist, manufactures all the individual parts and assembles the cameras using artifacts related to the subject-matter.

His 9/11 camera, for example, includes a piece of a support beam from the World Trade Center and aircraft-grade aluminum from Boeing, and is intended to explore Abrahamic religions.

His training as a photographer is limited, Belger says, and his relationship to the camera is perhaps different from how most photographers view their equipment.

“It’s not just a tool,” he says. “I come from a long line of tool makers, so when I became a photographer, the camera became an absolute extension of myself.”

Photographer Strives to Capture Vanishing Culture Getting "Anti-Social" with author Andrew Marantz. Arizona Spotlight Special: Arizona Addicted
By posting comments, you agree to our
AZPM encourages comments, but comments that contain profanity, unrelated information, threats, libel, defamatory statements, obscenities, pornography or that violate the law are not allowed. Comments that promote commercial products or services are not allowed. Comments in violation of this policy will be removed. Continued posting of comments that violate this policy will result in the commenter being banned from the site.