Re-evaluating Border Patrol's Use Of Force

The United States Senate is taking up the immigration bill this week amid demands from members of Congress to strengthen border security. But there are also calls for a re-evaluation of the U.S. Border Patrol’s use of force. Investigations into these cases are hidden from public view and can drag on for years.

Taide Elena lives in a small mobile home park in Nogales, Ariz. The wooden fence that surrounds her home sways in the breeze of a windy morning. Some of her youngest grandchildren play in her neat living room. She shushes them and sends them off to one of the bedrooms.

Then she speaks about her dead grandson, Jose Antonio Elena Rodriguez.

Nine months ago, the teenager was shot and killed by Border Patrol agents. The agents said they were defending themselves against a hail of rocks thrown at them from the Mexican side of the border. Police reports describe a hectic few minutes where federal agents came under attack, and then an agent and possibly two fired into Mexico. 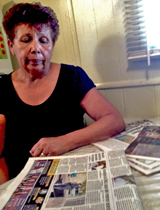 Taide Elena looks at a newspaper account of her grandson Jose Antonio Elena Rodriguez's killing. He was shot by a U.S. Border Patrol agent in October 2012 (PHOTO: Michel Marizco)

Elena and her family say the boy was innocent. A witness reports he wasn’t even with the group attacking the agents.

Terry Kirkpatrick retired as an Immigration and Customs Enforcement official in 2010. He describes these border shootings as extremely chaotic scenes where agents may be fearing for their lives.

"Everything happens very quickly. I mean the whole thing can be over, start to finish, in less than three minutes and it seems like it’s taking hours," he said.

Still, he questions why, if the agents had time to fire through the bars of the border fence into Mexico, they didn't retreat instead.

"I would be questioning, if it was one of my agents, as to why that happened," Kirkpatrick said.

In the past year, the Border Patrol has come under criticism for its use of force policy. Since 2010, agents have killed 17 people along the U.S.-Mexico border. The policy states agents can shoot to defend themselves if they feel their life is at risk.

And in each case, agents say they were being attacked with rocks, cars, or some kind of physical assault.

But it’s not always clear if the person shot was actually involved in assaulting the agent. That’s especially true in the seven cases involving an agent firing into Mexico. Under the immigration reform bill, proposed changes to the policy are small. Within six months, Homeland Security and the Justice Department must establish a policy for accepting and investigating complaints.

In the October case, neither the public nor the family of the dead teenager know the name of the agent involved.

Michael Nicley was chief of the Border Patrol in Tucson for three years. He says the lack of transparency in Border Patrol shooting cases is what leads to the criticism.

"The public understands the Border Patrol needs to use deadly force from time to time. But they do not understand why the government doesn’t tell them 'these are the circumstances, the agent did exactly what he was supposed to do and unfortunately someone was killed,'" Nicley said.

Of the 17 cases since 2010, all but a few remain in some sort of investigation or wrapped up in civil lawsuits.

For Taide Elena, it’s been nine months since the killing.

To this day, the FBI has the case but hasn’t contacted the family or told them anything about the investigation.

"Nothing, nothing," she said. "It's what hurts the most."

Michel Marizco is a Senior Field Correspondent for the reporting project Fronteras, The Changing America Desk.

NPR Report: Border Patrol Deadly Force Questioned Border Patrol Uses Eminent Domain for Land to Build Security Tower In Phoenix, Zombie Subdivisions Wake From Slumber
By posting comments, you agree to our
AZPM encourages comments, but comments that contain profanity, unrelated information, threats, libel, defamatory statements, obscenities, pornography or that violate the law are not allowed. Comments that promote commercial products or services are not allowed. Comments in violation of this policy will be removed. Continued posting of comments that violate this policy will result in the commenter being banned from the site.