The Emerging Language of Transpoetics

It was inspired by an anthology co-edited by local poet TC Tolbert, called Troubling the Line: Trans and Genderqueer Poetry and Poetics

It’s the first collection of its kind, and includes the work of 55 transgender and genderqueer poets.

Tolbert, who serves as assistant director at Casa Libre, wanted to have a live discussion with other poets about the intersections of gender, transgender and poetry – “transpoetics,” for short.

A hundred poets and writers from Tucson and around the nation attended the keynote address, curious to learn about “transpoetics.” 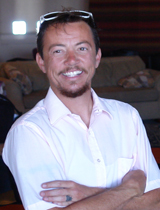 “This conference is a love letter to my younger, genderqueer self who felt incredibly alone, and felt like, ‘There’s no way there’s anyone else like me,’ ” says Tolbert.

There’s a common theme among trans and genderqueer writers, and that’s the pain and despair they felt growing up different from everyone around them.

Tolbert explains: “So often the narrative about transgender and gender queer people is we’re either comedic relief because we’re so funny and weird, or we’re victims. That’s true too. A trans person is murdered every other day for being trans. I was desperate to see trans and genderqueer people living full, complex, happy lives.”

Tolbert teaches creative writing at the University of Arizona, where he earned a Master’s. It’s awkward to pick a pronoun here because Tolbert isn’t exactly a “she,” and isn’t exactly a “he.”

“I’m transgender in that I have a female body and I’ve transitioned to live as a masculine person. A lot of people would refer to me as a guy.”

It should be noted: Tolbert has a beard.

“Which I’m very excited about!” Tolbert says, and then laughs.

If you believe that biology assigns us, at birth, either to the pink team or the blue team, how do you make sense of transgender?

“Experience of gendered identity does not ‘match’ what our society or culture expects based on birth sex,” explains Tolbert.

“A lot of times when folks think of someone who is transgender they think of someone who is also transsexual. So someone who has taken steps to change their body. So someone who’s on hormones or who’s had surgery to transition. And ‘genderqueer’ is a bit more fluid. It’s more of a liminal or middle space. It can also be a more political identity. I use it to foreground the fact that I don’t feel like a man trapped in a woman’s body. I feel very connected to my female self and very connected to my masculine presentation.”

Tolbert sometimes uses the pronoun he/she to describe him/herself. Our language falls short when it comes to describing transgender experience. That’s where poetry can help.

“I could do things in language and create a world for myself that I didn’t know how to inhabit with my body.”

The physical body is not as malleable as the textual body. Tolbert found that through poetry, he/she could make any “body” on the page. 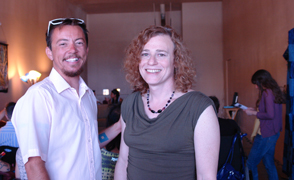 “I cannot separate my body, my identity, from my poetics,” explains Tolbert. “I do identify as a trans and genderqueer and feminist writer. All of those things. My ideal poem is a simultaneous poem. I want to take all three of those descriptors and lay them on top of one another because that’s who I am all at the same time. If I can figure out how to do that in a poem, I can be done!”

Rainer Maria Rilke, who admired the sculptor Rodin, used to wonder how it would be possible to write a poem that could stand up and be three-dimensional, so a person could walk around it. If any poet came close, it was Rilke, who was raised as a girl until the age of six or seven!

“And,” adds Tolbert, “who says, ‘To love the questions themselves.’ For me as a trans and gender queer writer, that is a way of life. That is a way of writing.”

Like TC Tolbert, Joy Ladin is a trangender poet. Language was also a refuge for her from very early in life.

“I grew up writing poetry and that was the only time I felt I was really alive,” says Ladin. “Because it was the only thing I could do that was not part of this horrible nightmare of sex and gender that I was stuck in as someone who had a male outside, which grouped me with the boys, and a female gender identity that made me feel I rhymed with girls.”

Ladin holds the David and Ruth Gottesman Chair in English at Yeshiva University’s Stern College for Women. She’s written a memoir called Through the Door of Life, and six volumes of poetry. She was the keynote speaker at the Transpoetry Symposium.

“One of the things that’s cool about not being able to finish the sentence ‘I’m,’ even though I’m in my 50s, is that it means that my identity is an uncomplete-able process, which is one of the great human truths,” Ladin told symposium attendees.

That shifting state of “becoming” was excruciating for Ladin. She tried to kill herself several times. When she finally made the transition, it shattered her family.

Ladin remembers getting advice from someone online before she made the transition.

“One trans guy in Canada said, ‘When you transition, people will tell you, you have a lot of courage. I tell them it doesn’t take much courage to run out of a burning house.’ Some people transition before the house is burning down, but I didn’t. For the sake of my family was determined to die as someone I knew that I wasn’t. And then I started falling apart so my house was burning down. But I’ve come to realize it actually does take courage to run out of a burning house.”

TC Tolbert calls Joy Ladin the “godmother of transpoetics.” So what, exactly, is transpoetics? Is it just a transgender person writing a poem?

“I’m a poet and I sometimes write explicitly about trans experience,” Ladin says. 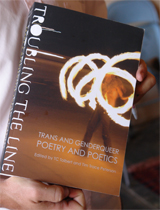 “When you say ‘poetics,’ you’re talking about the building blocks of making poetic experience. And that I think is different. What makes something poetry is not denotation. So when you write about autumn: “In autumn, the leaves on the trees turn and it gets windy and cold,” the odds of that being experienced as poetry are pretty small. They’re small not because you’re doing something wrong with language – denotation and description are important parts language. But it’s small because poetry works by layering, overlapping and creating collisions between different kinds of semantic and linguistic systems.”

Ladin continues. “The use of language triggers neurons to fire all over the brain. So poetry is kind of like creating fireworks inside the reader’s brain. Some of those fireworks point us to specific parts of experience. So the experiences of being in between, the experiences of sliding back and forth, the experiences essentially of being a kind of thing for which your culture and world doesn’t have adequate terms, but which still is.”

During her talk at the Symposium, Ladin told the gathering of transgender and genderqueer poets: “You don’t need to resolve these problems as poets. You need to just find ways to enact them. Make your problems your reader’s problems. Give your readers the trans experience. Don’t wrap it up into in a referential bow – or do! What kind of syntax do you need? Maybe you do need new nouns; maybe you need new verbs; maybe you need new verb tenses. English has a lot of underused and unused verb tenses. There’s all kinds of stuff you can do with the English language that most poets don’t do most of the time.”

Language is being invented all the time, says Ladin.

“We tend to forget how quickly things are changing. The word “transgender” probably is about 15 years old. And until you had that umbrella term, you couldn’t have an anthology of transgender and gender queer poetry and poetics like Troubling the Line, which is the first of its kind. And without that you wouldn’t have had this kind of Symposium. So what we’re seeing is an extremely accelerated process of historical development.”

TC Tolbert and Joy Ladin hope that transpoetics will continue to build new language that describes and celebrates the queerly gendered. They hope it will make life easier for those who live in the hard-to-define spaces between the binary of male and female.

To find out more about services and support for transgender people and their loves ones, contact the Southern Arizona Gender Alliance.

Listen to poet TC Tolbert read his/her poem, How Do You Say And When You Say End:

A Lifelong Love of Learning and Teaching 40 Years of Chronicling Gay Experience The Dave Stryker Quartet kicks off the 2022 Tucson Jazz Festival.
By posting comments, you agree to our
AZPM encourages comments, but comments that contain profanity, unrelated information, threats, libel, defamatory statements, obscenities, pornography or that violate the law are not allowed. Comments that promote commercial products or services are not allowed. Comments in violation of this policy will be removed. Continued posting of comments that violate this policy will result in the commenter being banned from the site.