Q & A With John Sebastian

Rock and Roll Hall of Famer will perform at the Musical Instrument Museum in Phoenix Nov. 17, 18. Tweet

Rock and Roll Hall of Famer John Sebastian will be at the Musical Instrument Museum in Phoenix Sunday.

Music critics say he is an old folkie like Dave Van Ronk, and a conveyer of authenticity like Bob Dylan. Jake Feinberg spoke with Sebastian about the need for backbeat and how to sing your way out of a Florida jail.

The latter portion of the sixties was a gymnasium of live venues which permeated sounds of acoustic instruments like Fritz Richmond's washtub base or Paul Harris' ivory for the evening. An even dozen sophisticated white musicians trying to play authentic roots music with their mentors. 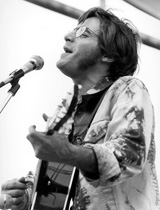 Through these live venues, audiences saw the visceral qualities of Tim Hardin, Sivuca, Odetta and my guest all in one week. The differentiation the non-conformity in a non-violent way all the while playing music that was made live and not manufactured.

John Sebastian was inducted into the Rock and Roll Hall of Fame at the turn of the century, but he is more roll than rock.

Sure he appreciated the Beatle mania and some of the world culture they brought to the states. But he wanted to plant the American flag in the heart of the country with a blending of Native American, folk, classical blue ridge mountains cooking burning instrumentals and singing his way out of prison in some back road Georgia town looking for Doc Watson or a Lovin Spoonful of the Tarzana Kid.

He has been able to maintain and stay true to his art which can be hard in the biz. He is an old folkie like Dave Van Ronk and a conveyer of authenticity like Bob Dylan.

He cares about community. He lives in an artist enclave that sells nostalgia t-shirts but still has a freshness from the Catskills, near the Berkshires because your a big boy now.

Sebastian will play Nov. 17 at the Musical Instrument Museum in Phoenix, and the show sold so fast they added a second show for Nov. 18.

The Rogue Theatre presents "A White Heron". The Desert Blooms in a Bountiful Monsoon. "Confessions of a Vintage YA Book Reader".
By posting comments, you agree to our
AZPM encourages comments, but comments that contain profanity, unrelated information, threats, libel, defamatory statements, obscenities, pornography or that violate the law are not allowed. Comments that promote commercial products or services are not allowed. Comments in violation of this policy will be removed. Continued posting of comments that violate this policy will result in the commenter being banned from the site.