Tales of Tucson: "All Souls Laid to Rest"

While searching for friends at the All Souls Procession, a woman encounters a masked man who may be more than he seems... by Laura Markowitz Tweet 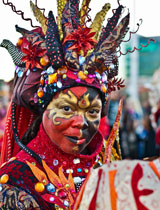 To-Ree-Nee Wolf Keiser as an urn attendant at the 2013 All Souls Procession (PHOTO: Dominic Bonuccelli)

Series co-producers John Vornholt and Laura Markowitz have each explored different forms of storytelling throughout their careers. Markowitz is a novelist and National Magazine Award-winning feature writer, in addition to being a a contributing producer to Arizona Spotlight. Vornholt is a New York Times best-selling author of over 65 novels, as well as plays, radio dramas and screenplays. He is also a theatrical producer and director.

Tales of Tucson Episode One: “All Souls Laid to Rest” features the voices of Bree Boyd-Martin, Roger Owen, To-Ree-Nee Wolf Keiser, Meagan Jones and Armen Serrafian amid the sounds of the 2013 All Souls Procession.

While searching for her friends among the costumed crowd at the All Souls Procession, Kate encounters a man in a skeleton mask who turns out to be more than he seems...

All Souls: Tucson's Annual Celebration of Life and Death Tales of Tucson: Dillinger's Last Love All Souls Procession: Celebrating Cycle of Life
By posting comments, you agree to our
AZPM encourages comments, but comments that contain profanity, unrelated information, threats, libel, defamatory statements, obscenities, pornography or that violate the law are not allowed. Comments that promote commercial products or services are not allowed. Comments in violation of this policy will be removed. Continued posting of comments that violate this policy will result in the commenter being banned from the site.