Valley of the Moon is a private park tucked away in a quiet neighborhood just north of Winterhaven. After 90 years, it’s still an oasis for children of all ages. by Laura Markowitz Tweet 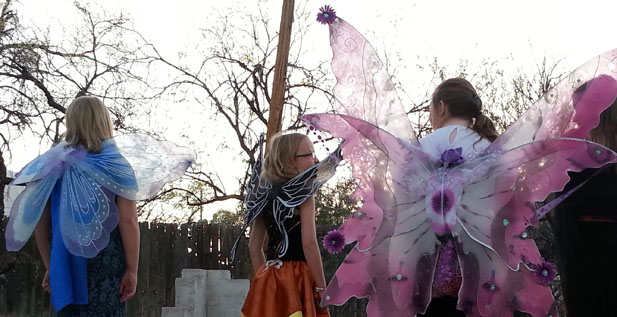 Fairy visitors at Valley of the Moon
Laura Markowitz

Valley of the Moon is a private park tucked away in a quiet neighborhood just north of Winterhaven. After 90 years, it’s still an oasis for children of all ages who want to believe in magic and fairy tales. Laura Markowitz brings us the story.

The activities at Valley of the Moon haven’t changed a whole lot since it opened in the 1920s. On the grassy field in the center of the two-and-a-half-acre park you might find a singalong campfire, or storytelling circle, or an original theater production of a classic fairy tale, like Thumbelina. It’s low-tech; old-fashioned.

“We spend a lot of time today with Netflix or watching cable TV or playing with our phones,” says Valley of the Moon nonprofit board president Zack Jarrett. “This is a place we can purposefully get away from that.” 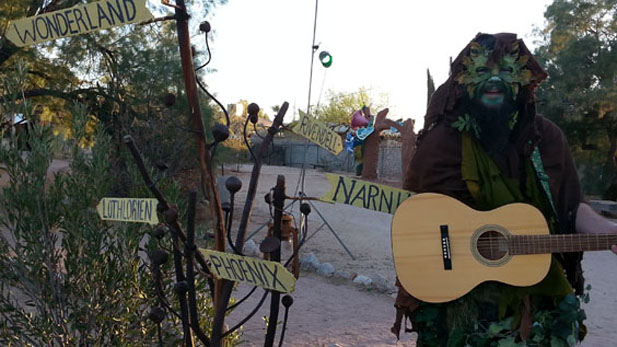 Valley of the Moon was built in the 1920s by a part-time postal clerk named George Phar Legler. He used cement, stones from his neighbor’s land and sand from nearby the Rillito River, and he built storybook structures in his park, like a troll cave and wizard’s tower and fairy garden. Everything was built especially for children, so adults have to crouch down to go through the rabbit hole and under the dragon’s teeth. Tucked into rock crevices and under bushes are small, faded figurines of fairies, toads, flowers and other magical creatures.

“So when kids walked by they could see what fairies actually looked like up close,” says 9-year-old Gabe Roberts, who is a member of the volunteer cast of Thumbelina. 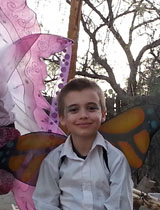 Gabe Roberts plays a fairy at Valley of the Moon

According to Jarrett, Legler believed imagination was good for children. “He thought that if you could just teach children to be kind before the age of five or six, they would grow up to be kind adults. And the point at the end of every tour he gave was that kindness wins in the end.”

Legler eventually moved out of his own house, which was just across the street, and into a tiny, cave-like room at Valley of the Moon. He dressed in black costume, including a veil and called himself the Mountain Gnome. He took children on tours and told them about the magical creatures that lived at Valley of the Moon. Zack Jarrett says George Legler actually believed in fairies. He built Valley of the Moon to be a safe haven for fairies, gnomes, dwarves and other invisible folk. Legler was a Spiritualist.

“Spiritualism was a pseudo-religion of the late 1800s to early 1900s,” explains Jarrett, “whose practitioners believed in the actual existence of fairies and ghosts and spirits.”

In fact, George Legler was a member of the Fairy Investigation Society – a real organization -- and so was his contemporary, Walt Disney. Disney famously went on to pioneer new animation techniques that made Tinkerbell fly across the screen. George Legler built Valley of the Moon.

“Disney is a little bit cool,” admits Gabe Roberts, “but something this small can look really big -- bigger than technology, too.

Gabe’s father, Jeremy Roberts, is delighted with the influence Valley of the Moon has on his son. “We definitely try to encourage Gabe to go play imaginatively, to leave the electronics behind. And Valley really is perfect for that.”

“Valley mostly warms everyone’s heart,” says Gabe. “The second they get here they’re like, ‘Wow, this really is a beautiful place.’ ”

Jeremy Roberts is struck by how George Legler created his own vision of the world at Valley of the Moon. “It’s really kind of cool what he put up here without worries about what anyone else thought about any of it.”

After 90 years, the concrete and stone construction is worn and shabby in places, like a well-loved toy. The Tucson Historical society is working with Valley of the Moon to designate the 90-year-old site as a Tucson Historical Landmark. They hope to protect George Legler’s legacy -- and the city’s only safe haven for the fey folk -- well into the future. 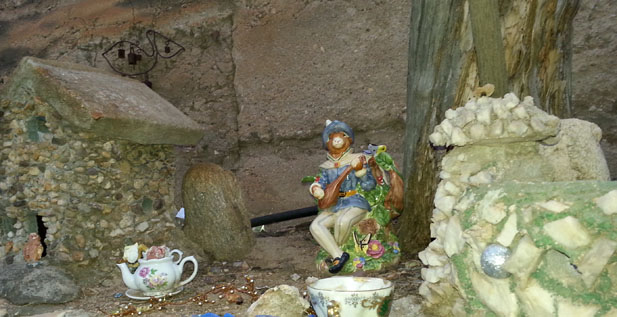 Tales of Tucson: 'Forever Home' Has "Star Trek" changed the world? Author Ryan Britt examines a legacy lasting 50 years... and beyond. One Tucsonan’s journey to becoming emotionally accountable -- and taking a stand against oppression.
By posting comments, you agree to our
AZPM encourages comments, but comments that contain profanity, unrelated information, threats, libel, defamatory statements, obscenities, pornography or that violate the law are not allowed. Comments that promote commercial products or services are not allowed. Comments in violation of this policy will be removed. Continued posting of comments that violate this policy will result in the commenter being banned from the site.