Though not recognized as a state holiday, Arizonans have celebrated an important date in the history of freedom for 44 consecutive years. by Laura Markowitz Tweet 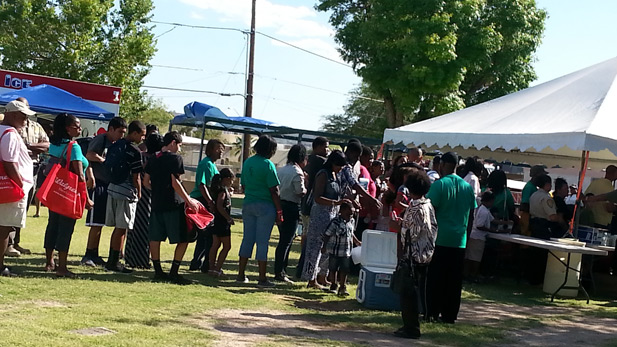 June 19, also called “Juneteenth,” marks the day when the last slaves in the United States were freed. This year, a diverse community participated in Tucson’s 44th annual Juneteenth Freedom Festival, and the organizers emphasized Juneteenth is not just for African Americans.

The Emancipation Proclamation took effect in 1863, but not until two and half years later did word reach the slaves in Texas. In Galveston, on June 19, 1865, the last slaves were informed that they were free. That day became known in Texas as “Juneteenth.”

“When that day happened,” says Burney Starks, president of Tucson’s Juneteenth Committee, “it is said, it was met with great celebration and people saying, ‘This is going to be celebrated about the same as American Independence Day.’ “ 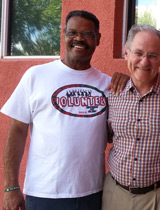 “When you talk about the day the last American in this country, the land of the free, was actually freed, that’s a significant date in the history of the United States of America," he says. "Not just for black people. This is not a black holiday. This is an American holiday, and that’s the way we need to accept it.”

In the past few years, the Tucson celebrations have been changing in a subtle way. The chair of the Juneteenth Festival committee, Esther Sharif, is working to make Juneteenth appeal to Tucson’s diverse community.

“We emphasize here at Juneteenth the celebration of freedom for African Americans,” she says. "But we also want people to leave away saying, “We learned about African Americans; so I need to learn about my own.”

Many of the Juneteenth participants are volunteers.

There are two large rooms filled with information tables for all kinds of community partners and organizations: the Buffalo Soldiers, the State’s Attorney, black-owned businesses, the Tucson Police and Fire Departments, as well as Tucson health organizations, businesses and nonprofits.

Deputy Tracy Suit, spokesman for the Pima County Sheriff, staffs an information table for the department. He’s African American, and he likes the idea that Juneteenth belongs to the whole community and not just to African Americans.

“We’re all here together. It’s a big melting pot. We all should share in everyone’s successes," he says.

Juneteenth is a celebration of freedom, but awareness of what happened during slavery and the continuing racism in America can also be part of the Juneteenth celebration.

Did "Star Trek" change the world? Author Ryan Britt examines a legacy lasting 50 years and beyond. One Tucsonan’s journey to becoming emotionally accountable -- and taking a stand against oppression. Praising the earned beauty of "The Crone Body".
By posting comments, you agree to our
AZPM encourages comments, but comments that contain profanity, unrelated information, threats, libel, defamatory statements, obscenities, pornography or that violate the law are not allowed. Comments that promote commercial products or services are not allowed. Comments in violation of this policy will be removed. Continued posting of comments that violate this policy will result in the commenter being banned from the site.