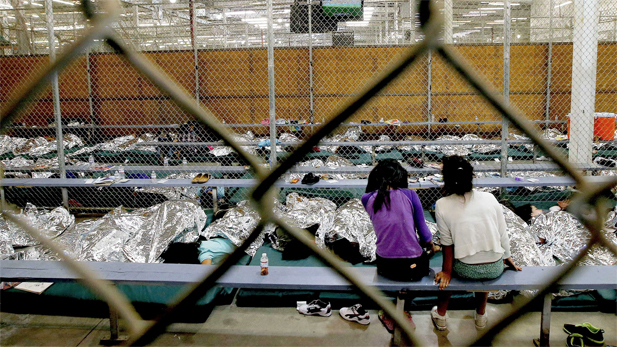 Children and teens from Mexico and Central America inside a Border Patrol detention facility in Nogales, Ariz., in 2014.
AP

The influx of unaccompanied immigrant children "will put an added financial burden on our local school districts, our education resources and ultimately Arizona taxpayers," said John Huppenthal, the state's superintendent of public instruction.

Huppenthal wrote a letter to U.S. Secretary of Education Arne Duncan, asking for additional funds to pay for the "added educational expenses of those school-aged illegal immigrants being re-located to Arizona."

Huppenthal, who is running for the Republican nomination to be re-elected as schools chief, held a press conference in Phoenix Wednesday to make the announcement.

From October of last year to June 30, there were 57,525 unaccompanied minors apprehended trying to cross into the U.S. illegally through the Southwest border, according to U.S. Customs and Border Protection.

More than 5,400 of them were process at the Nogales Placement Center warehouse for days, but it is unknown how many of them remained in Arizona after they were released to the custody of the U.S. Health and Human Services.

HHS’ Office or Refugee Resettlement places the children in temporary shelters as it tries to reunite them with family members in the U.S.

From January to July 7, the Office of Refugee Resettlement released 186 children to relatives or sponsors in Arizona.

Huppenthal said if those children attend public schools in Arizona, it would cost the state $5,082 per student.

Hundreds more remain in shelters, such as the one in Tucson, where children have started classes taught by visiting teachers inside the shelter.

The Arizona Department of Education is not involved in those teaching efforts.

Students At Risk of Dropping Out Get Surprise Visits from Tucson Officials Schools Chief Races Focus on Common Core, Finances Unaccompanied Children at Tucson Shelter to Start Classes
By posting comments, you agree to our
AZPM encourages comments, but comments that contain profanity, unrelated information, threats, libel, defamatory statements, obscenities, pornography or that violate the law are not allowed. Comments that promote commercial products or services are not allowed. Comments in violation of this policy will be removed. Continued posting of comments that violate this policy will result in the commenter being banned from the site.