Final Gubernatorial Debate: Differing on How to Grow Arizona Economy 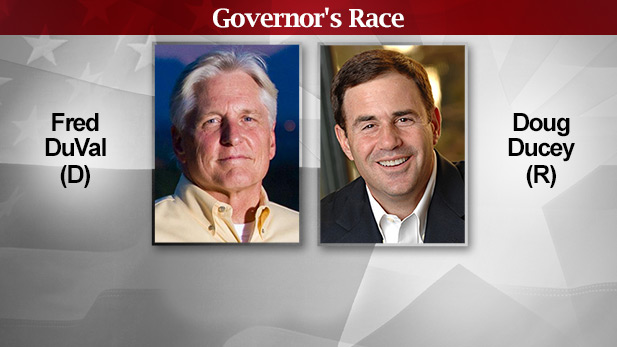 Different philosophies on growing the state's economy and rebuilding an education system damaged by budget cuts dominated the final debate between the Republican and Democratic candidates for Arizona governor.

Republican Doug Ducey said at Tuesday's debate that cuts to state regulations a simpler, fairer, flatter, tax code will boost the economy. He rejected criticism that he has called for eliminating state income taxes.

"No one's ever talked about eliminating the income tax," he told an audience in Phoenix suburb Paradise Valley. Instead he said his goal is simply to drive it "as close to zero as possible."

At Ducey's website, his first "pledge to the people of Arizona" says: "Submit legislation to reduce taxes every year, with the goal of eliminating personal and corporate income taxes in Arizona."

In an earlier debate in Tucson, Ducey pushed Democrat Fred DuVal to promise not to raise taxes. DuVal has called for targeted tax cuts but has said improving education is the best way to grow jobs and the economy.

DuVal in Tuesday's discussion called Ducey's tax-cutting plan unrealistic at a time when the state is facing a deficit of more than $1.5 billion in the coming two years. But DuVal offered no specifics on how to reduce the deficit, instead calling for more spending on education.

Study: More College Grads Would Boost State Economy Episode 194: Third-Party Governor Candidates Take on Economy, Immigration Arizona voter registration deadline nearing
By posting comments, you agree to our
AZPM encourages comments, but comments that contain profanity, unrelated information, threats, libel, defamatory statements, obscenities, pornography or that violate the law are not allowed. Comments that promote commercial products or services are not allowed. Comments in violation of this policy will be removed. Continued posting of comments that violate this policy will result in the commenter being banned from the site.