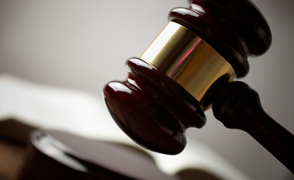 The U.S. 9th Circuit Court of Appeals has struck down an Arizona law denying bail to certain undocumented immigrants.

Arizona voters passed Prop 100 in 2006, denying bail to people in the country illegally and who are arrested for other "serious" felonies.

The judges on the 9th Circuit say the law violates the constitutional right of due-process.

The court wrote the law is excessive and is not tailored narrowly enough to serve a compelling interest.

Judge Jacqueline Nguyen wrote Prop 100 was drafted to intentionally punish immigrants, who have illegal status, even if they pose no risk.

Court Reviews Law Denying Bail to Undocumented Immigrants CBP head defends accelerated border expulsions, blames migrants for increasing COVID-19 risk Border Patrol agents raid No More Deaths migrant aid camp
By posting comments, you agree to our
AZPM encourages comments, but comments that contain profanity, unrelated information, threats, libel, defamatory statements, obscenities, pornography or that violate the law are not allowed. Comments that promote commercial products or services are not allowed. Comments in violation of this policy will be removed. Continued posting of comments that violate this policy will result in the commenter being banned from the site.