The Navajo Nation president Tuesday vetoed legislation that would have changed the language fluency requirement for tribal candidates. 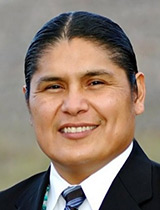 The bill would have let voters decide whether presidential hopefuls should be proficient in the Navajo language.

If signed by Navajo President Ben Shelly, the legislation may have allowed disqualified candidate Chris Deschene back in the presidential bid.

Last week, the tribe's high court suggested the Nov. 4 Navajo presidential election must be postponed. They also ordered an immediate reprint of ballots without Deschene's name.

Navajo Nation election officials met Friday but did not take action on the court's order. The Navajo Board of Election Supervisors argued there are still questions on how to implement the ruling.

That decision is now being challenged by attorneys representing the two men who confronted Deschene over his Navajo language fluency.

Navajo Nation Elects Russell Begaye Navajo Nation Presidential Election Scheduled Tuesday Navajo Nation Cancels Presidential Election
By posting comments, you agree to our
AZPM encourages comments, but comments that contain profanity, unrelated information, threats, libel, defamatory statements, obscenities, pornography or that violate the law are not allowed. Comments that promote commercial products or services are not allowed. Comments in violation of this policy will be removed. Continued posting of comments that violate this policy will result in the commenter being banned from the site.