No Decision Yet in Arizona Schools Superintendent Race 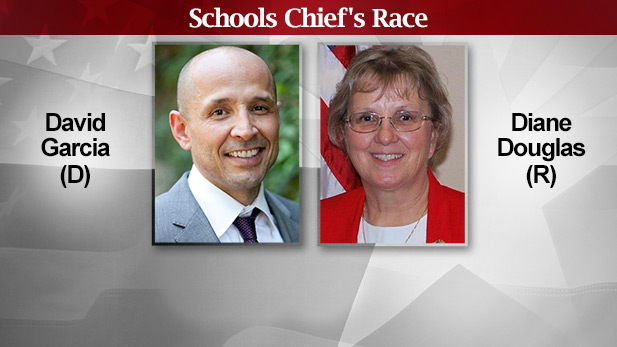 Republican Diane Douglas, who didn't have the support of many in her own party, now has a close to 28,000 vote lead over Democrat David Garcia in the race to be Arizona's next superintendent of public instruction.

There are still thousands of ballots to be counted in the state.

The candidates' stances on implementing the Common Core teaching standards were polar opposites.

Known in Arizona as the College and Career Ready Standards, they were adopted by the State Board of Education in 2010. The standards encourage critical thinking, while doing away with multiple-choice tests.

Garcia supports the standards and has said, if elected, he would focus on how to implement the standards “in a way that benefits Arizona students.”

Douglas opposes what she has called, “standards that are not going to prepare our children the way it needs to, it's untested, unproven and it hasn’t been shown to be internationally benchmarked.”

Republican Douglas Wins Schools Superintendent Race Election Results: 3 Other Arizona Races Up in the Air Supervisor questions county ban on employee contributions
By posting comments, you agree to our
AZPM encourages comments, but comments that contain profanity, unrelated information, threats, libel, defamatory statements, obscenities, pornography or that violate the law are not allowed. Comments that promote commercial products or services are not allowed. Comments in violation of this policy will be removed. Continued posting of comments that violate this policy will result in the commenter being banned from the site.