As term comes to end, she says there are no regrets; Doug Ducey steps in come January. by Christopher Conover TWEET SHARE

She was sworn in as governor January 2009, following the resignation of then-Gov. Janet Napolitano. Brewer was the secretary of state at the time.

The Republican came to office during the Great Recession, inheriting one of the worst budget deficits in Arizona's history.

Nearly six years later, Brewer leaves office with much of the nation, though not Arizona, out of the recession. The state is also facing a budget shortfall in the coming fiscal year of $1 billion. Solving the budget problem will be left to Gov.-elect Doug Ducey. 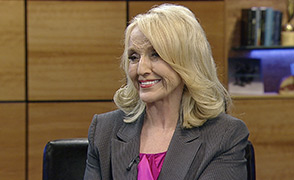 Brewer said this will be a challenge.

One problem Brewer tried to resolve was education. This was the reason she first ran for office more than three decades ago. It is an issue that is wrapped in many parts of governing, she said.

“If you are going to drive that economic force into Arizona, the first thing that CEO will ask you is about your higher education and your skilled workforce...we need so badly out there," she said.

Child welfare was another key issue for Brewer.

Her final legislative session was dominated by the revamp of Child Protective Services. She said it was an on-going issue, but came to a head when it was reported that thousands of cases of potential child abuse and neglect were set aside and never investigated.

“We went in there and went bang, I was not gonna put up with it," she said. "I was distraught, I was devastated that this happened."

She said what the state Legislature accomplished is a good thing.

“In the end, there is a silver lining because we were able to go back in and get 100 percent support out of the Legislature to get it resolved," Brewer said.

But much of her legacy will be tied to immigration and the national attention she received for signing SB 1070 into law, as well as wagging her finger at President Barack Obama in Phoenix.

The governor said all the political drama aside, immigration comes down to her belief in the rule of law.

“All we were trying to do was enforce the law the way it was written, but that was not accepted very well by the federal government," she said.

In the end, Brewer said looking back at her time in office, she would not change a thing.

“We were just able to accomplish so much during my six years in office during the worst times Arizona has ever faced in regards to many, many issues," she said. "The reforms we were able to enact, the budget...issues we were able to solve. I have no regrets.”

AZ WEEK: Governor Brewer Reflects on Time in Office Republican Ducey is Next Arizona Governor Tucson mayor and City Council approve city budget, leaving police funding nearly flat
By posting comments, you agree to our
AZPM encourages comments, but comments that contain profanity, unrelated information, threats, libel, defamatory statements, obscenities, pornography or that violate the law are not allowed. Comments that promote commercial products or services are not allowed. Comments in violation of this policy will be removed. Continued posting of comments that violate this policy will result in the commenter being banned from the site.