Republican claimed victory over Democrat Barber with a lead of 161 votes; Barber says margin needs to be verified. by Andrea Kelly TWEET SHARE

"I am not going to concede until the election is certified and the recount is conducted," Barber said.

"If I should win, my focus is going to be to make sure that we heal and we unite and we put this behind us," McSally said. "My intent all along was to represent everyone in this community." 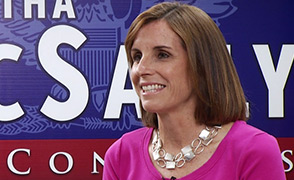 In an interview this week, before the final votes were counted to determine her pre-recount victory, she said she realizes that, if the recount confirms her win, she will represent a district in which half of the residents did not vote for her.

"My intent is to reach out to those, especially, that didn't vote for me to make sure that they meet me as a person, understand that I'm there to represent them, too," she said.

District 2 is one of three competitive districts in Arizona, and among a handful of districts in the country that were too-close-to-call for days after the election. The race was close enough to require a recount, according to state law.

“Democracy in our current system is a rare phenomena, this is one instance where we have it," said Michael O'Neil, of O'Neil Associates, a political polling agency in Tempe. "In this district...your vote counts.”

For the candidates, that means more waiting.

"This is the process we need to go through to make sure that votes count," McSally said.

It is unlikely, however, that the recount will change the result, O'Neil said.

“It is very rare for machine-read ballots to show a different result when you go through the recount," he said.

Both candidates said this week every lawful vote should count, and it remains unclear whether either will sue to get some ballots included, or discounted from the vote count.

This week, McSally went to Washington for orientation, while Barber was there because Congress was in session.

When the transition begins between this session and the next, McSally said she wants to ensure the constituent cases Barber's staff is working on at the end of the year get transferred to her staff when she takes office.

McSally, Barber Recount Ends; Results Wednesday Barber-McSally: Arizona's First Congressional Recount Pima County readies COVID-19 vaccine expansion
By posting comments, you agree to our
AZPM encourages comments, but comments that contain profanity, unrelated information, threats, libel, defamatory statements, obscenities, pornography or that violate the law are not allowed. Comments that promote commercial products or services are not allowed. Comments in violation of this policy will be removed. Continued posting of comments that violate this policy will result in the commenter being banned from the site.