The legal troubles surrounding Arizona Attorney General Tom Horne's campaign are about to be over. 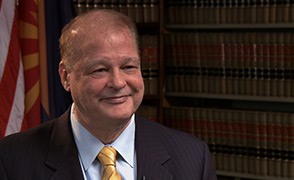 The Citizens Clean Elections Commission is poised to approve a settlement with Horne. The deal requires the attorney general to pay a $10,000 fine for using state resources for his failed re-election bid. That fine must be paid by Nov. 28 and the money cannot come from campaign accounts.

Horne told The Associated Press that he cannot comment until the commission formally accepts the agreement at its Thursday meeting.

If all parties sign off the deal, it is not appealable.

Horne lost a chance for a second term to Republican Attorney General-elect Mark Brnovich in the August primary.

Attack-Ad Funders from 2010 Attorney General's Race Named Attorney General Sues to Oust Corporation Commission Chair Clean Elections Director: Enough Evidence Horne Broke Elections Laws
By posting comments, you agree to our
AZPM encourages comments, but comments that contain profanity, unrelated information, threats, libel, defamatory statements, obscenities, pornography or that violate the law are not allowed. Comments that promote commercial products or services are not allowed. Comments in violation of this policy will be removed. Continued posting of comments that violate this policy will result in the commenter being banned from the site.