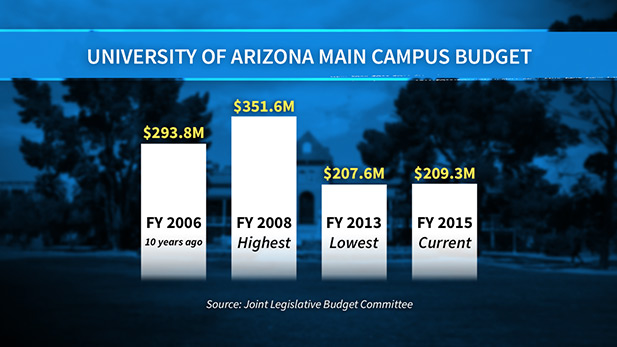 The University of Arizona's shrinking budget in the past decade has forced the administration to make difficult decisions to keep priority programs funded, the institution's president said.

State funding made up 28 percent of the university's budget in 2006, and 10 budget years later, it accounts for about half as much of the total university budget. Proportionally, student tuition, fund raising and grants now make up a larger portion of the budget than they did a decade ago.

Because of those changes, the university is forced to fund the programs that speak to its highest priorities, said Ann Weaver Hart, University of Arizona's president.

"We received very little in additional funds from the state legislature" for this fiscal year, she said. The university's request for additional funding for cooperative extension programs was funded, but other things were not, which forced funding to come from elsewhere, she said.

"We are working very, very hard to keep the 'Never Settle' goals in mind," she said, referring to her strategic plan for the university.

Among the goals, she said, are to increase diversity among the student and faculty and grow the student population without expanding too quickly.

Hart was criticized during the summer for some of her funding decisions, which she said is unavoidable.

"For every 'yes' there's a 'no' that goes with it. None of those decisions are good versus evil, they are which is the best optimization of the potential of the University of Arizona," Hart said.

The criticism stemmed from a communication issue, she said.

"One of the issues that was important for me to come to understand is, what is difference between perception and a lack of knowledge about what we've actually accomplish and been doing over the summer," she said.

She has been focused on "helping people to understand the incredible advancements we make and the difficult decisions," she said. "I didn't come here thinking this was going to be an easy job."

Hart said the growth in grants is necessary, in part, because stimulus funding that paid for programs a few years ago has expired. When funding is slim, so are the options, she said.

"One of the most difficult decisions we make is which of our key signature programs we are going to invest in going forward," she said.

And the problems are not ending soon. Budget planning documents from the Joint Legislative Budget Committee show less than 1 percent growth in the entire three-university system budget in the next two years. The state also owes more than $300 million to the K-12 education system.

"The K-12 problem is clearly central to the discussion this year, and the pace of the economic recovery will have an impact on state revenues. So we have to make sure that we are strong advocates for the contribution of higher education and the University of Arizona within our state higher education system to the future well-being of this state," she said.

Rising Tensions Between UA, Its Neighbors Voiced at Public Forum
By posting comments, you agree to our
AZPM encourages comments, but comments that contain profanity, unrelated information, threats, libel, defamatory statements, obscenities, pornography or that violate the law are not allowed. Comments that promote commercial products or services are not allowed. Comments in violation of this policy will be removed. Continued posting of comments that violate this policy will result in the commenter being banned from the site.