Many opposers of President Barack Obama's executive actions on immigration argue the move is illegal.

It is also a setback for the long-term agenda of immigration reform, argued Clint Bolick, who is with the Goldwater Institute in Phoenix.

He said the U.S. Constitution doesn't point to the president having any power over immigration policy changes. 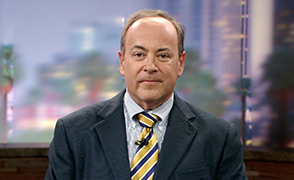 Clint Bolick of the Goldwater Institute in Phoenix.
AZPM Staff

"He is bound by the laws that Congress has passed," Bolick said. "And I think that this action exceeds and changes the laws under which he is purporting to act...this goes far beyond his lawful powers, unfortunately."

On Nov. 20, Obama took action to expand deportation deferrals for as many as 5 million people in the country illegally, but who have children who are U.S. citizens or legal residents and have no criminal record.

The move is also not the right way to go about reforming the system, because there is uncertainty of what will happen when a new president steps into office, Bolick said.

"The only way these people can feel safe and secure and become a permanent part of the American family is through congressional action," he said. "Unfortunately, the president circumvented that."

"To the extent that it brings people out of the shadows, allows them to work...that is a wonderful thing," Bolick added. "But...it really does leave people in a state of limbo."

At least 17 states, led by Texas, have joined the lawsuit seeking to have Obama's actions on immigration stopped.

METRO WEEK: Grijalva Supports Obama Immigration Actions; Expands Leadership Role Arizona Signs onto Challenge of Obama's Immigration Policy Poll: Most Latinos Support Obama's Immigration Actions
By posting comments, you agree to our
AZPM encourages comments, but comments that contain profanity, unrelated information, threats, libel, defamatory statements, obscenities, pornography or that violate the law are not allowed. Comments that promote commercial products or services are not allowed. Comments in violation of this policy will be removed. Continued posting of comments that violate this policy will result in the commenter being banned from the site.