Every 3 years, the agency is evaluated by a national group that oversees law enforcement. by Amanda Le Claire TWEET SHARE

The University of Arizona Police Department is asking for public comment about its policies and enforcement practices. 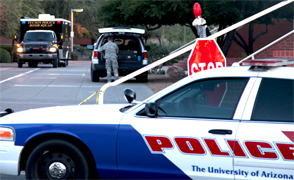 Every three years, UAPD is evaluated by a national agency that oversees law enforcement.

Officials say the inspection ensures the department’s policies are in line with contemporary law enforcement practices.

Meeting the standards of the Commission on Accreditation for Law Enforcement Agencies is a voluntary process for police agencies. According to UA Police Sgt. Filbert Barrera, it’s also considered an achievement.

“It’s something that we do voluntarily, it’s something we take a lot of pride in. It’s a very arduous process and there’s a lot of stuff that goes into as far as documentation of everything we do," he said.

Barrera said the department was the fifth college police agency in the nation to be accredited when it passed inspection by CALEA in 1993.

University employees, students, and community members can share comments about the police department at a meeting the night of Monday, Dec. 8 at the Swede Johnson Building on the UA campus.

In Wake of Dallas Police Killings - Tucson Police Working with the Community UA Safety App Puts Calling Police at Students' Fingertips UAPD Continues to Investigate 2013 Gunman Reports
By posting comments, you agree to our
AZPM encourages comments, but comments that contain profanity, unrelated information, threats, libel, defamatory statements, obscenities, pornography or that violate the law are not allowed. Comments that promote commercial products or services are not allowed. Comments in violation of this policy will be removed. Continued posting of comments that violate this policy will result in the commenter being banned from the site.