Tucson is installing new parking meters that allow drivers to pay with a credit or debit card to try to encourage people to use the spots for short-term parking only.

The new meters are going in downtown and near the University of Arizona, where coin-operated meters are installed now. They'll be going up in those locations before the end of the year.

Starting in January, it will cost $1 an hour to park along North Fourth Avenue, said Donovan Durband, the Park Tucson administrator.

“We’re making an effort to be more customer-service friendly, we’re trying to get with the times,” he said, by installing meters that accept credit and debit cards, smart cards and coins like the old meters.

The city is working on a smart phone application that will allow people to pay for transit, the bus system or streetcar, and meters, all by loading the app with money.

The streetcar prompted some of the changes.

“We’re really looking at modernizing our parking program along with the streetcar and all the improvements we’re making in terms of the transportation and other infrastructure in the downtown area,” he said. 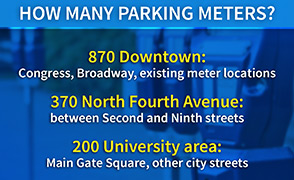 The paid parking on Fourth Avenue will be new, Durband said, and it will create a revenue stream before building a parking garage for Fourth Avenue patrons.

“You need to have the public in the habit of paying to park,” he said. The meter revenue needs to come in now to help pay for a future garage. "We can’t charge enough on a monthly basis or a daily basis to where we could just pay for a garage…without having an internal subsidy.”

At night, parking is free at meters downtown, but can be $5 in a garage for an evening.

Durband said some people think parking is cheap in Tucson, while others are used to free parking when they're not downtown.

"You need to get people over that psychological barrier to understand that parking isn’t free," he said.

The rate to park at meters is rising to $1 an hour.

“You want to have the street parking be equal to or greater than your garage parking because you want to incentivize people who are parking for a longer period of time to use garages or parking lots,” he said. That allows the city to charge a premium for street parking right outside businesses, he said.

The new electronic meters that take credit and debit cards, coins or cell phone payments via an application, cost $470 each to install, Durband said. They run on solar powered batteries. "The costs are pretty low as far as, once they’re purchased, they’re pretty low maintenance.”

The city will pay the credit card fees, not the driver using a card to pay for parking, he said.

“There is a psychology to the payment form that I think will allow us to see some revenue increases that will offset the costs of the credit card fees that we will incur,” Durband said.

METRO WEEK: $200M Tucson Streetcar Opens For Service State keeping unemployment trust fund solvent Arizona unemployment goes in opposite directions
By posting comments, you agree to our
AZPM encourages comments, but comments that contain profanity, unrelated information, threats, libel, defamatory statements, obscenities, pornography or that violate the law are not allowed. Comments that promote commercial products or services are not allowed. Comments in violation of this policy will be removed. Continued posting of comments that violate this policy will result in the commenter being banned from the site.