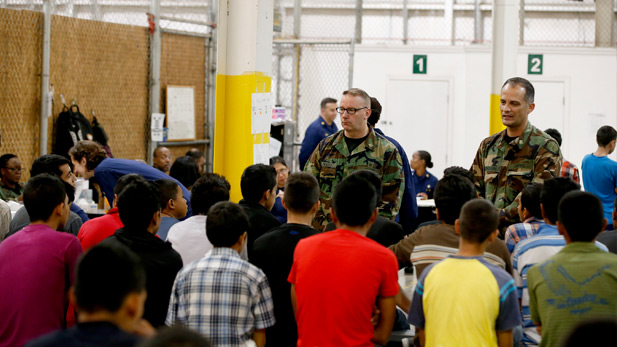 The Department of Homeland Security deported 414,000 undocumented immigrants in the last federal fiscal year. That’s down slightly from 2013, a record year.

The number of apprehensions of people alleged to be in the country illegally rose to 486,000, DHS said in its annual report. It said 96 percent of those apprehensions were of people from Mexico, Guatemala, El Salvador and Honduras and included an estimated 60,000 unaccompanied minors from the Central American countries.

The big change this year was that - for the first time - more people were caught at the Southwestern border from Central America than from Mexico, the report said.

The Tucson Sector of the Border Patrol, for more than a decade the place where the highest number of apprehensions occurred, ranked No. 2 for the second straight year, behind the Rio Grande Valley in Texas. That's where the biggest numbers in the surge of children from Central America came across the border last spring and summer.

Obama Deportation Deferral May Affect 135,000 in Arizona CBP head defends accelerated border expulsions, blames migrants for increasing COVID-19 risk Tucson mayor and City Council approve city budget, leaving police funding nearly flat
By posting comments, you agree to our
AZPM encourages comments, but comments that contain profanity, unrelated information, threats, libel, defamatory statements, obscenities, pornography or that violate the law are not allowed. Comments that promote commercial products or services are not allowed. Comments in violation of this policy will be removed. Continued posting of comments that violate this policy will result in the commenter being banned from the site.