'The Interview' to Open at Tucson's The Loft Christmas Day 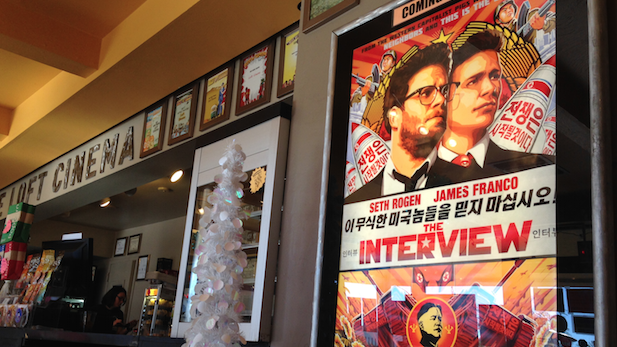 Poster for "The Interview" in The Loft Cinema lobby.
Vanessa Barchfield, AZPM

The Loft Cinema in Tucson will be among a select group of independent theaters around the country that will screen the film The Interview starting Christmas Day.

The film was scheduled to open in Cinemark theaters in Tucson, before an international incident last week led the national chain – and distributor Sony – to cancel its release.

The movie is a comedy about a fictional attempt to assassinate North Korean dictator Kim Jong-un. Sony's internal business information was hacked by outsiders, something that U.S. officials blamed on the North Korean government, which denied it.

At the same time, threats were made against theater chains scheduled to show the movie. Sony withdrew its release, but now has begun releasing it to smaller, independent houses such as The Loft.

Jeff Yanc, program director at The Loft, said his theater contacted Sony immediately to express interest in showing the film, and found out Tuesday morning it would get that chance. Yanc called the decision to show the film a political one.

Yanc said he doesn’t think the film will put the theater or visitors at risk. There will be security guards on hand - but then again, there always are.

“We’re not really anticipating any larger issues than any kind of normal screening, except there’ll be larger crowds I would think," he said.

Yanc recommended people who want to see the film Christmas day get tickets in advance. Regardless of whether they're coming for political reasons or just for entertainment, The Loft expects a full house.

Loft Cinema's Renovated Flagship Theater Reopens Thursday The vision of Sama Alshaibi. Painting on Shadows - The music of To-Ree-Nee Wolf.
By posting comments, you agree to our
AZPM encourages comments, but comments that contain profanity, unrelated information, threats, libel, defamatory statements, obscenities, pornography or that violate the law are not allowed. Comments that promote commercial products or services are not allowed. Comments in violation of this policy will be removed. Continued posting of comments that violate this policy will result in the commenter being banned from the site.