'I will submit balanced budgets to the House and Senate,' he says in inaugural speech before big Capitol crowd. by Christopher Conover TWEET SHARE 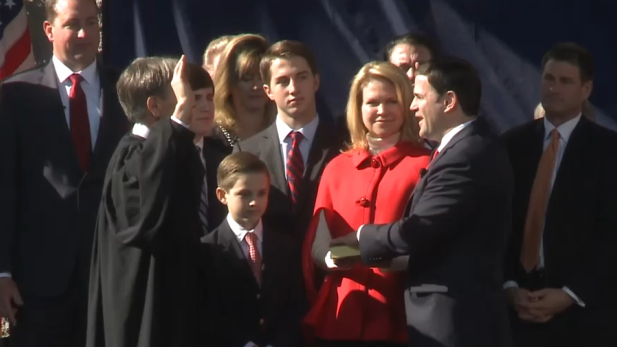 Doug Ducey was sworn in shortly after noon Monday as Arizona's 23rd governor.

Ducey began his inaugural speech by lauding his predecessor, Jan Brewer, and the state's other surviving former governors, starting with Democrat Raúl Castro, who was not at the ceremony.

He then set his philosophy for governing.

“Opportunity for all: this was the defining commitment of my campaign," Ducey said. "And you won’t hear me changing the subject these next four years. Whether it is spending, or the tax code, or changes in our public schools and legal system – or any other policy question – my first priority is simple: put more opportunities and greater freedom within reach of all our citizens.

Ducey repeated his pledge to be "governor for all the people. ... everyone (must be) given a fair chance and even a second chance, no one forgotten, no one written off."

He addressed the state's fiscal issues up front.

"I will submit balanced budgets to the House and Senate," he said. "Fair warning: The budget will not meet with general approval among special interests – and if they did approve, I would start to worry."

He also pledged to find more savings in state government and repeated his promise not to raise taxes.

"In the plainest terms, it’s not that the people are taxed too little; it’s that their government is spending unwisely," Ducey said. "Raise taxes and you haven’t solved anything. All that does is excuse the ineffective spending and invite more of it.”

He also called for educational opportunity for all Arizona children, saying the public school system has some great schools and more reform can expand on that.

“No matter how much we grow in prosperity, the right to a real education will not depend on family wealth or sheer luck," he said. "It will be a first principle of my agenda that schools and choices available to affluent parents must be open to all parents, whatever their means, wherever they live, period.”

Ducey comes into office facing a deficit of as much as $1 billion for the fiscal year that begins in July and a court decision coming soon on how much the state owes for public education funding.

Ducey will have to factor the slow economic recovery against those issues as he writes his state of the state address for next week. He also must put together a state budget to be delivered to the Legislature by Jan. 16. 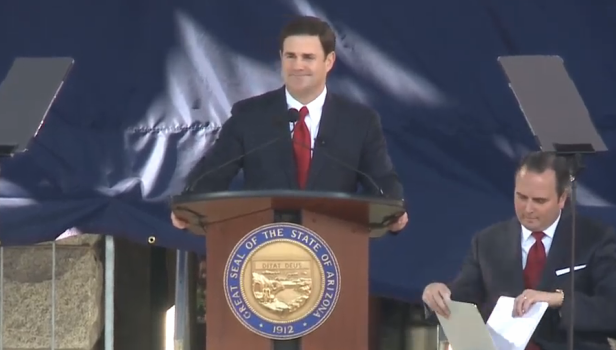 Ducey Freezes State Hiring, Rejects Tax Increases Governor-Elect Ducey Prepares to Step into Office Arizona electoral votes accepted after storming of the Capitol
By posting comments, you agree to our
AZPM encourages comments, but comments that contain profanity, unrelated information, threats, libel, defamatory statements, obscenities, pornography or that violate the law are not allowed. Comments that promote commercial products or services are not allowed. Comments in violation of this policy will be removed. Continued posting of comments that violate this policy will result in the commenter being banned from the site.