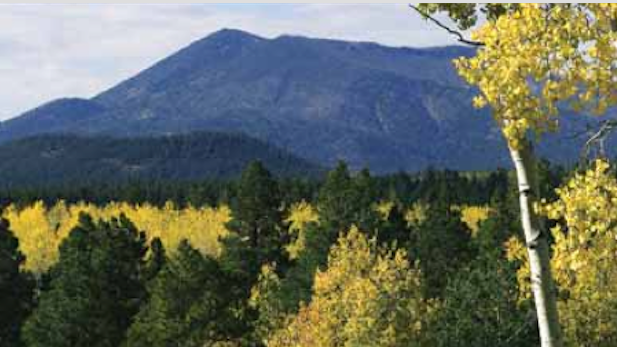 Ron Hubert always dreamed of a house with a view. Specifically, the view of the San Francisco Peaks rising majestically north of Flagstaff.

“They get the early sunrise in the morning so they’re colored when the rest of the sky is still dark," Hubert said. "They’re frequently gold or purples, a never-ending feast of color and shapes."

When it came to designing his home on the outskirts of Baderville, a neighborhood at the base of the peaks in Flagstaff, Hubert wanted a sustainable design. So he hired contractor Ed Dunn, who specializes in passive solar.

But Hubert wouldn't go for Dunn's design, with south-facing windows to capture winter sunlight and warm the house. He preferred the mountain view, to the north.

That's the dilemma for many in Flagstaff. While Southern Arizona's triple-digit temperatures are great for generating electricity from sunlight, that doesn't work as well in cooler Flagstaff. But there, a south-facing design can produce needed winter warmth, without solar panels.

"Passive solar works," Dunn said. "It’s drop-dead simple to me it was the only way to build a house."

He said if a house is designed with its long side facing south, windows will collect sunlight all winter long. In the summer, when the sun tracks higher in the sky, overhanging eaves keep the house cool and shady.

The problem, Dunn said, is the San Francisco Peaks rise on the north side. When Hubert opted for the view to the north over the southern exposure, it was not the first time Dunn faced the dilemma.

"I have actually suggested to clients that we move the mountain to the other side of town," he said with a grin.

Of course it’s easier and cheaper to give up the view. That’s what Eric Brown did.

"When I really want to enjoy the peaks, and the beauty of the peaks, I simply step outside," Brown said.

He is one of few Baderville homeowners who was willing to sacrifice large mountain-view windows for passive-solar sustainability. Even his chicken coop is heated by the sun.

"Chickens won’t produce eggs if they are cold, so I figured, well, we’ll try to make them nice and warm by giving them the same passive solar elements that we enjoy in our house," he said.

One of those elements is a long row of south-facing windows that capture sunlight so effectively, Brown’s family uses no propane for heating, even when the temperature drops below zero, which it does in winter. He said the savings and energy efficiency are well worth the trade-off.

"I almost don’t want to talk about how much money I don’t spend on propane costs and firewood costs because our house is heated naturally," Brown said.

Flagstaff contractor Jeff Knorr said he believes nearly all Baderville residents could save a lot of money if they went with passive solar design. But, he said, he understands a homeowner’s desire to enjoy one of the most spectacular views in town.

"What we see is the trend of people moving toward being willing to do more things to make their home more energy efficient," Knorr said. "But when the rubber hits the road, I think the view of the mountain wins the battle.”

Arizona Science Desk is a collaboration of public broadcasting entities in the state, including Arizona Public Media.

Study: Wildfire May Double Erosion in Western Watersheds Solar on the Rise: Electricity Output Equal to Hoover Dam Solar on the Rise: Will Arizona be the Persian Gulf of Solar?
By posting comments, you agree to our
AZPM encourages comments, but comments that contain profanity, unrelated information, threats, libel, defamatory statements, obscenities, pornography or that violate the law are not allowed. Comments that promote commercial products or services are not allowed. Comments in violation of this policy will be removed. Continued posting of comments that violate this policy will result in the commenter being banned from the site.