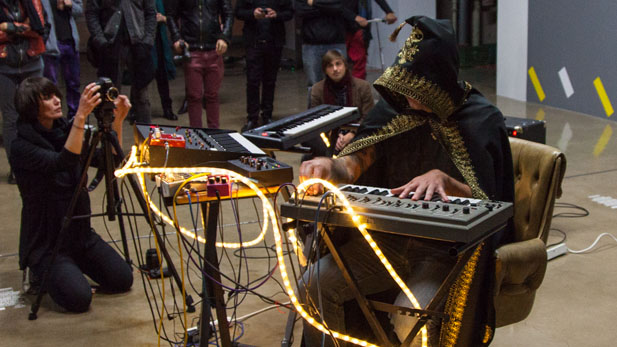 On Tuesday, November 17th, The Museum of Contemporary Art in downtown Tucson held a unique exhibition where the art filled every space in the building - and even spilled outside.

To some, it may have sounded like noise, but to others it was an engaging live experience for more than just their ears. Andrew Brown was there...

Listen to the entire performances by Eric Schlappi, Ryan Chavira, and Young Trucker from of Sound + Noise.

Tucson Photographer, Daughter Tell Stories of Syrian Refugees Wildfire Season Rages on at University Museum of Art All Souls: Tucson's Annual Celebration of Life and Death
By posting comments, you agree to our
AZPM encourages comments, but comments that contain profanity, unrelated information, threats, libel, defamatory statements, obscenities, pornography or that violate the law are not allowed. Comments that promote commercial products or services are not allowed. Comments in violation of this policy will be removed. Continued posting of comments that violate this policy will result in the commenter being banned from the site.