White Christmas in Tucson is No More Than a Dream

For the 28th year in a row, no snow predicted for the holiday. by Sara Hammond TWEET SHARE 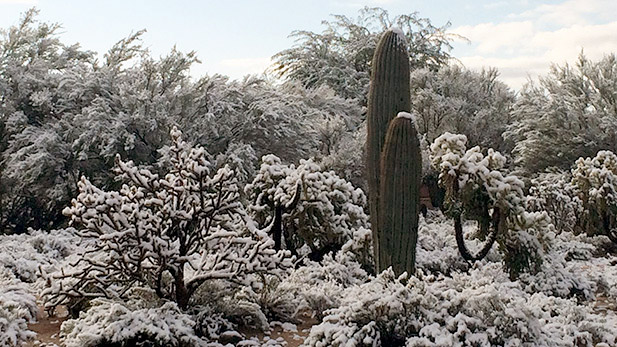 Southern Arizonans dreaming of a white Christmas will have to keep dreaming.

Weather forecasters say the western United States will see a potent storm Christmas week moving in from the Pacific Northwest bringing snow to the Sierra Nevada mountains of California and the higher elevations in Arizona, and rain throughout much of the rest of the region.

The storm is not part of the El Niño pattern, the forecasters said.

For the 28th year in a row, Tucson and desert environs will see what we see most days – beautiful desert landscapes with no snow cover. In fact, most of the United States will be without snow.

There is going to be “very little white Christmas east of the Mississippi, east of the Rockies,” said Stephen Baxter, a seasonal forecaster with the National Weather Service.

Snow tires won't be needed when going to grandma’s house.

Please Hold for Santa: Tucson Kids Get Calls From Old St. Nic Forecast: El Niño Winter Could Bring Snow on Cactus UA Research: Sierra Nevada Snowpack Lowest in 500 Years
By posting comments, you agree to our
AZPM encourages comments, but comments that contain profanity, unrelated information, threats, libel, defamatory statements, obscenities, pornography or that violate the law are not allowed. Comments that promote commercial products or services are not allowed. Comments in violation of this policy will be removed. Continued posting of comments that violate this policy will result in the commenter being banned from the site.