West Nile and St. Louis Encephalitis viruses found together in Arizona for first time ever. by Andrea Kelly TWEET SHARE 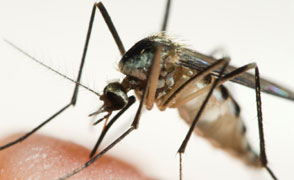 The discovery marks the first time the two diseases have been found together. Both are spread to humans by mosquitoes who have fed on infected birds.

In both cases, people infected may not know they have contracted the illnesses. When they do make their presence known, both appear as flu-like symptoms, but can cause serious deteriorating cognitive function, though this can be temporary.

"Both West Nile virus and St. Louis encephalitis virus are primarily spread by the bite of mosquitoes, and can cause symptoms ranging from fever, headache and body aches to encephalitis or meningitis," wrote Cara Christ, state health department director on her blog.

The co-outbreaks were between May and October, prime mosquito season.The health department says this discovery is another reason people should protect against mosquito bites year-round.

Mosquitoes can be a risk all year, although the mosquitoes themselves aren’t noticeably buzzing at barbecues every month of the year.

Mosquito Season Brings Worry of West Nile More Than Zika UA Re-Engineering Mosquitoes to Resist Disease Mosquitoes May Stay Until November
By posting comments, you agree to our
AZPM encourages comments, but comments that contain profanity, unrelated information, threats, libel, defamatory statements, obscenities, pornography or that violate the law are not allowed. Comments that promote commercial products or services are not allowed. Comments in violation of this policy will be removed. Continued posting of comments that violate this policy will result in the commenter being banned from the site.