The state will dedicate the only veterans' cemetery in the Tucson metro area Saturday at 10 a.m.

The Marana Veterans' Memorial Cemetery will be the third in the state. The others are in the Phoenix area and in Sierra Vista, far from Tucson residents.

That's why Paul Marsh, former Pima County supervisor, decided to start the effort to build one closer to his home. The cemetery was paid for with a $7.6 million federal grant, and sits on land donated by the Kai Family Foundation, a farming family in Marana.

It is tucked between I-10 and farm fields, and within sight of Pinal Air Park. It's near Marana Road and Interstate 10, and has the capacity for more than 100,000 in-ground burials and cremated remains.

It is unknown how long it will take to reach capacity, but the state expects about 650 interments a year, said Bonnie Dudelston, the cemetery administrator for the state.

Getting to dedication day took almost a decade, and started when Marsh attended a veteran’s funeral. He couldn’t figure out why it wasn’t at the veteran’s cemetery.

Turns out, there wasn’t one in the Tucson area. He was dismayed.

"We’re a veterans’ town. We have an air base here that’s very strong. We have a great population of veterans and they’re intermingled with the community to the point where sometimes you don’t know who a veteran is," Marsh said.

Marsh worked to get the land and the federal funding, plus an agreement that the State Veteran's Services Department would run the site once it was created.

“Tucson needed it, desperately," Ross said. "Sierra Vista is a great town, but there are only 35,000 people there. With the roughly million people in Pima County and add in another 300,000-400,000 in Pinal County, you’re looking at a goodly number.”

Marsh and Ross both said they plan to be laid to rest in the cemetery they helped create.

After it’s dedicated Saturday, the cemetery will be open from 7 a.m. to 5 p.m. daily. 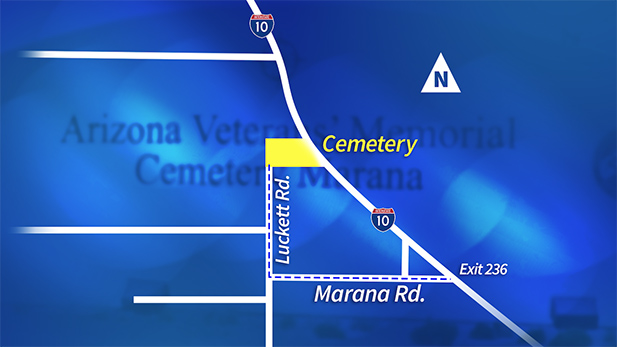 Veterans' Remains To Be Laid To Rest Saturday Immigrant Doctors Provide Care to State's Small Communities Arizona Behavioral Health Care Provider's Integrated Approach
By posting comments, you agree to our
AZPM encourages comments, but comments that contain profanity, unrelated information, threats, libel, defamatory statements, obscenities, pornography or that violate the law are not allowed. Comments that promote commercial products or services are not allowed. Comments in violation of this policy will be removed. Continued posting of comments that violate this policy will result in the commenter being banned from the site.