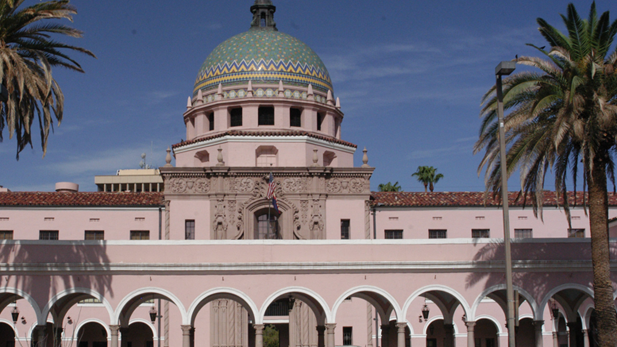 The Pima County Board of Supervisors approved a $1.23 billion county budget Tuesday, including a 10-cent decrease in the primary property tax rate.

The tax decrease will save the average homeowner a little more than $1 a month.

The budget includes raises for county employees of between 2 percent and 6 percent.

Democrats Richard Elias, Ramon Valadez and Sharon Bronson voted for the budget; Republicans Ray Carroll and Ally Miller voted against it. All supervisors except Carroll are up for re-election.

In a press release, the county said, "The tax cut is a fulfillment of the board’s promise during the FY 2016 budget adoption that if the county prevailed in a lawsuit against the state it would reduce the tax rate it set last year."

That occurred, when a Superior Court judge ruled the state Legislature and governor unconstitutionally increased Pima County's obligation to public schools by $16 million.

$1.24B Pima County Budget Proposed with No Tax Rate Increase County Budget Proposal Pushes Another Property Tax Increase Pima County Approves Tax Increase with New Budget
By posting comments, you agree to our
AZPM encourages comments, but comments that contain profanity, unrelated information, threats, libel, defamatory statements, obscenities, pornography or that violate the law are not allowed. Comments that promote commercial products or services are not allowed. Comments in violation of this policy will be removed. Continued posting of comments that violate this policy will result in the commenter being banned from the site.