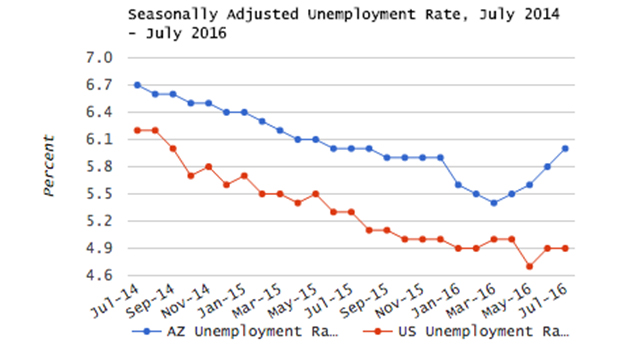 Arizona's jobless rate has been on the rise since March and now sits where it was in August of 2015.

The jobless rate hit 6 percent in July, according to a report from the Arizona Office of Economic Opportunity.

But one official said monthly increases have not been caused by Arizonans losing their jobs.

That means Arizonans are not losing their jobs. It shows the job market is not growing fast enough to create a job for everyone who wants to work in the state.

September Sees Back-to-School Boost for Arizona Employment Arizona Unemployment Drops, Halts Four-Month Trend Arizona Unemployment Up for Third Straight Month, to 5.8%
By posting comments, you agree to our
AZPM encourages comments, but comments that contain profanity, unrelated information, threats, libel, defamatory statements, obscenities, pornography or that violate the law are not allowed. Comments that promote commercial products or services are not allowed. Comments in violation of this policy will be removed. Continued posting of comments that violate this policy will result in the commenter being banned from the site.