Chris Black's Chamberlab I - an unusual joining of musical styles

Mark McLemore tells us about a music project called Chamberlab and introduces us to its originator, Chris Black, along with some of the musicians who got involved. by Mark McLemore Tweet

Mark McLemore tells us about a music project called Chamberlab and introduces us to its originator, Chris Black, along with some of the musicians who got involved.

This story originally aired on Arizona Spotlight on 5-7-2010. 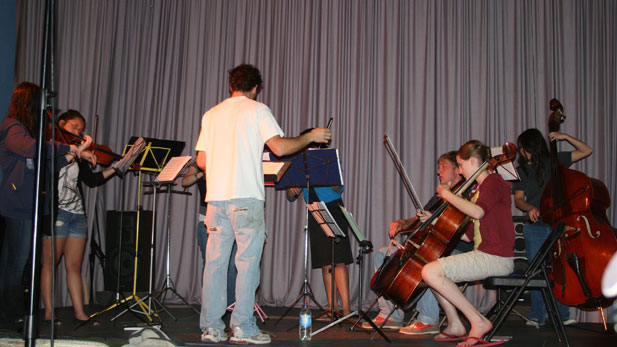 In this story about an unusual concert that took place in May, 2010, we find out what it takes to combine two string quartets (made up of Tucson-area music students) with compositions from some of our city's most well-known and successful musicians, including Howe Gelb, the Rosano Bros., Gabriel Sullivan and and Carlos Lopez. The result is called Chamberlab, the brain-child of Chris Black, a multi-talented Austin musical transplant who also tells why Tucson has become his home.

The Rogue Theatre presents "A White Heron". The Desert Blooms in a Bountiful Monsoon. "Confessions of a Vintage YA Book Reader".
By posting comments, you agree to our
AZPM encourages comments, but comments that contain profanity, unrelated information, threats, libel, defamatory statements, obscenities, pornography or that violate the law are not allowed. Comments that promote commercial products or services are not allowed. Comments in violation of this policy will be removed. Continued posting of comments that violate this policy will result in the commenter being banned from the site.