Arizona to Have Voice with Trump, Campaign Official Says

Immigration likely to be key issue in new presidency, and Arizona is a border state. by Lorraine Rivera TWEET SHARE 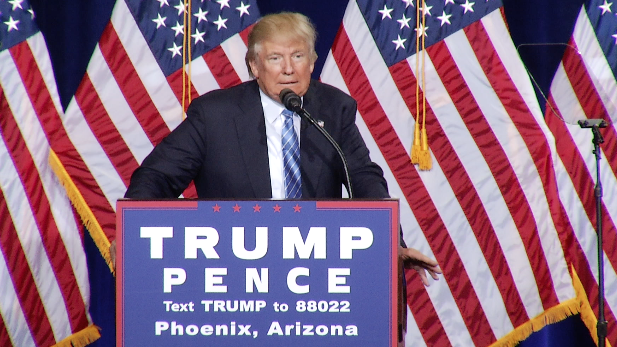 Arizona has a role to play in the administration of president-elect Donald Trump, one of his campaign officials has said.

“I do think Arizona will have a voice in the new Trump administration,” said Brian Seitchik, Trump’s campaign manager in the state.

Trump visited Arizona seven times in the campaign that led to his victory in the presidential race. Seitchik points out that Republican state Treasurer Jeff DeWit was the first elected official to support Trump, and eventually became the national chief operating officer of the campaign.

The issue of immigration, he added, was central to the Trump campaign and has high visibility and importance in Arizona.

“As a border state, immigration is a key issue here. It has been for a very long time. But it’s also an issue that other states are dealing with.”

Hear more of Arizona Public Media’s interview with Brian Seitchik and more on immigration issues in a Trump administration, Friday on Arizona Week, 8:30 p.m. on PBS 6.

Grijalva: Democrats Must Offer 'Effective Opposition' Gauging Future of Arizona-Mexico Trade under Trump Trump, McCain, McSally Keep Arizona a Red State
By posting comments, you agree to our
AZPM encourages comments, but comments that contain profanity, unrelated information, threats, libel, defamatory statements, obscenities, pornography or that violate the law are not allowed. Comments that promote commercial products or services are not allowed. Comments in violation of this policy will be removed. Continued posting of comments that violate this policy will result in the commenter being banned from the site.