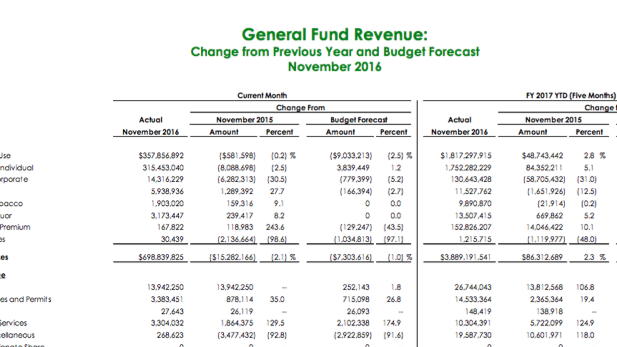 Arizona sales tax revenue had a second straight month of decline in November, coming in $9 million, or 2.5 percent, below the budgeted forecast, state analysts reported Tuesday.

The sales tax performance pulled the state's overall revenue picture for the month down by almost $3 million, or 0.4 percent, compared with the budgeted forecast. For the first five months of the fiscal year, state revenues were $65.5 million above predictions, or 1.8 percent.

Of the eight state tax categories, only individual income tax was higher than budgeted, up 1.2 percent or $3.9 million for the month, the report said.

Business Tax Cuts Reduce January State Revenue Intake State Revenues Surpass Budget, Driven By Income Tax UA to start vaccinations Jan. 22
By posting comments, you agree to our
AZPM encourages comments, but comments that contain profanity, unrelated information, threats, libel, defamatory statements, obscenities, pornography or that violate the law are not allowed. Comments that promote commercial products or services are not allowed. Comments in violation of this policy will be removed. Continued posting of comments that violate this policy will result in the commenter being banned from the site.