Writer Morgan Schuldt: a champion for the power of language

Tucson based writer, teacher, and publisher Morgan Schuldt shares how living with cystic fibrosis helps focus his poetry on both the light and the dark sides of the human condition. by Mark McLemore Tweet 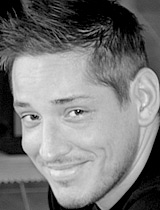 And he says it all started with a grilled turkey...

New Jersey-born Morgan Lucas Schuldt was on track for a career in law when a revelation came to him in front of a campfire where a turkey was sizzling away. He thought about the power and longevity of poems he had read by Walt Whitman and Robert Frost, and Morgan made a decision right then and there that he was going to follow his muse, wherever it would lead him.

Before finishing graduate school here in Tucson, Morgan was the co-founder of a prose poetry journal called CUE. CUE has since moved online like many other literary journals, due to the ever-rising production costs of staying in print. But going against the grain, Morgan simultaneously began his own publishing business CUE Editions to produce limited-edition chapbooks for writers who's work he admires. 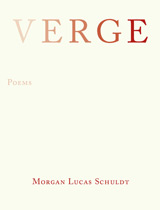 Morgan Schuldt's debut collection of poems was published in 2007

Morgan Schuldt is the author of a book of poems called Verge , which was published by Free Verse Editions in 2007, and two chapbooks: Otherhow (Kitchen Press, 2007), and L=u=N=G=U=A=G=E (Scantily Clad Press, 2009).

You can read L=u=N=G=U=A=G=E online with the author's permission, or visit his blog A Peek of Reach.

Morgan Schuldt reads from his collection Proem, with some backing music provided by Calexico.

(Thanks to Annie Guthrie at the University of Arizona Poetry Center for making this interview possible.)

How A.J. Croce connected with his father through the music they loved. Adia Barnes on Teamwork and Motherhood. The Dave Stryker Quartet kicks off the 2022 Tucson Jazz Festival.
By posting comments, you agree to our
AZPM encourages comments, but comments that contain profanity, unrelated information, threats, libel, defamatory statements, obscenities, pornography or that violate the law are not allowed. Comments that promote commercial products or services are not allowed. Comments in violation of this policy will be removed. Continued posting of comments that violate this policy will result in the commenter being banned from the site.