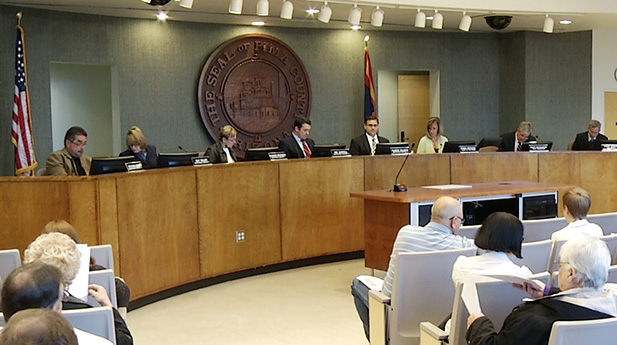 Pima County property owners will pay a higher tax rate under the $1.26 billion budget the Board of Supervisors tentatively adopted Tuesday.

The tax rate will rise 14 cents, meaning $18.47 a year more for the median-assessed house, county officials calculated. That increase will help raise nearly $20 million to be spent on street and road maintenance in the county and its municipalities.

County Administrator Chuck Huckelberry proposed the allocation of 25 cents of the property tax rate to street and road maintenance for five years, and said his projections show it can be offset by cuts elsewhere in all but the first year. That is why the rate is up 14 cents.

Tuesday's tentative approval of the budget means it cannot be increased before the final vote on it, scheduled for June 20.

Property Tax Bills On Their Way, With An Increase Pima Supervisors Approve Budget and Advisory Committee $100M Road Repair Plan Floated for Pima County
By posting comments, you agree to our
AZPM encourages comments, but comments that contain profanity, unrelated information, threats, libel, defamatory statements, obscenities, pornography or that violate the law are not allowed. Comments that promote commercial products or services are not allowed. Comments in violation of this policy will be removed. Continued posting of comments that violate this policy will result in the commenter being banned from the site.