Guitarist Domingo DeGrazia & violinist Beth Daunis create music that is distinctly Southwestern even as they embrace influences from around the world. by Robert Rappaport TWEET SHARE

Guitarist Domingo DeGrazia & violinist Beth Daunis create music that is distinctly Southwestern, even as they embrace influences from around the world. 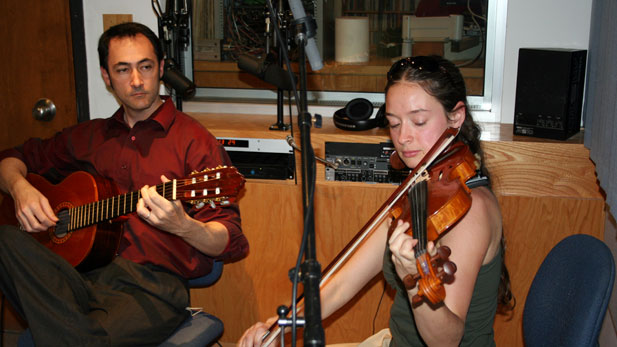 As the youngest son of the acclaimed artist Ted DeGrazia, Domino DeGrazia grew up being encouraged to explore his creative gifts. Beth Daunis found herself drawn to music, and the violin, from a very early age. As their conversation with Luis Carrion reveals, both come to the Southwestern desert from different places, but both connect with it in a vital way that is clearly expressed through their music.

Domingo and Beth visited the KUAZ Studios in March, 2010 to record a few of the tunes that are also featured on their new CD release, The Bluest Sky.

Spotlight Session: John Coinman "Secondhand: Travels in the New Global Garage Sale" What "The Decameron", a Medieval Italian masterpiece, can tell us about life during a pandemic.
By posting comments, you agree to our
AZPM encourages comments, but comments that contain profanity, unrelated information, threats, libel, defamatory statements, obscenities, pornography or that violate the law are not allowed. Comments that promote commercial products or services are not allowed. Comments in violation of this policy will be removed. Continued posting of comments that violate this policy will result in the commenter being banned from the site.