One of few structures from the era still in existance, the building at Fort Huachuca was designated as the black officers club. by Christopher Conover TWEET SHARE 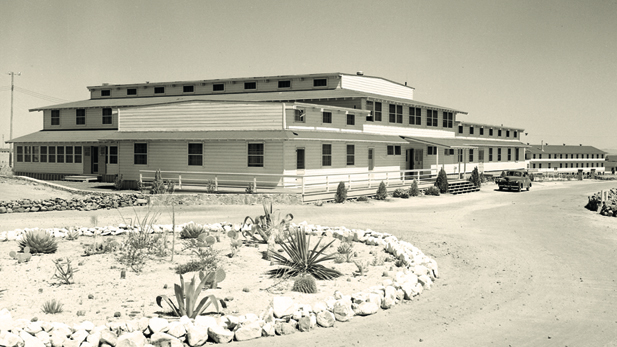 The National Park Service announced Monday a $500,000 grant for the restoration of the Mountain View Officers Club at Fort Huachuca.

The World War II-era building was constructed on the Sierra Vista Army post during a construction boom.

The post was the main training ground for African-American soldiers during the war. The building was designated as the black officers club.

It is one of the few buildings from that era still in existence.

The grant will allow the renovation of the exterior of the structure.

"It will be a full restoration of the outside of the building to its 1942 appearance. And that will involve removing some later and inappropriate additions, restoring the siding, restoring the windows," said Chris Morris with the National Trust for Historic Preservation.

The trust and the Southwest Association of Buffalo Soldiers are trying to raise additional, private dollars to continue the restoration project.

Group Wants Route 66 on List of National Historic Trails Episode 166: Nurturing Mt. Graham's Red Squirrel Population after the Frye Fire Mountain View Officers Club Gets Help For Renovations
By posting comments, you agree to our
AZPM encourages comments, but comments that contain profanity, unrelated information, threats, libel, defamatory statements, obscenities, pornography or that violate the law are not allowed. Comments that promote commercial products or services are not allowed. Comments in violation of this policy will be removed. Continued posting of comments that violate this policy will result in the commenter being banned from the site.