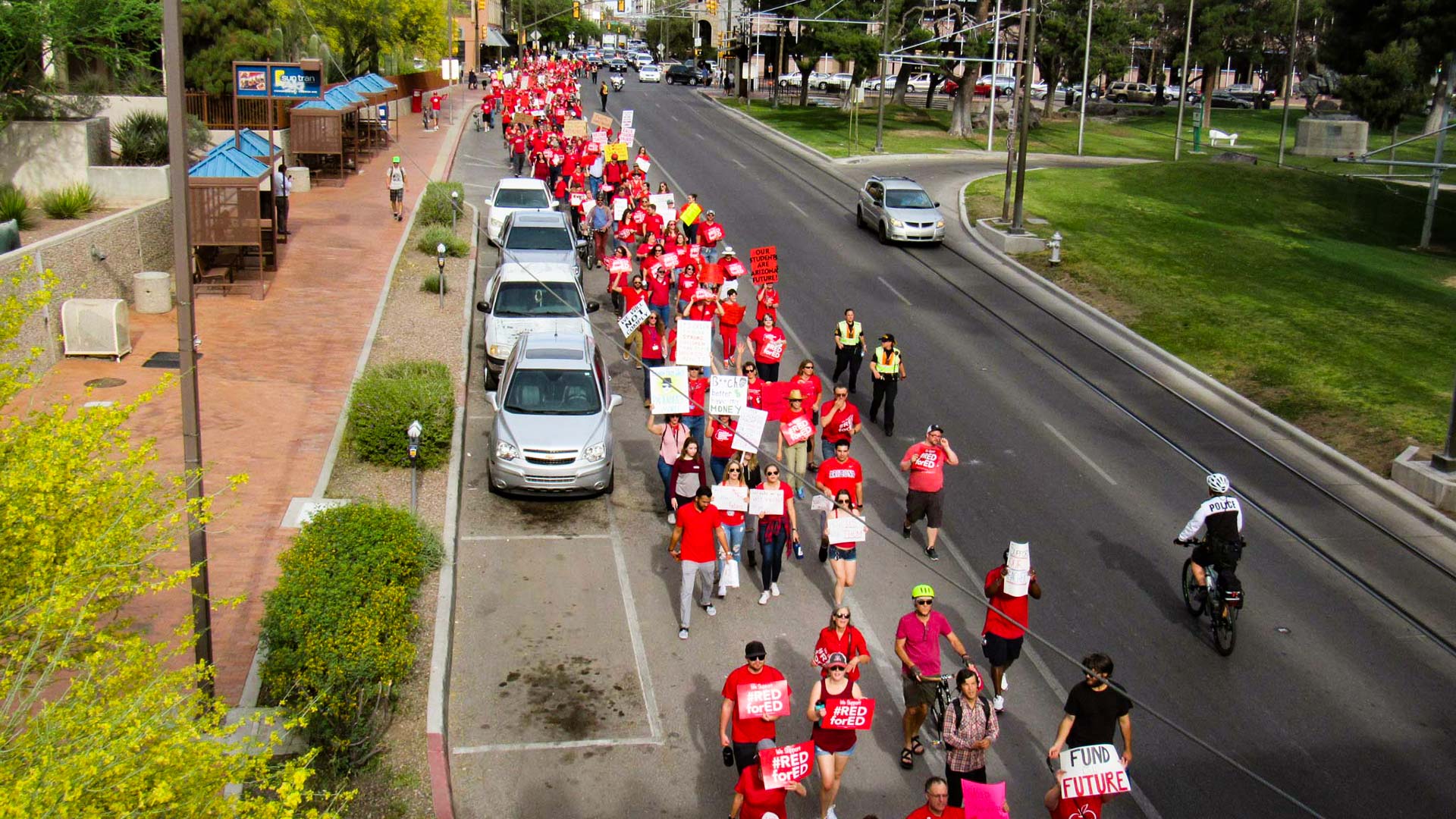 The findings of the new poll from The Associated Press-NORC Center for Public Affairs Research come amid recent teacher strikes and other protests over low pay, tough classroom conditions and the amount of money allocated to public schools in several Republican-led states.

Tens of thousands of Arizona teachers voted last week to strike after rejecting an offer of a 20 percent raise, because it didn't include a vow from state lawmakers not to further cut taxes before providing more money for the state's schools.

"To educate children and barely get a living is obnoxious," said Elaine Penman, a company manager in Tucson, Arizona, who added she and others went outside to cheer on protesting teachers who were marching by.

She's among the 50 percent of Americas who say they'd pay a higher tax bill if it meant more money for teachers.

"I'm a parent and I benefit directly from what teachers do," said Penman, who has two children in traditional public schools and one in a charter school.

In 2016-2017, the average salary for a public school teacher was $58,950, down slightly from the previous year, according to the National Center for Education Statistics.

Americans in states with the lowest average teacher salaries — less than $50,000 a year — were slightly more likely to think teachers were paid too little and that the national average should be an important factor in determining salaries.

The AP-NORC poll found that parents and those without children are about equally likely to think teachers are paid too little. It's a sentiment that crosses party lines, too. Nearly nine in 10 Democrats, 78 percent of independents and 66 percent of Republicans think teacher salaries are too low.

Slightly more than half of Americans — 52 percent — also approve of teachers leaving the classroom to strike in their search for higher pay, while 25 percent disapprove. Among those who say they've heard about the recent teacher protests, 80 percent say they approve of such tactics.

The recent run of teacher protests began in March in West Virginia, where teachers won a raise after going on strike. The strategy soon spread to Oklahoma, Kentucky, Colorado and Arizona, where educators joined together online and have held increasingly frequent protests during the past six weeks.

Americans believe state and local governments share responsibility with teachers and their unions for the disruptions caused by the strikes. Vernita Grimes, 68, of the District of Columbia, said teachers aren't making enough money for the work they do and she supports them having the right to strike, "even though I know kids are losing valuable teaching time."

But Caitlyn Scott, 27, of Kent, Ohio, said teachers are earning "about what they should," and she opposes strikes by teachers.

"I think they kind of committed to being there for the entire school year," she said.

Half of Americans would be willing to shoulder the cost of paying teachers more and providing more money to schools via higher taxes, with only 26 percent opposed. But while 69 percent of Democrats say yes to higher taxes for schools, only 38 percent of Republicans and 30 percent of independents say the same.

People living in urban areas are more likely than those in rural areas to support such a tax increase, 57 percent to 40 percent.

Stephen White, a high school teacher in Marysville, California, said raising taxes is "probably the only way" to pay for teacher raises. "Look at states that cut taxes and some districts had to go to four-day school weeks."

That had happened in Oklahoma, where teachers staged a nine-day walkout earlier this month to protest the level of classroom funding.

White said he used to be anti-union when he worked in the private sector, but changed his position when he became a teacher. He said salaries don't take into account all that teachers do, especially outside the normal school day.

"The private sector makes double what we do," he said. He acknowledged that strikes are disruptive. "We don't like that, but sometimes drastic times call for drastic measures."

The AP-NORC poll of 1,140 adults was conducted April 11-16 using a sample drawn from NORC's probability-based AmeriSpeak Panel, which is designed to be representative of the U.S. population. The margin of sampling error for all respondents is plus or minus 4.0 percentage points.

Q&A: How Walkout by Arizona Teachers is Expected to Play Out Arizona Teachers Vote for Statewide Walkout Pima County Supe Talks Education Funding Amid Protests Over Teacher Pay
By posting comments, you agree to our
AZPM encourages comments, but comments that contain profanity, unrelated information, threats, libel, defamatory statements, obscenities, pornography or that violate the law are not allowed. Comments that promote commercial products or services are not allowed. Comments in violation of this policy will be removed. Continued posting of comments that violate this policy will result in the commenter being banned from the site.