Temporary Bridge to Ease Traffic Again During I-10 Work

A project at I-10 and Wilmot marks the second time ADOT has used temporary bridges in the Tucson area. by Zachary Ziegler TWEET SHARE 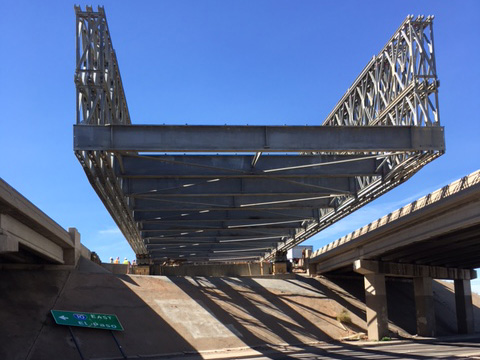 VIEW LARGER A temporary bridge is put in place at I-10 and Craycroft. The temporary bridge was used to allow crews to complete maintenance work on two permanent bridges.
Arizona Department of Transporation

For the second time in as many years, the Arizona Department of Transportation will use a temporary bridge so it can minimize traffic issues while repairing bridges in the Tucson area.

The use of the temporary bridge allows crews to do maintenance work on the permanent eastbound bridge. The bridge will again be used for the westbound bridge.

"We're looking at late August, early September, right around Labor Day, where we will be moving eastbound traffic back to the eastbound bridge when we're done with that work," said ADOT's Tom Herrmann. "Then we'll move the westbound traffic over to the temporary bridge and do the same thing."

Westbound bridge work is expected to be completed in December.

Herrmann said the biggest change for drivers on the interstate is a speed limit drop from 65 miles an hour to 55.

Herrmann said successful use of the temporary bridge at Craycroft made the department more comfortable with such projects, and that Tucson drivers should expect to see further use of temporary bridges for ADOT projects in the future.

New Lanes Planned for I-17 in Effort to Relieve Traffic I-10 Widening Project to Begin Next Week Groups Work to Reduce Blowing Dust Risk on I-10
By posting comments, you agree to our
AZPM encourages comments, but comments that contain profanity, unrelated information, threats, libel, defamatory statements, obscenities, pornography or that violate the law are not allowed. Comments that promote commercial products or services are not allowed. Comments in violation of this policy will be removed. Continued posting of comments that violate this policy will result in the commenter being banned from the site.