Some say the 9th Circuit Court of Appeals decision may be too late. by Laurel Morales, Fronteras Desk TWEET SHARE 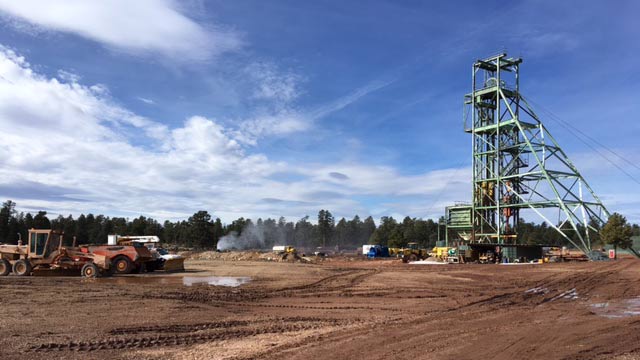 Canyon Mine is one of the few mines allowed to operate despite the moratorium.
Laurel Morales, Fronteras Desk

The 9th Circuit Court of Appeals issued a new opinion in a decades-long battle involving uranium mining on land outside Grand Canyon National Park. But some say the decision may be too late.

In 1988 when the Forest Service first approved the Canyon Mine south of the park, all the proper environmental and historical assessments were done. At the time, the neighboring Red Butte was not on the National Register of Historic Places. Today it is. The Havasupai Tribe considers Red Butte to be sacred.

So the 9th Circuit panel said Canyon Mine should no longer be exempt from the mining ban and sent the case back to District Court.

But Grand Canyon Trust's Amber Reimondo says groundwater may already be contaminated. The recently sunk mine shaft breached an aquifer that now requires constant pumping to remove contaminated water from the mine.

"We hoped this argument could be heard several years ago," Reimondo said. "And it's taken several years of getting unfavorable decisions to now be back on the tracks."

In 2012 the Obama administration banned all new mining claims on land surrounding Grand Canyon National Park. Energy Fuels Resources argued that Canyon Mine should be exempt, because the company had valid and existing rights. So, the Forest Service gave the company permission to mine again.

Controversial Oak Flat mine moves closer to reality Apache Stronghold files temporary restraining order and lien to stop transfer of Oak Flat U.S. Army Corps of Engineers weighs its authority over Rosemont Mine
By posting comments, you agree to our
AZPM encourages comments, but comments that contain profanity, unrelated information, threats, libel, defamatory statements, obscenities, pornography or that violate the law are not allowed. Comments that promote commercial products or services are not allowed. Comments in violation of this policy will be removed. Continued posting of comments that violate this policy will result in the commenter being banned from the site.