The move is in response to Obama's use of the Antiquities Act to set aside 1.35 million acres for Bear's Ears National Monument. by Laurel Morales, Fronteras Desk TWEET SHARE 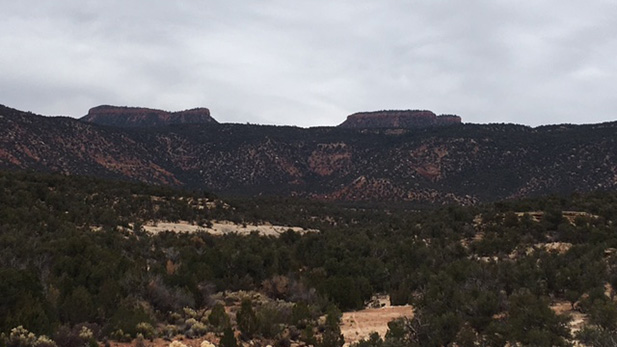 Bears Ears is considered sacred by many tribes and communities in the Southwest.
Laurel Morales/Fronteras Desk
LISTEN

Utah lawmakers introduced legislation Tuesday that would limit the size and scope of the Antiquities Act to protect smaller parcels of land with the buy-in of local communities and states.

The legislation is a response to President Barack Obama's use of the use of the Antiquities Act to set aside 1.35 million acres as Bear's Ears National Monument in southern Utah. While five Native American tribes say this land is sacred, Republican Congressman Rob Bishop says Utah lawmakers did not want that monument.

The legislation would limit the size of national monuments to no more than 10,000 acres and keep its boundaries at least 50 miles from a neighboring monument. A larger monument would have to be approved by county and state leaders. If passed, the law would also give the president authority to shrink existing monuments.

Navajo request federal funding to hire coroners Conservationists: Mexican government failing to protect vaquita Grijalva asks feds to 'respect tribal lands' during border construction
By posting comments, you agree to our
AZPM encourages comments, but comments that contain profanity, unrelated information, threats, libel, defamatory statements, obscenities, pornography or that violate the law are not allowed. Comments that promote commercial products or services are not allowed. Comments in violation of this policy will be removed. Continued posting of comments that violate this policy will result in the commenter being banned from the site.