Learn how recent medical advances are helping doctors in Tijuana save lives on both sides of the border. Tweet

A young woman walked into Tijuana’s tuberculosis (TB) clinic with a little plastic jar in her hand containing a sample of her saliva. She dropped it off at the front desk, and left. She didn’t need to see Dr. Rafael Laniado this time, because she had been taking her medications and her tuberculosis had been under control for months.

“When you visit this clinic, I can tell you if you have tuberculosis within three weeks,” said Laniado, the chief neumologist at the Tijuana TB clinic, the most efficient facility of its kind in Mexico. “I can also tell you in a short amount of time whether you are resistant to any drugs, which is the most important part of getting tested.” 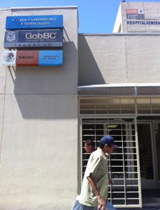 Tijuana's state-of-the-art tuberculosis lab is the most successful in treating the disease in all of Mexico. (PHOTO: Ruxandra Guidi)

This is remarkable for Mexico, where tuberculosis testing generally means waiting for more than three months to get a diagnosis and having to send samples to Mexico City or to a lab in the United States.

Tijuana’s state-of-the-art lab opened in 2006, with funding from the Mexican government as well as $400,000 from USAID for construction and testing equipment. Today, Tijuana has the most success in the treatment of drug-resistant TB in Mexico, seeing an average of 700 new cases a year.

Between appointments, Laniado took a look at a patient’s X-ray, holding it up close to the light.

“He’s stable,” he said to the nurse. “Tell him to come back next week.”

If that patient were to stay in Tijuana, this lab would make sure he got tested regularly and took his medicine. But if he happens to cross the border into the U.S., his health records and specific prescription will be available in a bi-national database. This sharing of health records allows American doctors to keep treating him so that his TB doesn’t become drug-resistant.

“When I see a case here, I don’t diagnose it and treat it all by myself,” Laniado said. “Instead, I present it at a virtual meeting with other tuberculosis doctors from the other side of the border, who understand the immigrant population.” 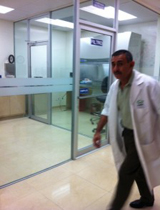 A lab technician who performs culture testing at the Mexican facility. He frequently trains alongside his U.S. counterparts. (PHOTO: Ruxandra Guidi)

As a major crossing point for rural and poor migrants into the United States, Tijuana is in a unique position to treat and prevent the spread of this infectious disease. About 90 percent of people seen at this lab go on to keep their TB under control. But those who fail to get treatment typically go on to infect 10 to 15 others.

At a recent public-health conference in San Diego, the lessons and challenges of Tijuana’s lab took center stage. Steve Waterman was there on behalf of the Centers for Disease Control.

“Tuberculosis rates in the U.S. are really at an all-time low. But parts of the country like California and San Diego – where there’s a high number of foreign-born persons – have higher rates than the rest of the country,” said Waterman, an expert on infectious diseases across borders. “I think the Tijuana-San Diego partnership is a very focused collaboration and it’s addressing a very important need.”

One of the reasons this collaboration works is the binational sharing of resources, medical training, and common goals. At a time when budget cuts are hurting public health programs in both countries, the Tijuana-San Diego area has been able to raise money from foundations and groups, like Rotary International, to make up for the shortfall.

This summer, the San Diego-based International Community Foundation will step in as well, donating more than $30,000 to TB labs in Tijuana and Mexicali to pay for testing-equipment maintenance and personnel.

“In our border region, people work in silos, agencies work in silos,” said Richard Kiy, International Community Foundation president. “Often it’s difficult to move resources across the border to promote these types of bi-national collaboratives that are so necessary when you’re trying to treat a disease that impacts both sides of the border.”

Other states along the border, like Arizona and Texas, have TB rates close to the national average—about 3 active TB cases per 100,000 residents. One of the reasons California’s tuberculosis rate is double that is perhaps due to the success of this program: More people are getting tested and treated.

Ruxandra Guidi
Fronteras reporter Ruxandra Guidi (San Diego Bureau) has ten years of multimedia journalism experience. Her work has aired on PRI’s The World, Marketplace, the BBC, NPR, and CBC along with printed publications in both English and Spanish. She has focused primarily on the environment, development, labor, the economy, health, immigration and poverty in the U.S. and Latin America. Ruxandra is originally from Caracas, Venezuela. She graduated from the School of Journalism at UC Berkeley and holds a B.A. in political science and Latin American studies from Rutgers University.
MORE: Arizona, Arizona Spotlight, Health & Medicine, Immigration

Did "Star Trek" change the world? Author Ryan Britt examines a legacy lasting 50 years and beyond. Department of Corrections hires controversial private health care company A grassroots Tucson baker wins a national award for excellence.
By posting comments, you agree to our
AZPM encourages comments, but comments that contain profanity, unrelated information, threats, libel, defamatory statements, obscenities, pornography or that violate the law are not allowed. Comments that promote commercial products or services are not allowed. Comments in violation of this policy will be removed. Continued posting of comments that violate this policy will result in the commenter being banned from the site.