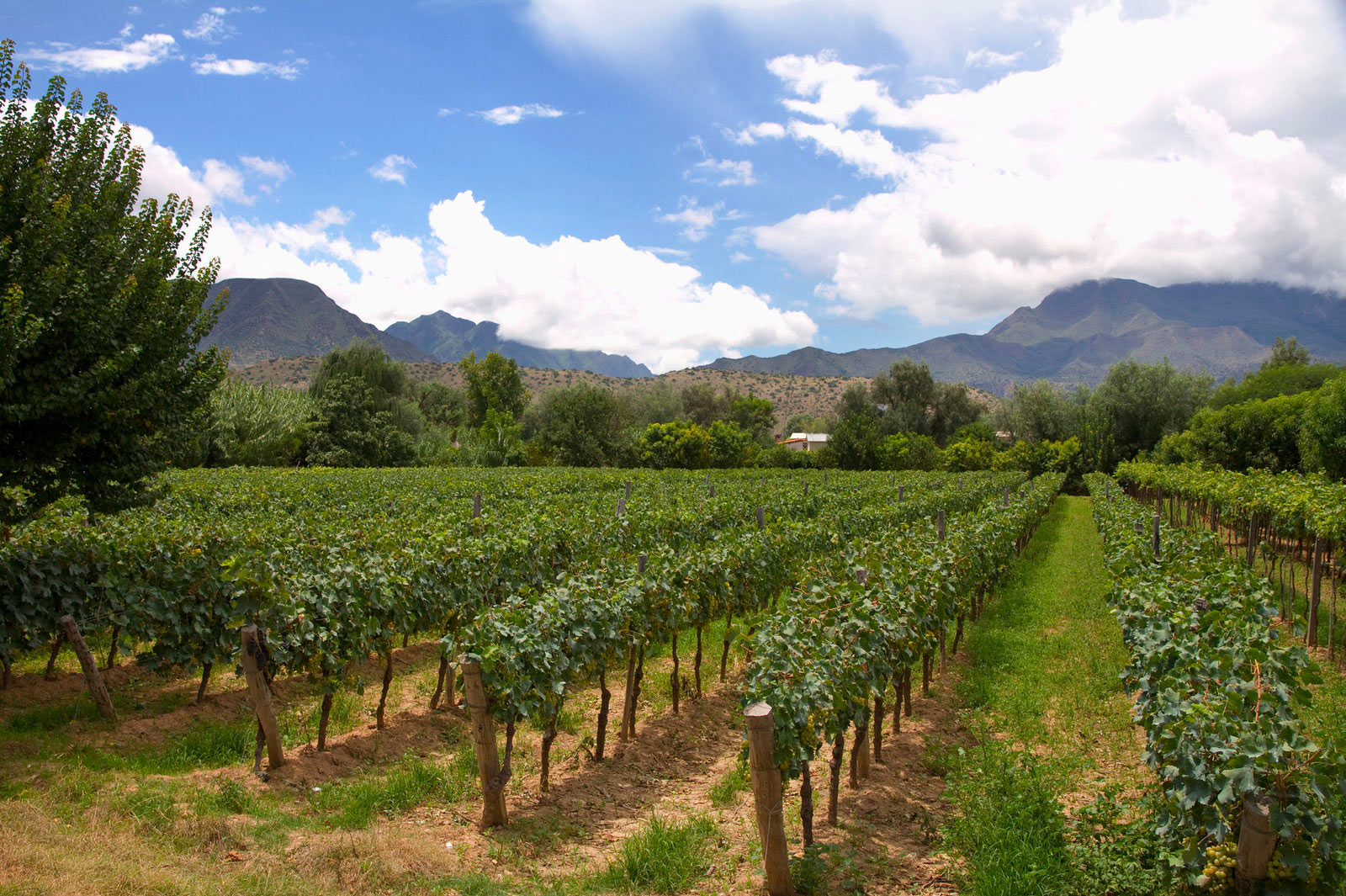 A vineyard in Tarija, Bolivia, the center of the country's wine industry. A growing number of wineries here are improving their techniques, ramping up production and starting to export, as global interest in Bolivia's award-winning wines grows.
Insights/Universal Images Group/Getty Images
Bolivia is better known for snow-capped mountains than sun-drenched vineyards, but the landlocked South American nation is starting to turn heads for award-winning wine.

Bolivia's wine industry is based in the southern city of Tarija, near the southern border with Argentina. This region has long produced small amounts of artisanal wine, as well as the distilled grape-based spirit known as singani, the national drink. But a growing number of wineries here are improving their techniques, ramping up production and starting to export.

While leading a half-dozen wine aficionados through the Aranjuez winery in Tarija, Gerardo Aguirre, export manager for the company, says: "They want Bolivian wine in Chile! Bolivian wine is exotic. We are a high-altitude wine. Here at Aranjuez, we are getting a lot of medals in really serious contests."

Spanish settlers introduced winemaking to South America in the 1600s. The industry took hold in Argentina and Chile, which are home to temperate climates and flatlands well-suited for vineyards. Those two nations are now among the world's top-10 wine-producing countries; Bolivia does not come anywhere close to making the list.

Part of the reason has to do with geography. Bolivia sits closer to the equator and is dominated by Amazon jungle and the Andes Mountains. That leaves relatively little space to grow grapes, with many of the country's vineyards located in mountain valleys and foothills more than a mile high.

To take advantage of the altitude, Aranjuez and other wineries began planting a red wine grape called tannat. This variety, which originated in France and is now grown in many winemaking regions around the world, has a thicker skin to resist the intense sunlight of high altitudes. The grapes produce bold and intense wines that have often impressed sommeliers.

"Our wines have more tannins and antioxidants, more potent aromas and a darker color," says Ricardo Ortuño, president of Bolivia's national wine makers association. "This is how we stand out."

A breakthrough came at a contest of tannat wines held in Uruguay in 2013. That's when Aranjuez's entry bested wines from other South American countries to win Bolivia's first-ever grand gold medal, the highest accolade bestowed at competitions by the international wine industry.

The country's wines also have been lauded in publications ranging from Wine Enthusiast to The Washington Post. Globalization has led to complaints of wine tasting similar around the world, as new producers often attempt to mimic old world wines. But Post wine critic David McIntyre wrote that Bolivia's best tannats stand out as "vibrant, polished and with impressive complexity."

Gustavo Pinedo, who is growing 62 acres of tannat grapes on his farm on the outskirts of Tarija, says: "I think wine drinkers are looking for new things. And the difference here is the high altitude."

The growing prominence of Bolivia's wine industry brings thousands of visitors to Tarija every year. Carla Lema, a tour guide at Campos de Solana, another big winery in the city, says that the company hosted 12,000 visitors last year. 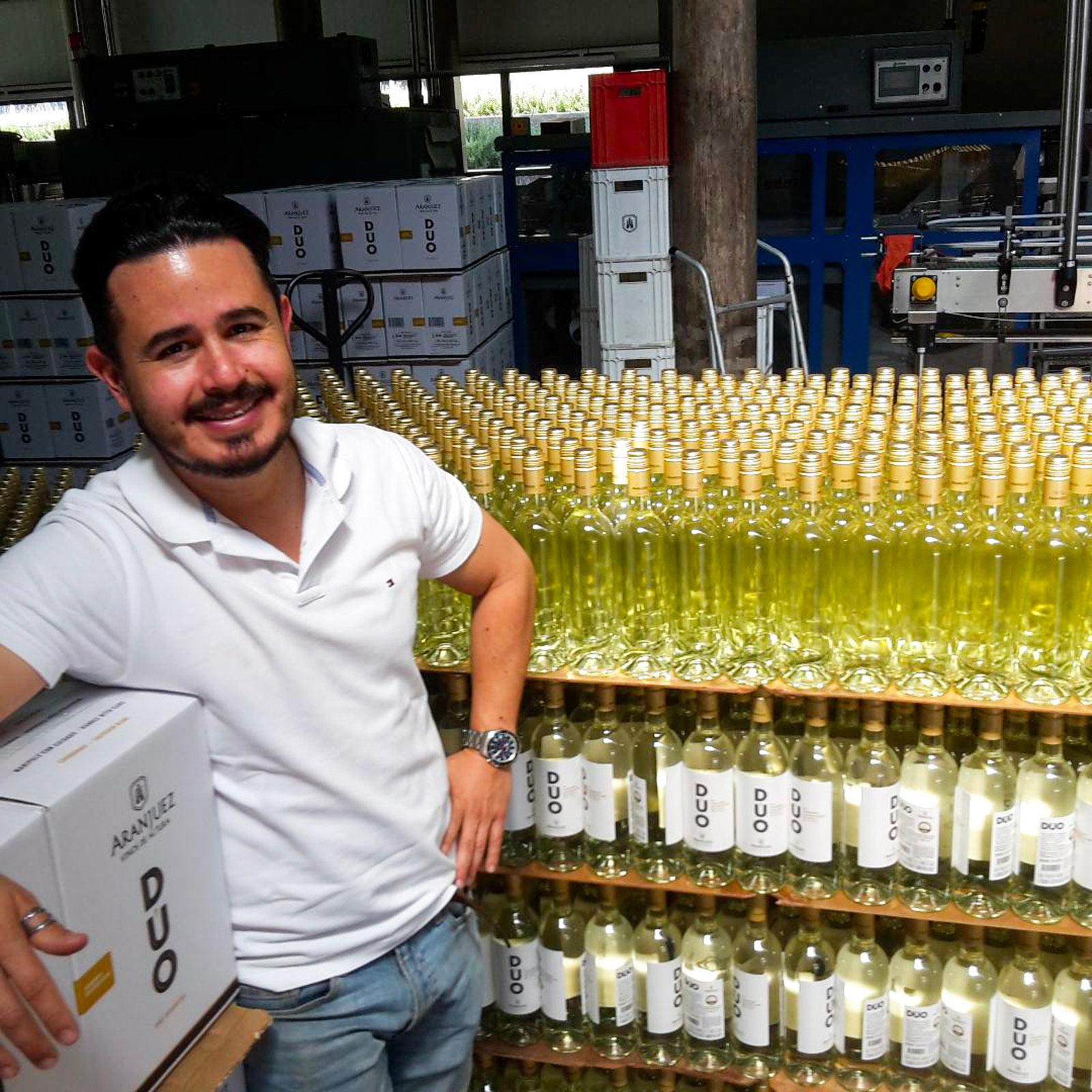 Gerardo Aguirre, export manager for the Aranjuez winery in Tarija, Bolivia, surrounded by bottles of the company's wines.
John Otis

Many board tour buses that ferry them from one winery to the next during a five-hour stretch. On one bus, Bolivian folk music blared from the sound system as passengers clapped and sang along. They were a jolly bunch, in part because rather than using spit buckets at the tastings, they simply swallowed the wine.

One of the tourists, José Adre, a liquor importer who lives in neighboring Paraguay, says his company wants to start buying Bolivian wine.

But it remains difficult to find Bolivian wine overseas, and it is available in only a handful of shops in the U.S. Nearly all of it is sold in Bolivia, where over the past decade, the economy and wine consumption have both been expanding.

Bolivian winemakers are scrambling to produce more for export but are limited by the lack of suitable land. While Chile and Argentina together grow about 1 million acres of grapes, Bolivia's vineyards cover just 11,000 acres. In addition, more than half of the harvest is used for white wine, singani and table grapes. World wine production in 2018 was 29.3 billion litres, with Bolivia contributing just a tiny fraction of the total: about 15 million litres, according to Ortuño.

"We are planting more but right now, we don't have enough" grapes, says Lema of the winery Campos de Solana.

Still, Aguirre of the Aranjuez winery points out that it wasn't so long ago that Bolivian wine was unheard of beyond the country's borders.

"But now we are making good wine," he says. "We have the same quality as Argentina and Chile. And that's because of the grapes, a lot of learning, and, of course, a lot of work."

House Votes On Bill Endorsing Use Of 25th Amendment Against Trump House votes to impeach President Trump The Cat Who Came Back: Patches, Believed Killed In Mudslide, Shows Up 3 Years Later
By posting comments, you agree to our
AZPM encourages comments, but comments that contain profanity, unrelated information, threats, libel, defamatory statements, obscenities, pornography or that violate the law are not allowed. Comments that promote commercial products or services are not allowed. Comments in violation of this policy will be removed. Continued posting of comments that violate this policy will result in the commenter being banned from the site.