The Broadway diva talks about her stellar career, what it was like to write her memoir, her role on TV's 30 Rock, and the concert she is bringing to Tucson. by Mark McLemore TWEET SHARE 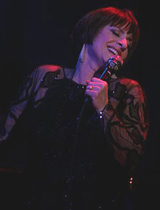 Pattie LuPone in The Lady with the Torch at Carnegie Hall, 2005 (PHOTO: pattilupone.net)

Patti LuPone has had the kind of career that most entertainers dream about, starring in a host of Broadway's biggest successes, along with occasional television work including recent appearances on NBC's 30 Rock.

Patti will perform a special concert called The Gypsy in My Soul at the U of A's Centennial Hall on Sunday, March 4th, so I asked her what she felt was most important to bring along with her...

Herb Alpert Ben Vereen "Teddy Tonight!"
By posting comments, you agree to our
AZPM encourages comments, but comments that contain profanity, unrelated information, threats, libel, defamatory statements, obscenities, pornography or that violate the law are not allowed. Comments that promote commercial products or services are not allowed. Comments in violation of this policy will be removed. Continued posting of comments that violate this policy will result in the commenter being banned from the site.