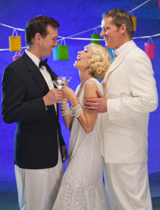 The Arizona Theatre Company's newest production is The Great Gatsby, a play that has gone through a long gestation process to become the first-ever officially approved stage adaptation of F. Scott Fitzgeralds' renowned jazz age classic.

Mark McLemore got the chance to go backstage at one of the play's early rehearsals, to talk with director Stephen Wrentmore, as well as the play's romantic leads -- David Andrew Macdonald, who plays the role of Jay Gatsby, and Monette Magrath, who plays Daisy Buchanan -- to find out how they are bringing to life a story that many consider to be the great American novel...

This is currently the last week for The Great Gatsby in Tucson, with performances happening at the Temple of Music & Art through March 17th. The company then moves to Phoenix for a run from March 22nd - April 8th, 2012.

The Arizona Theater Company is an underwriter of Arizona Pubic Media.

The great white whale, sighted in Tucson! "The 89-90 Trip" reaches its destination. Finding perspective on race and privilege: "Master Harold"... and the Boys
By posting comments, you agree to our
AZPM encourages comments, but comments that contain profanity, unrelated information, threats, libel, defamatory statements, obscenities, pornography or that violate the law are not allowed. Comments that promote commercial products or services are not allowed. Comments in violation of this policy will be removed. Continued posting of comments that violate this policy will result in the commenter being banned from the site.