A 'Lamborghini' Of Chariots Is Discovered At Pompeii. Archaeologists Are Wowed

The chariot survived the eruption and the intervening years because it was stored inside a portico. by NPR/Becky Sullivan Producer, All Things Considered Tweet 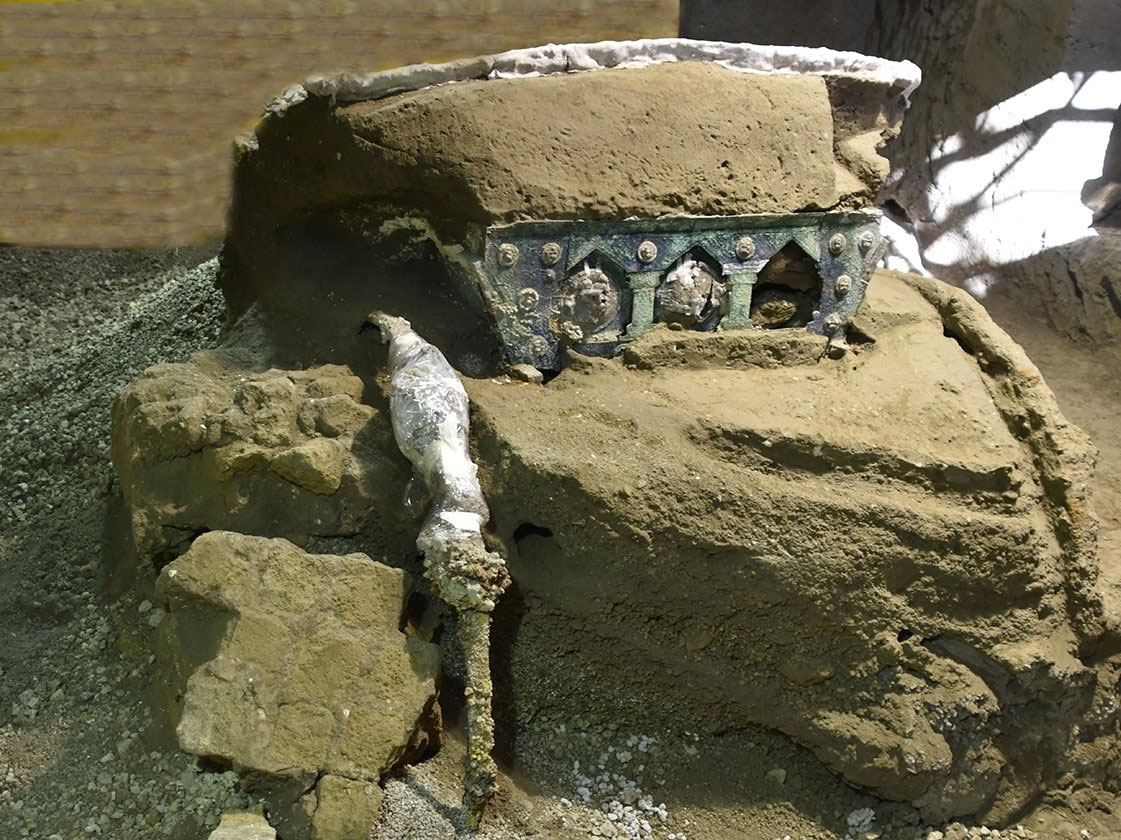 A well-preserved chariot discovered in Pompeii has been described as an "extraordinary find" and has iron wheels, bronze and tin decorations and mineralized wood.
Archaeological Park of Pompeii

Calling it an "exceptional discovery," researchers at Pompeii have announced the uncovering of an intact ceremonial chariot from a villa near the famous Italian archaeological site.

The announcement Saturday called the chariot "an extraordinary find" that "has no parallel in Italy thus far."

The chariot is preserved in remarkable detail, officials say, with four iron wheels, metal armrests and backrests, and a seat perched atop that could sit one or two people. Notably, the chariot is adorned with metal medallions depicting satyrs, nymphs and cupids, suggesting the possibility that it may have been used in marriage ceremonies.

"I was astounded," said Eric Poehler, a professor at the University of Massachusetts Amherst who has a specialty in traffic in ancient Pompeii. "Many of the vehicles I'd written about before ... are your standard station wagon or vehicle for taking the kids to soccer. This is a Lamborghini. This is an outright fancy, fancy car."

Archaeologists worldwide expressed similar excitement Saturday over the announcement. "Still wrapping my head around the latest incredible discovery," wrote Sophie Hay of the University of Cambridge. "My jaw is on the floor just now!" wrote Jane Draycott of the University of Glasgow. A single exclamation point did not suffice for historian and writer Rubén Montoya, who wrote in Spanish that Pompeii "does not stop giving us surprises!!!"

The ancient city of Pompeii has been the subject of fascination and archaeological digs for hundreds of years. It was buried in volcanic ash from Mount Vesuvius nearly 2,000 years ago, a disaster that preserved in incredible detail the buildings and ephemera of the city and even the shapes of the bodies of the Romans who once walked the city's streets. 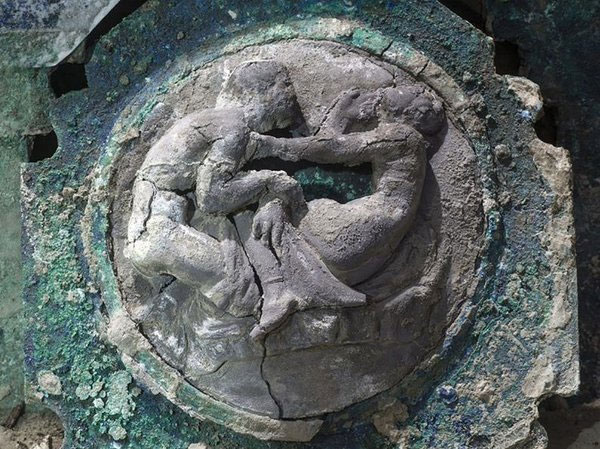 According to Italian authorities, the chariot survived the eruption and the intervening years because it was stored inside a portico. The eruption caused the walls and ceiling around it to collapse under the weight of volcanic ash. In recent years, looters had dug tunnels on either side. But "miraculously," officials say, the chariot was spared.

While previous excavations had yielded everyday vehicles used for travel and work, this ceremonial chariot is the first find of its kind to be discovered, explained Massimo Osanna, the outgoing director of the site.

"It is an extraordinary discovery for the advancement of our knowledge of the ancient world," Osanna said in a statement.

Every so often, some new discovery from Pompeii prompts excitement from historians about the glimmer of understanding it reveals about the residents of the ancient world: their fast-food preferences, how their taverns were decorated, their unlucky deaths.

Even among those semi-frequent discoveries, Poehler says, this chariot stands out.

"This is precisely the kind of find that one wants to find at Pompeii, the really well-articulated, very well-preserved moments in time," he said. "And it happens to be in this case an object that is relatively rare despite its ubiquity in the past."

Saturday, September 11: Watch Live: A Day of Remembrances And Reflection: 20 Years After 9/11 Scientists Say They Could Bring Back Woolly Mammoths. But Maybe They Shouldn't The Buzz returns Friday at 8:30 am on NPR 89.1
By posting comments, you agree to our
AZPM encourages comments, but comments that contain profanity, unrelated information, threats, libel, defamatory statements, obscenities, pornography or that violate the law are not allowed. Comments that promote commercial products or services are not allowed. Comments in violation of this policy will be removed. Continued posting of comments that violate this policy will result in the commenter being banned from the site.