Jupiter is well-known for being the biggest planet in our solar system, and it's also home to the biggest storm. by Brendan Byrne Space Reporter and 'Are We There Yet?' Host Tweet 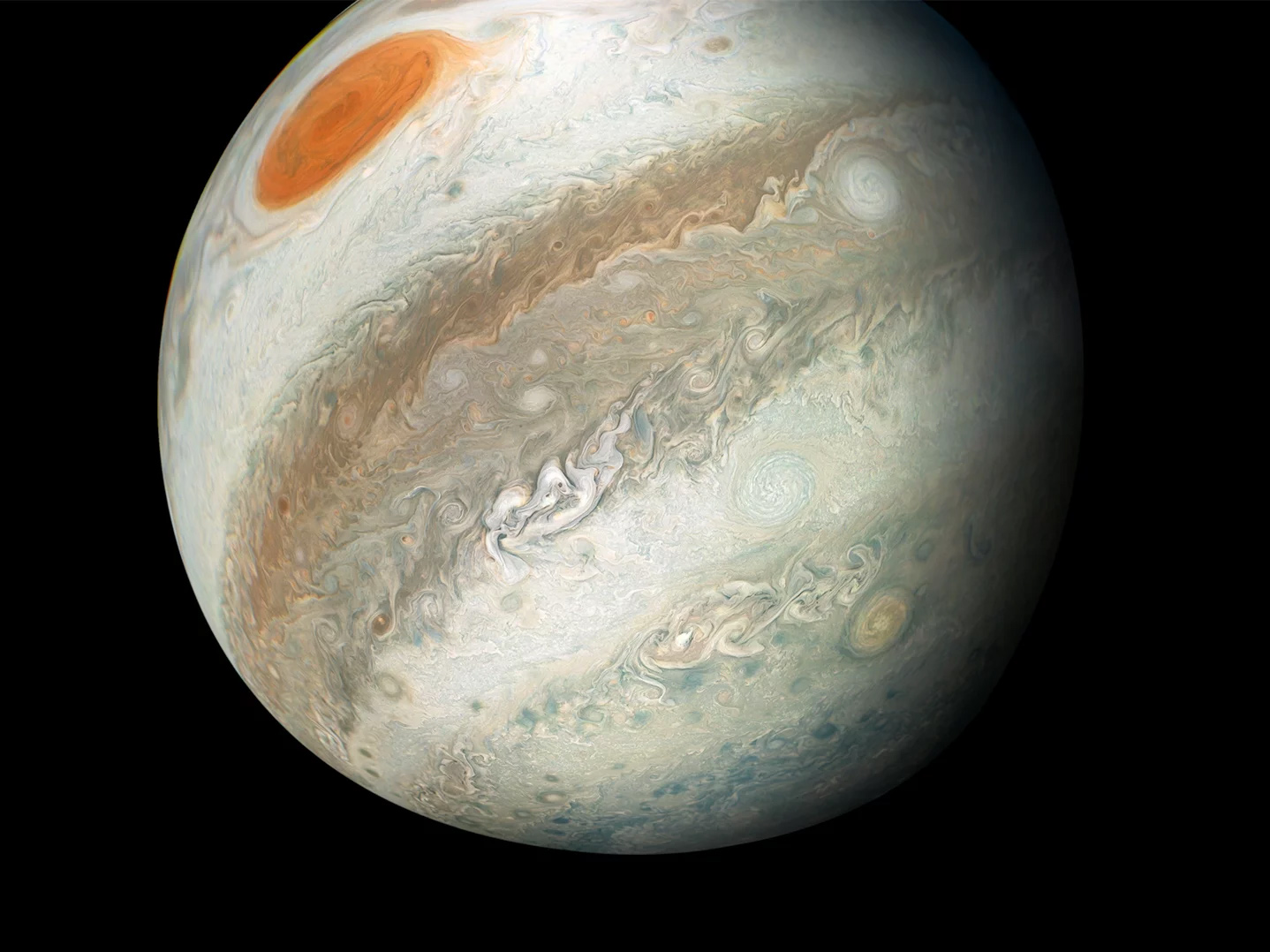 This new perspective of Jupiter from the south makes the Great Red Spot appear as though it is in northern territory. This view is unique to Juno.
NASA/JPL-Caltech/SwRI/MSSS/Gerald Eichstäd/Seán Doran © CC NC SA
It's called the Great Red Spot, an enormous vortex that has been swirling for centuries. It's bigger than our own planet, and yet we don't know much about it. Until now, scientists could only observe the spot from afar. But thanks to a NASA spacecraft launched a decade ago, we're finally getting a look inside Jupiter's storm.

The Great Red Spot is like a storm here on Earth, but supersized. "It's basically clouds," says Paul Byrne, a planetary scientist at Washington University in St. Louis. Really, "it's not all that dissimilar to the kinds of things we know as cyclones or hurricanes or typhoons on Earth."

At 10,000 miles across, the Great Red Spot is the largest storm in our solar system and has been continually observed for around 200 years, but it's been around for much longer. (Compare that with big storms on Earth, which generally last a few days or weeks at most.)

"We believe this thing is really old," says Scott Bolton, principal investigator of NASA's Juno mission. "How it lasts that long is a mystery."

Before Juno, scientists could only observe the storm from afar. Even from a distance, they noticed it was changing shape and actually shrinking. 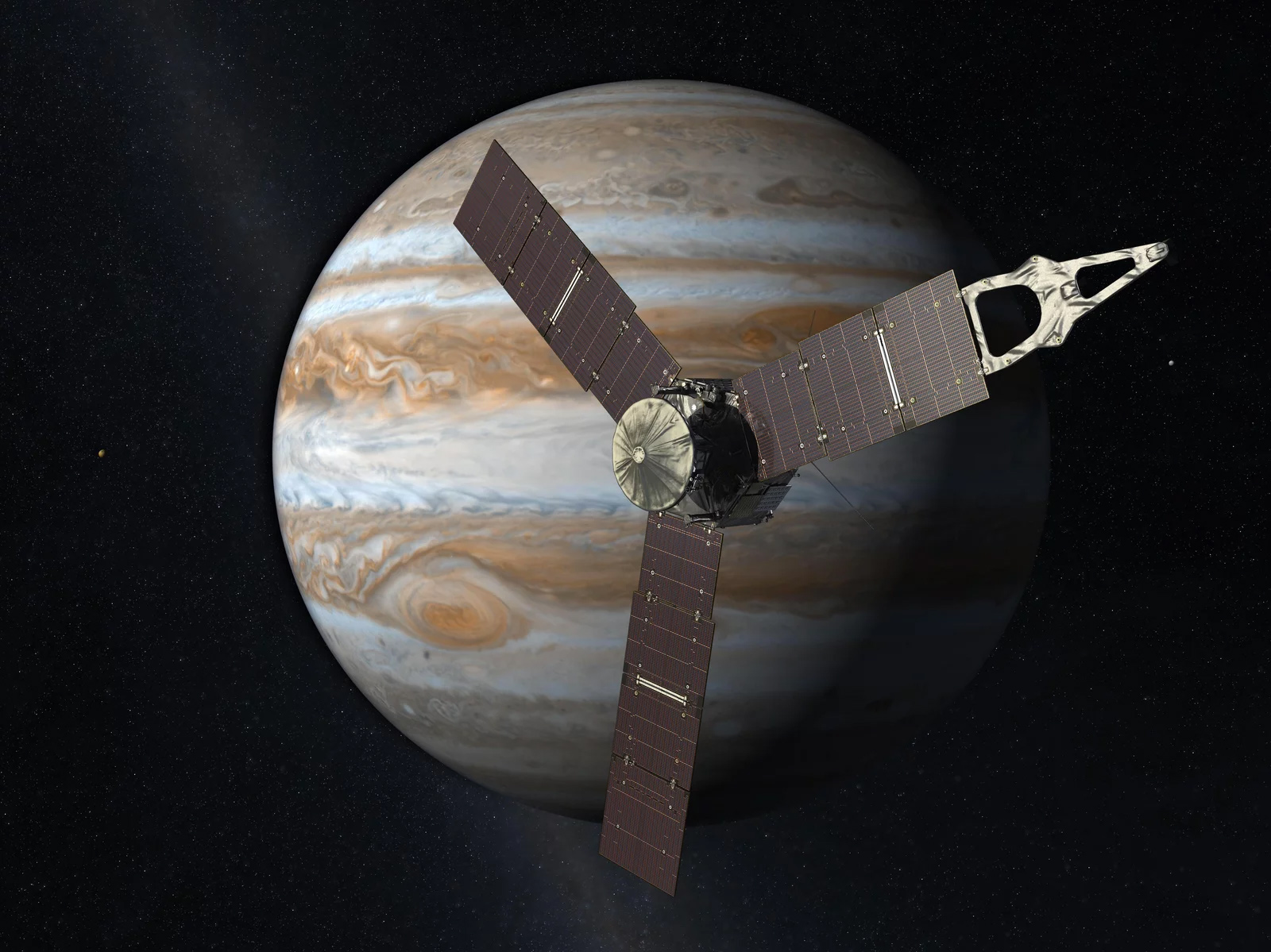 This illustration depicts Juno in an elliptical, polar orbit around Jupiter.
NASA

NASA's Juno mission launched from Cape Canaveral Space Force Station in Florida back in 2011 and arrived at Jupiter in 2016. In 2019, the spacecraft changed course slightly and passed over the Great Red Spot twice.

Bolton and his team used microwave sensors to slice into the depths of the storm, getting the first 3D model of the Great Red Spot. "It's a pancake, because it's so wide at the top. But the depth of that pancake is much thicker than what we would have anticipated."

The microwave observations show these storms on Jupiter, called vortices, extend below the cloud deck of the planet. In the case of the Great Red Spot, it extends at least 200 miles into the clouds of Jupiter, beyond the depths of where clouds form and water condenses.

"That's very different than the way we think Earth's atmosphere works, which is largely driven by water, clouds, condensation and sunlight," says Bolton. "How that works is going to require new models and new ideas to explain."

"The local gravity tends to pull and push away the spacecraft as it flies over the vortex, and this creates sort of like bumps in the road for Juno," says Marzia Parisi, a Juno scientist from NASA's Jet Propulsion Laboratory in Southern California and lead author of a paper in the journal Science on gravity overflights of the Great Red Spot.

Scientists here on Earth could see the effect of these gravitational "bumps." That's because every time they jostled Juno, they nudged the spacecraft closer to or farther from Earth. That changing distance caused the radio waves sent back to Earth some 400 million miles away to be subtly squeezed and stretched, a phenomenon known as a Doppler shift.

Using this effect, the spacecraft could pick up tiny jostles as small as 0.01 millimeters per second.

"The precision required to get the Great Red Spot's gravity during the July 2019 flyby is staggering," says Parisi. The findings from the gravity observations complemented Bolton's earlier microwave measures, concluding the storm penetrates some 300 miles into Jupiter's atmosphere.

The shrinking spot
Observations of the Great Red Spot show that it's shrinking. For nearly a century and a half, the iconic spot has been getting smaller and it's unclear just how long it will last.

Juno is taking a closer look at this phenomenon. "What we're doing is seeing up close what's happening while that shrinking has happened," says Bolton.

The spacecraft is observing flecks of the storm getting caught up in neighboring clouds. The storm itself also appears to be trapped by powerful conveyer belts of wind on the planet that are stabilizing the storm.

"I don't think the theory is very far advanced to the sense where we can connect all of that to the changes in the size," said Bolton.

Data from Juno will help scientists predict what could possibly happen to the Great Red Spot.

"Understanding what's happening with the storm now allows scientists to make much more sophisticated models to simulate what we see and then make predictions for what will happen in the future, including up to perhaps when the Great Red Spot may eventually go away," says planetary scientist Paul Byrne.

Understanding other Jupiter-like planets
The findings from the Juno spacecraft are shedding light on the early formation of giant planets like Saturn, Uranus and Neptune — and even planets beyond our own solar system.

"When we get up close, and this is the first planet we've actually been able to open up and look inside, this is going to tell us a lot about how giant planets work throughout the galaxy," says Bolton. 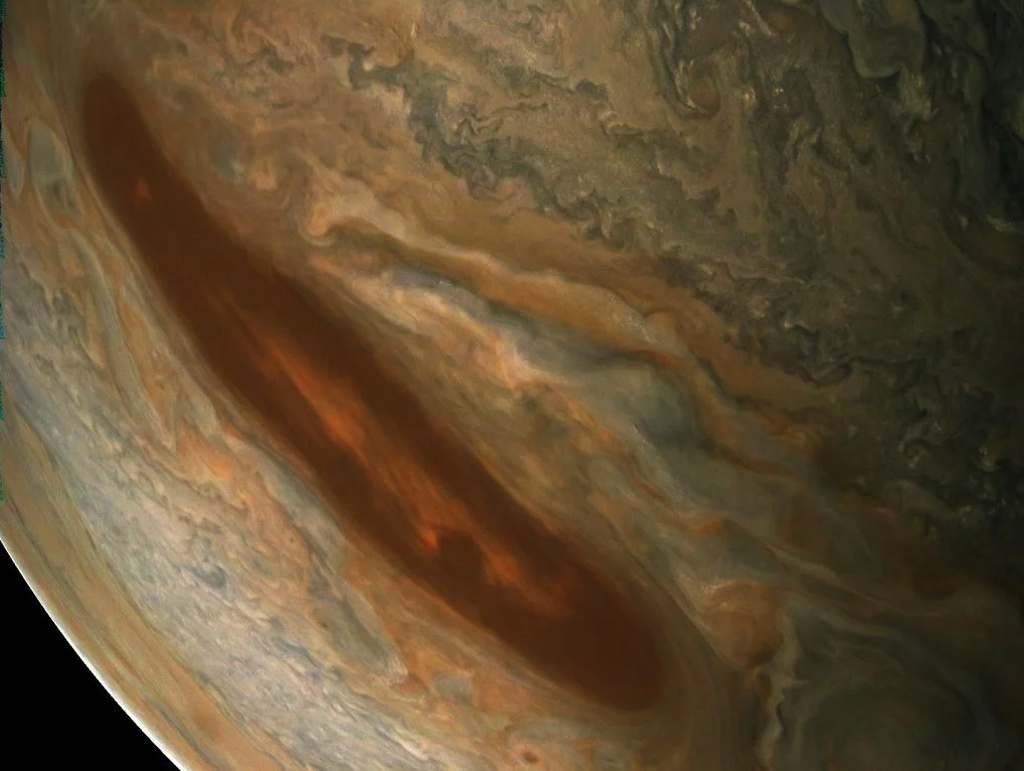 To date, astronomers have identified thousands of exoplanets — planets that orbit a star other than our sun. These planets are far away, with the closest one around 10.5 light-years from Earth. That makes observing what's happening on the surface difficult.

Around 1,400 of these exoplanet candidates are thought to be gas giants, much like Jupiter. Understanding what happens on Jupiter can help scientists get a better sense of what's happening beyond our solar system.

"By understanding the physics and the processes that go into shaping Jupiter," says Byrne, "we'll get a better better understanding of not just Jupiter, but of these kinds of worlds."

Watch: Former Secretary of State Colin Powell's funeral service NPR books editor Petra Mayer has died Rep. Gosar is censured over an anime video showing him killing AOC
By posting comments, you agree to our
AZPM encourages comments, but comments that contain profanity, unrelated information, threats, libel, defamatory statements, obscenities, pornography or that violate the law are not allowed. Comments that promote commercial products or services are not allowed. Comments in violation of this policy will be removed. Continued posting of comments that violate this policy will result in the commenter being banned from the site.