Geologists say there's a simple explanation for the increase: a statewide network of sensors are sending back the most accurate seismological data in the state's history. The 8-sensor network is designed to detect even the smallest of earthquakes, the ones that we can't even feel.

Seismic maps of Arizona show a number of areas that are particularly prone to earthquakes. They include the far southwest corner of the state, the Arizona Strip northwest of the Grand Canyon, and areas along the Mogollon Rim. Few of the quakes detected in these areas measured a magnitude higher than 3.5.

But the state has experienced much larger quakes, including a 7.0+ that struck just south of the U.S./Mexico border in 1887. It caused widespread damage as far north as Phoenix. Geologists say parts of southern Arizona, while relatively quiet seismically, could actually produce some of the largest quakes.

Reporter Mark Duggan interviewed Lee Allison, state geologist and director of the Arizona Geological Survey, about when and where the ground beneath Arizona is shaking. 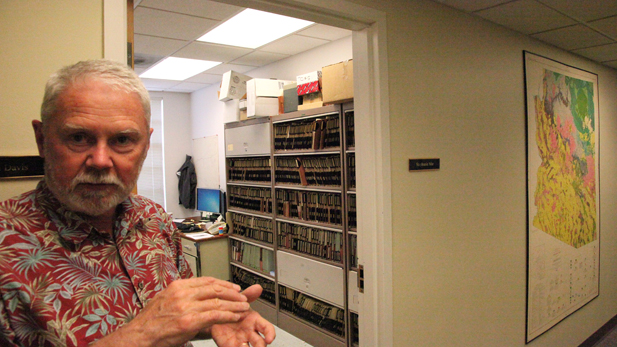 Listen to the complete interview with State Geologist Lee Allison:

"Chasing the Ghost Bear: On the Trail of America’s Lost Super Beast" with author Mike Stark. Artist Michael Moore and the natural world in charcoal. Travel Route 66 with "The Great Muslim American Road Trip."
By posting comments, you agree to our
AZPM encourages comments, but comments that contain profanity, unrelated information, threats, libel, defamatory statements, obscenities, pornography or that violate the law are not allowed. Comments that promote commercial products or services are not allowed. Comments in violation of this policy will be removed. Continued posting of comments that violate this policy will result in the commenter being banned from the site.