The next stop on the travel itinerary is Montana's fifth largest city. by Lisa Schnebly Heidinger Tweet

And now we go on. We’d been told “the best breakfast around Browning is at the casino,” so we found the Blackfeet Glacier Peaks Casino. We don’t normally seek out casinos if only because of the pernicious smoke scent that no one noticed decades ago, but it’s also a way to support the tribe, and we love that.

Once when Toph was little, he was turning the yogurt maker handle in the kitchen at the folks’ house while the rest of us were eating in the dining room. We heard a clatter and crash, and then softly, “Big mistake. Big mistake.”

Well, I was reminded of that because of our choice. Walkthrough the smoky room full of ringing noises and flashing lights to a counter where the choices are…standard. 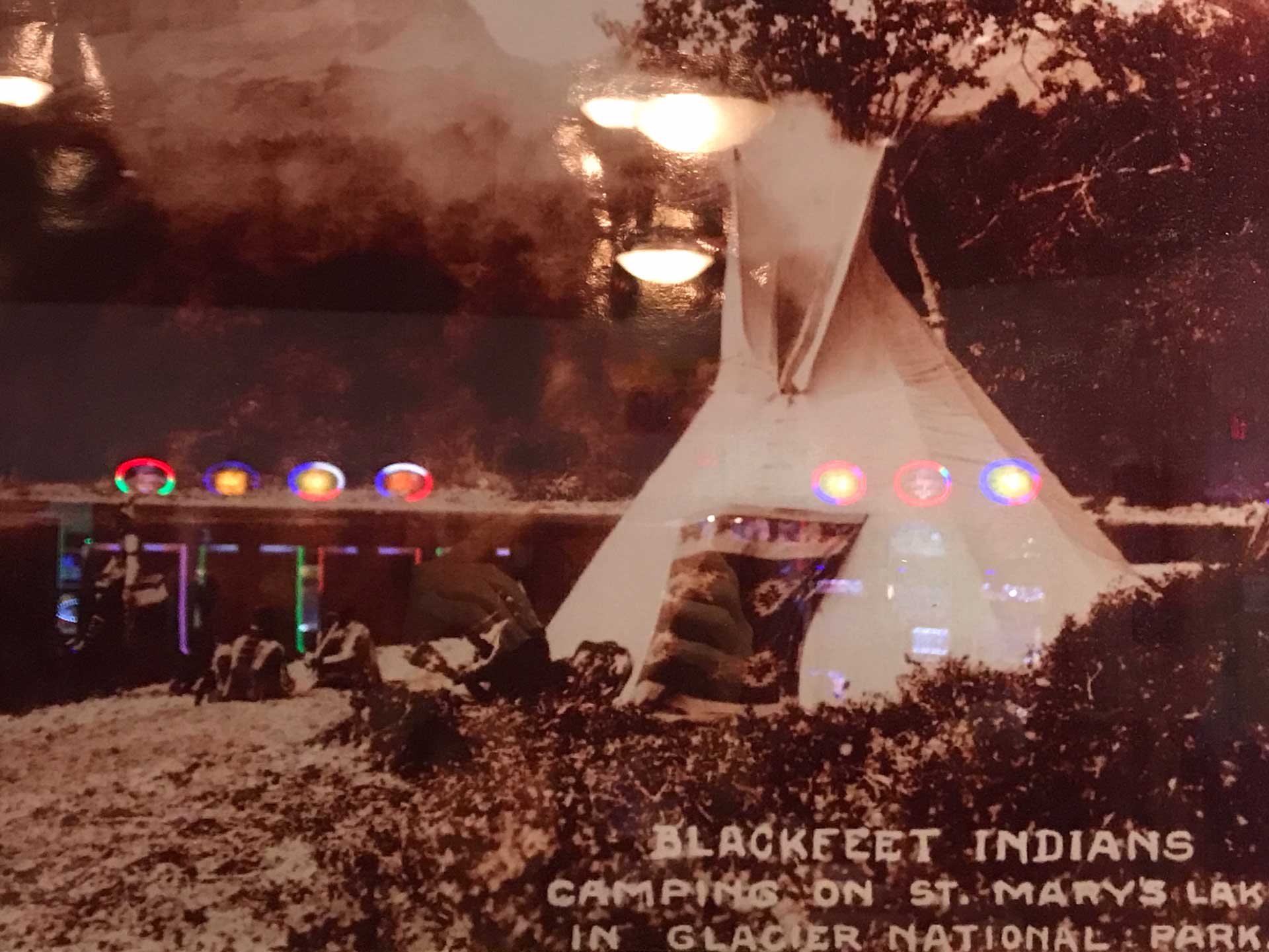 But Larry’s $4.50 senior breakfast and my mushroom omelette did have huge chewy marble rye toast, which seems to proliferate in these environs. We left fortified for a hearty drive.

More 40s music. Today I learned: “Longhair” was a derogatory term swing band enthusiasts used for classical music, that was composed by people like Bach and Beethoven. I hadn’t thought that came out till Bob Seger walked into a truck stop and “always seem outnumbered and you don’t dare make a stand.”

Also, Manhattan Transfer’s songs were all done by someone earlier. Ink Spots did “Java Jive,” for instance. And segregation was a big deal for touring performers, but Bennie Goodman drew a line in the sand when Lionel Hampton was being denied a room and said, “Either he stays here, or none of us do.” Lar also knew that “You Belong to Me” by Jo Stafford (which is Tom’s and my song by Jason Wade) is 2:24, making it a nice short one in a world of disc jockeys having three-minute slots.

By now, we pass what I refer to as milk houses, meaning, “You wouldn’t want to run out of milk if you lived there.” People choose some pretty far-flung places to call home. Montana did its usual pines-and-snow scenery for a while, and then showed us another side of itself: what Lar calls Terra Empty. 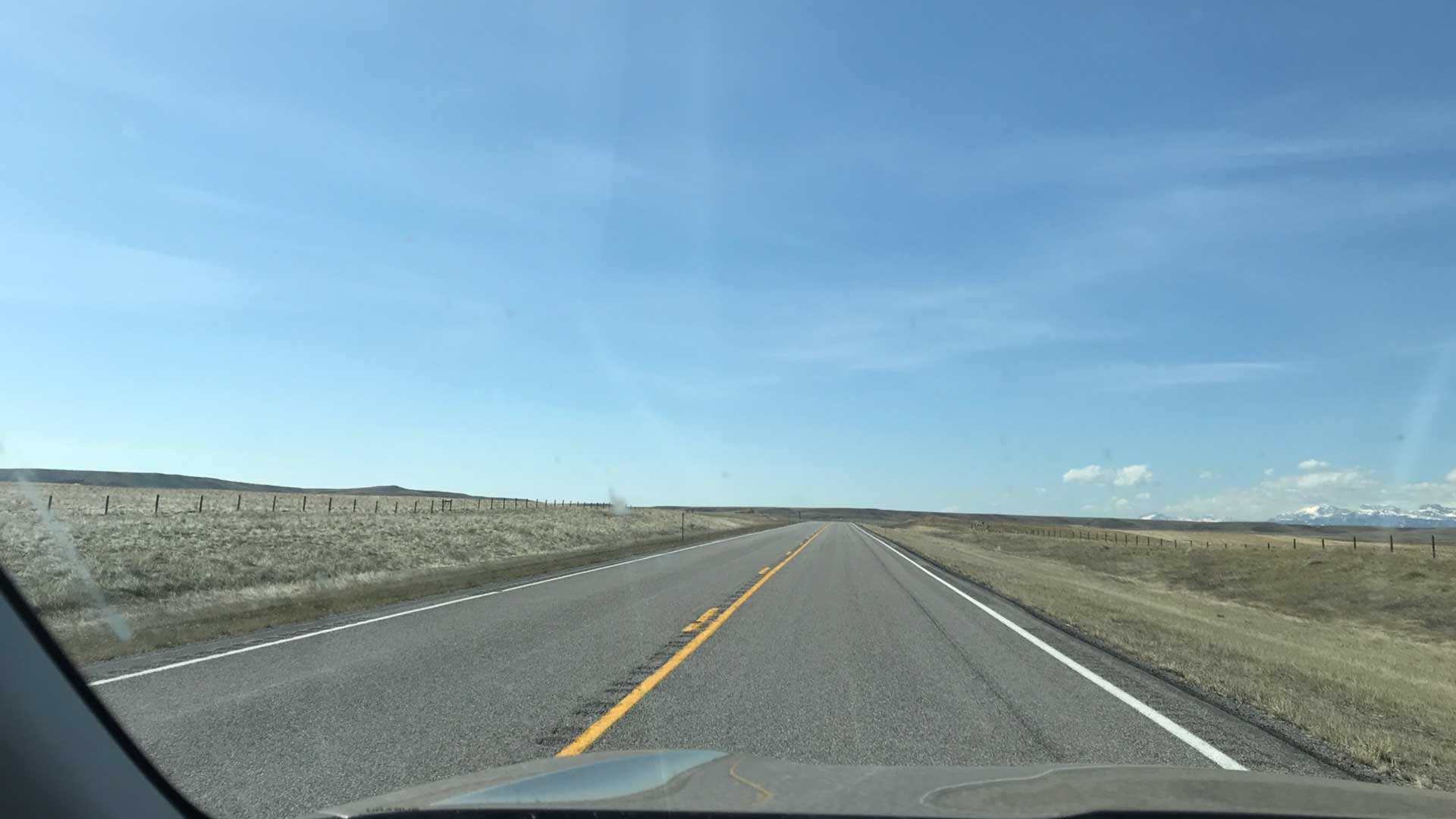 We drove through the lunch hour and arrived in Butte. It’s charming. Think if Prescott and Jerome or Bisbee had a baby. About 30,000 souls live on streets called Iron, Silver, and Galena (which Lar knew was another metal). David McCumber had recommended the Miners Hotel, in a historic building downtown, and we got the Vault Room as promised, plus, a souvenir. 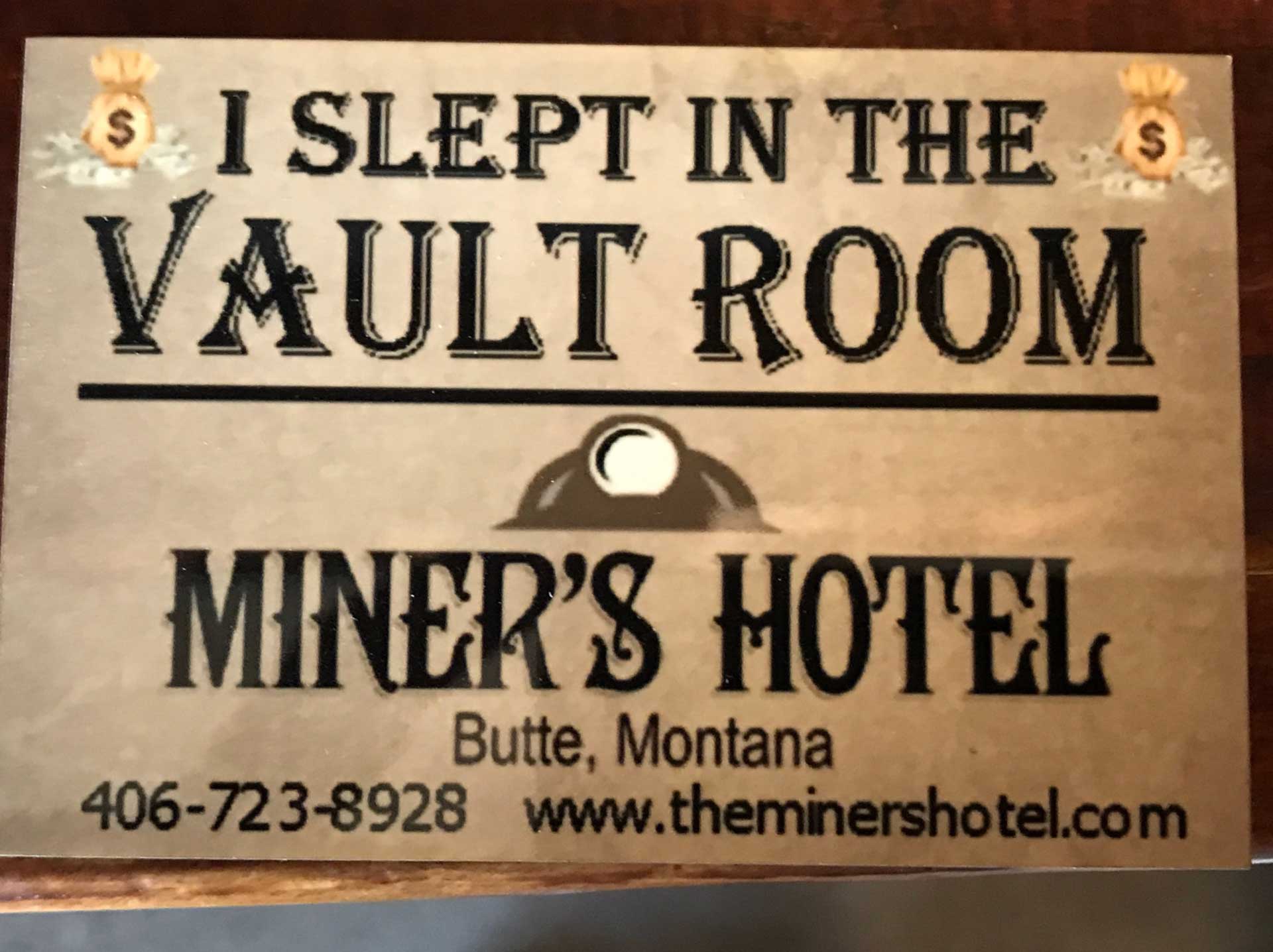 This is the actual room, where I try to show you the big very heavy vault door as well as the hardware that’s been mounted on the wall with a copy of an old newspaper article headed “Miners’ Bank First Butte Firm to Install Tear Gas.” 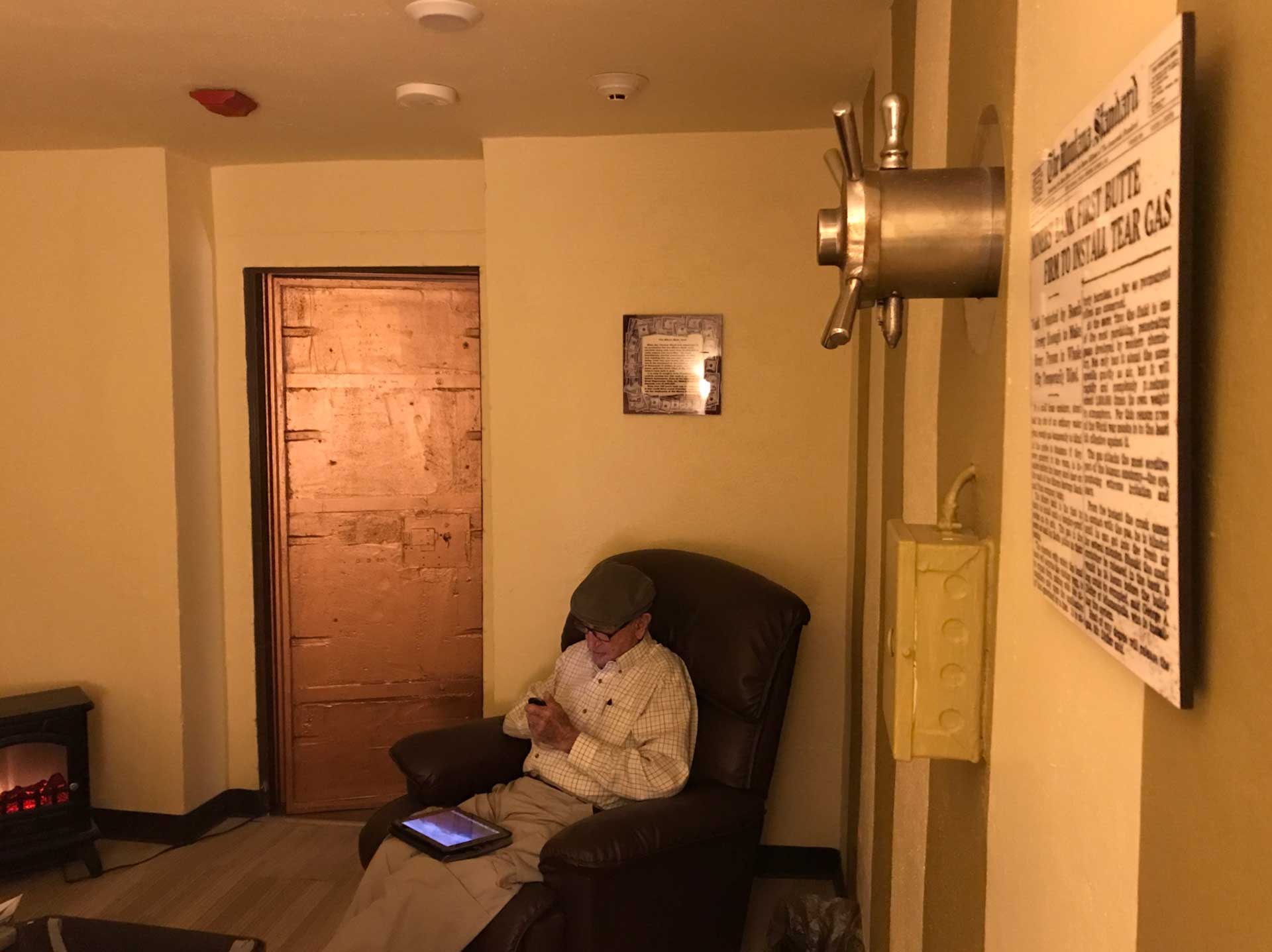 We’re pretty much out of clean clothes and were going to find a laundromat but I realized it’s a one-person job, so he stayed with an India Pale Ale and the pistachios while I took the dried apples and cashews along with my computer to Suds McClean.

Now Suds McClean is not just any laundromat. It’s a laundromat where you can also have coffee and get a tan. I don’t know if I’ve ever been in a place with three businesses that seem to go so poorly together. But Stacy, the owner, was a delight who also used to read Trixie Belden books, and we chatted off and on the whole time I was there. You aren’t allowed to see the tanning part from here, but you can see the coffee area. 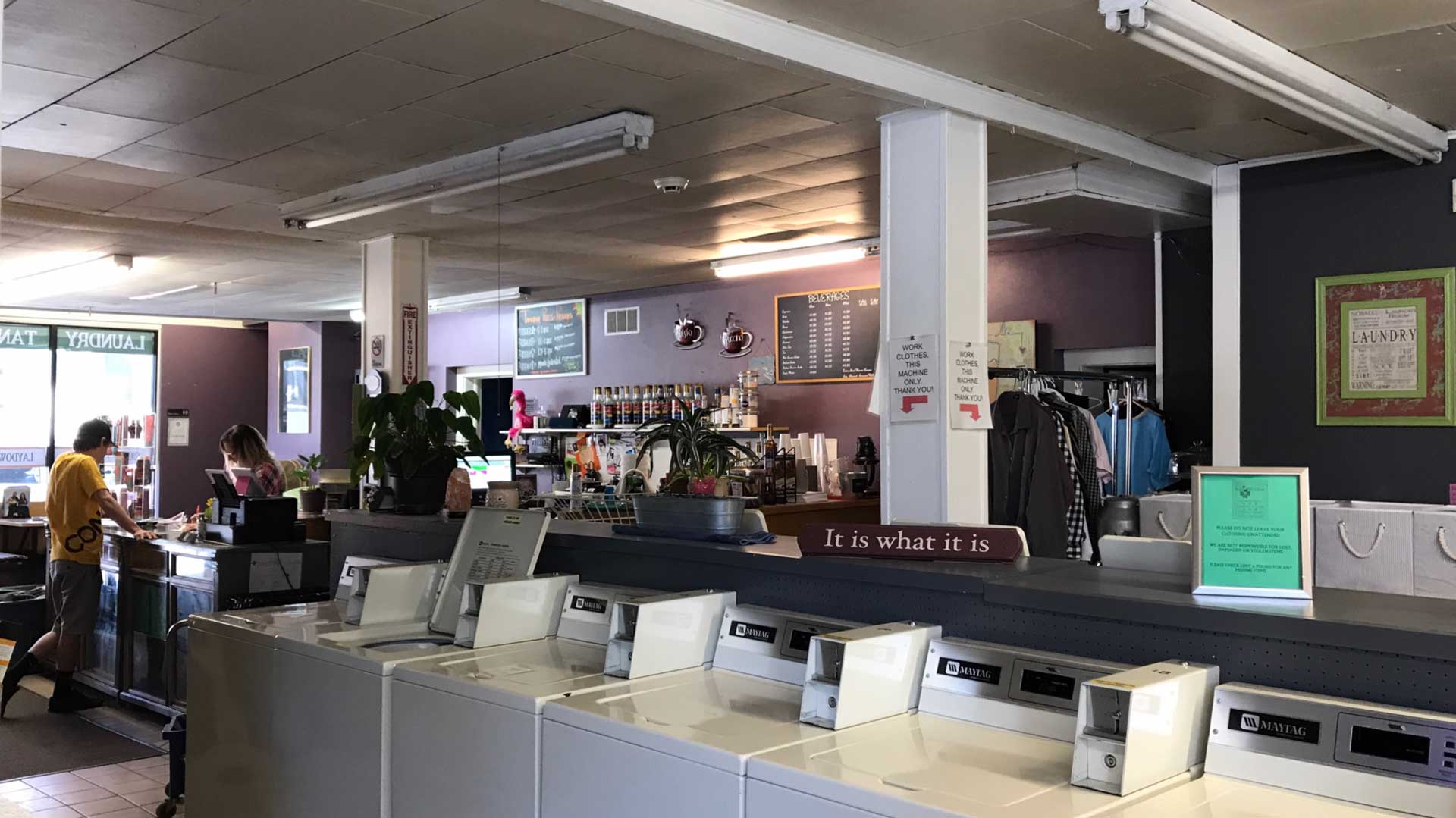 Once I had all the laundry dried, stacked and sorted (except the fuzzy boot socks never did dry and had to be spread out in the solar dryer of the hatchback, and I realized my favorite yoga pants had fallen on the floor only to finish the trip in an ignominious roll in the laundry bag) I went back to the Miners Hotel.

What a place — I’m so glad David McCumber mentioned it. The whole town is one glorious old building after another, and this has been refurbished in a perfect blend of history and uncluttered comfort. Lar was wading through his 262 emails that had accumulated, so I jumped on the web as well to plot a tentative itinerary. As can happen, got pulled in, and was surprised to hear Lar’s timer trill.

We dressed — I’d been in a t-shirt and shorts so that I could wash all the good stuff — and drove to Park 217. This was one of two restaurants David had suggested…you know, he was always McCumber, and McCumber he will be here. Anyway, he had said “fish other than trout is an optimistic venture in Montana,” which warrants mention because Linds had pointed out a preponderance of trout references in these missives. But Montana wins the fish award — 217 had monkfish. I’ve not seen that on a menu in five years; it proliferated in Europe. It – and everything else – was scrumptious.

Here’s what the owners did with what could have been an unfortunate below-stairs furtive entrance: 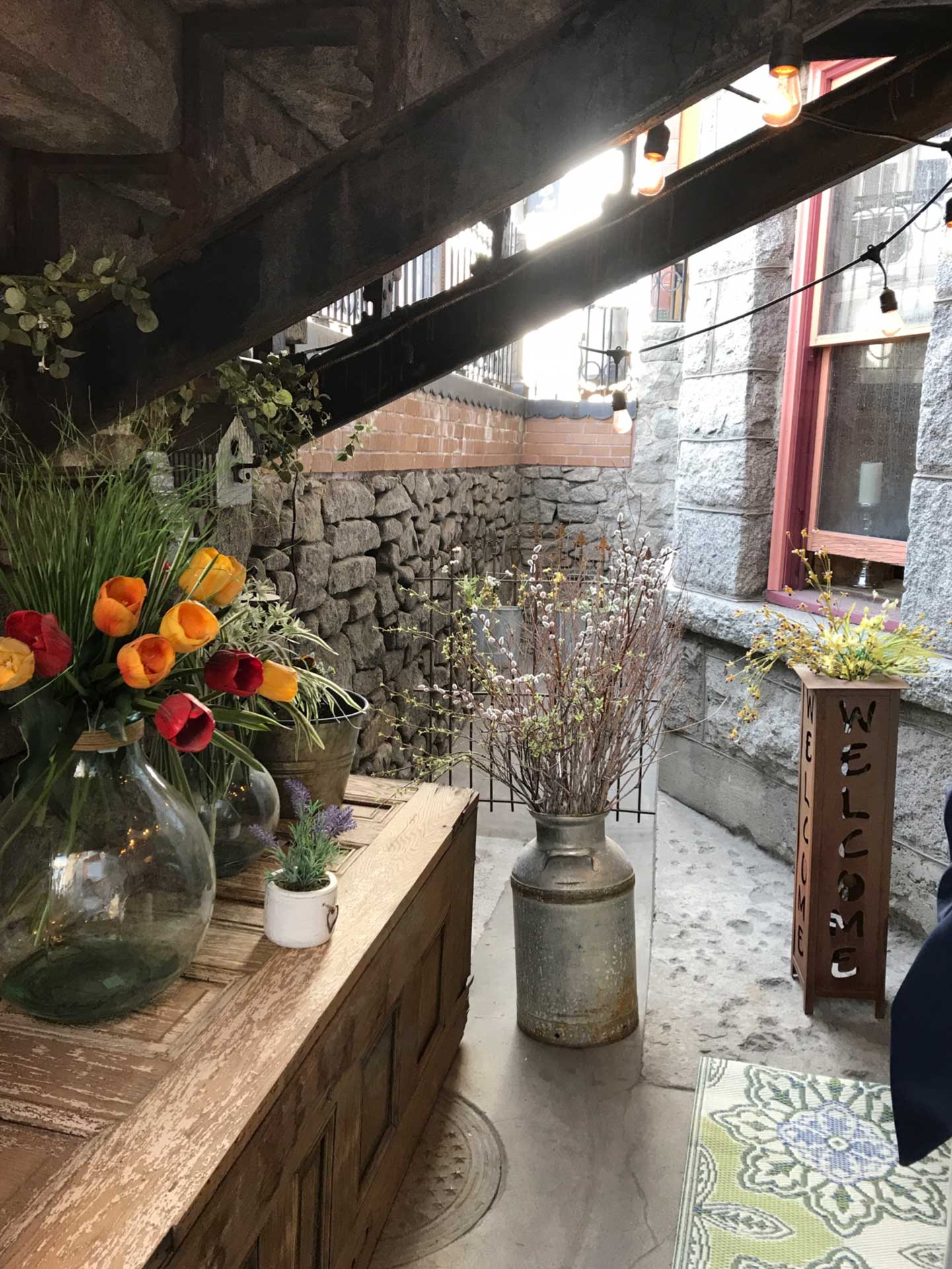 One of the reasons I was so pleased to visit this place is that somewhere online there was a reference to “they kept the vault.” A two-vault stay? That’s a first. After we finished, I started asking to see it for a photo op. The first three employees looked a bit blank and asked a longtime one. Well, maybe. So okay. The wine room sure looks like a vault, but especially since I had dinner with one of the journalists I most admire, I will carefully call out the possibility of it not being a vault. But it looks like a very cool vault. 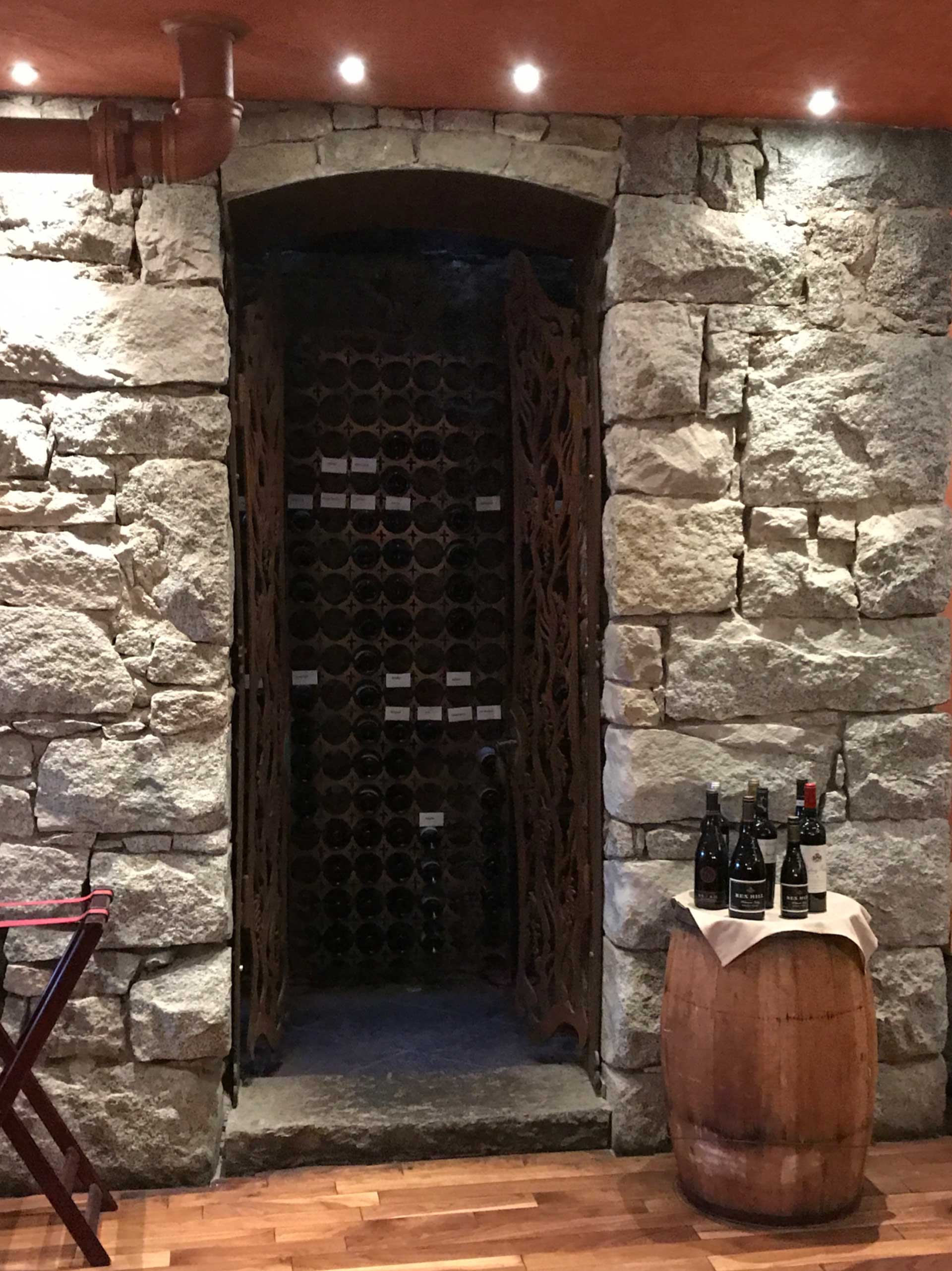 McCumber arrived moments after we did, and was, as expected, a consummate host on behalf of Butte. It had/has the richest ore hill in the nation; at one time it housed 100,000 people, the largest city between Chicago and San Francisco. People are working class, but still raised an eight-figure endowment to rehab an old firehouse and build an annex just to hold archives and preserve their history. Strong Irish population, but miners all, so Welsh, you name it came here.

Speaking of mining, another deft touch with honoring history: 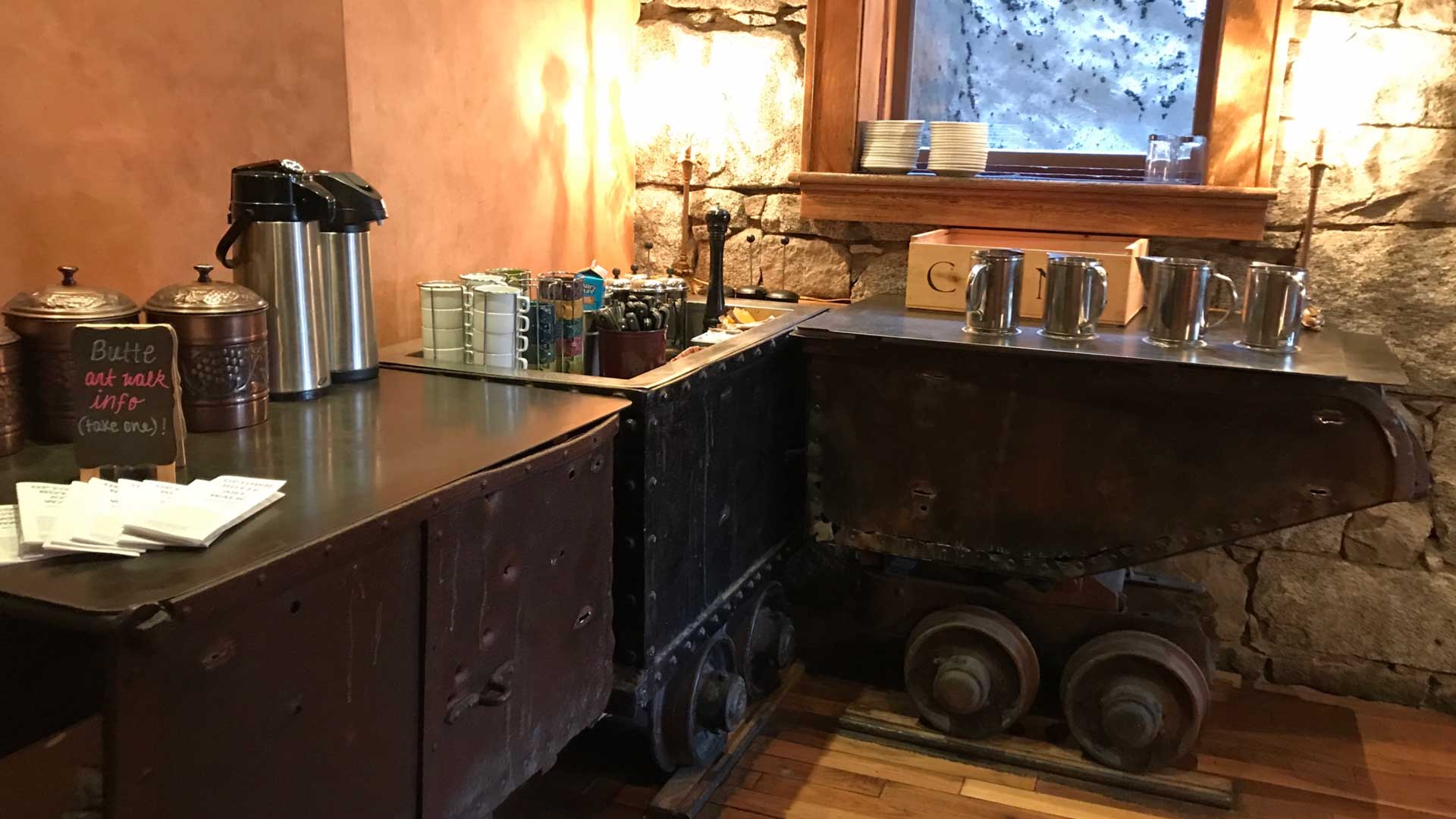 McCumber described Montana as “a small town with very long streets,” which I loved. And because I was a raw informed young girl when last we crossed paths (it’s been 37 years) we had much to catch up on. I knew he’d gone on to a storied career from city editing the Star but didn’t know the scope of it. For those who know a bit about writing books, imagine being not only approached and offered a book contract but then given a second one because the first one did so well. Add Washington bureau chief, then throw in being told by the Hearst-in-charge to set up a writing-in-residence program, using the “extra” apartment on Russian Hill in San Francisco with first-class airfare to bring the best and brightest. So now stir in not only meeting, but editing the work of, Hunter Thompson, Ed Abbey, Sherman Alexie, Nancy Friday, and many more. What a ride. Listening to him was a bit like listening to Lar; knowing if I knew the questions I could hear tremendous stories. It was a “had a drink with Zorro” feeling again.

All this is making me think of what makes a truly fine journalist, and I realize it’s three things McCumber and Larry possess: vivid and complex communications skills that use words artfully and effortlessly; a wide and deep catholic knowledge of myriads of aspects of the world; an abiding interest in people, places and all of life.

So not only did McCumber give us tantalizing glimpses of a world I’ll never inhabit, but he heard about Lar delivering the San Francisco Examiner years before he worked there and going into the city to the San Francisco Press Club. He even gave me some audio for the NPR report.

Then he invited us on a quick tour of the paper. I shouldn’t go into newsrooms; they make me miss them. Regardless of the medium, there’s an energy — maybe all the enthusiastic people over the years leave some curious urgency about.

But it was worth it, seeing his office. And the view gives a good glimpse of how great this town is. Butte is the only place besides Boston that has made me wish I didn’t love Arizona so much. I’d live here in a heartbeat. 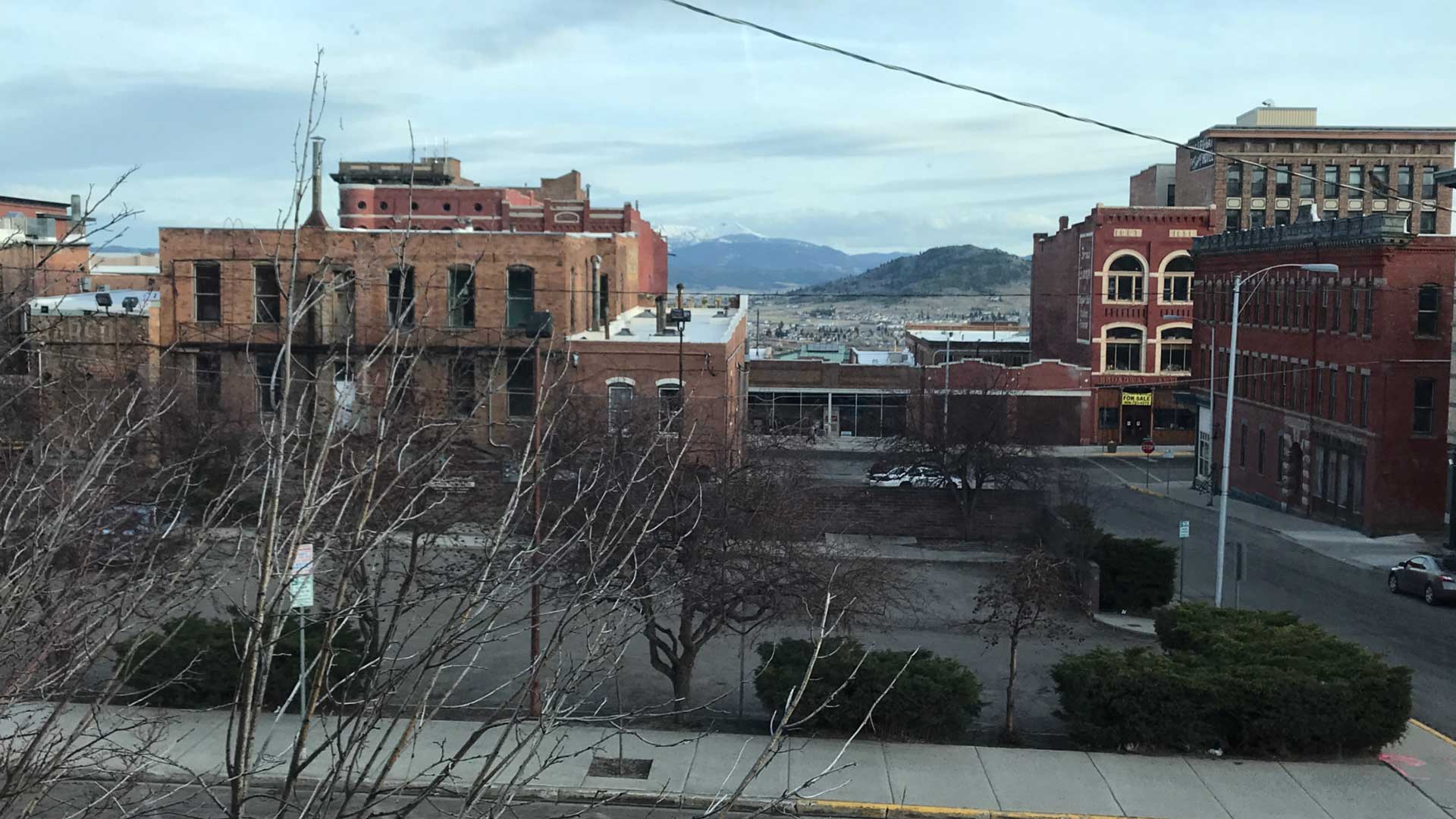 View from the offices of The Montana Standard, the daily newspaper in Butte, Montana.
Courtesy Lisa Schnebly Heidinger

He has collected wonderful memorabilia I didn’t photograph (although a shout out to the antique bureau of wide flat drawers that contain the original owner’s medical tools on bloodstained linen) but this is for Linds and Paul Allvin. 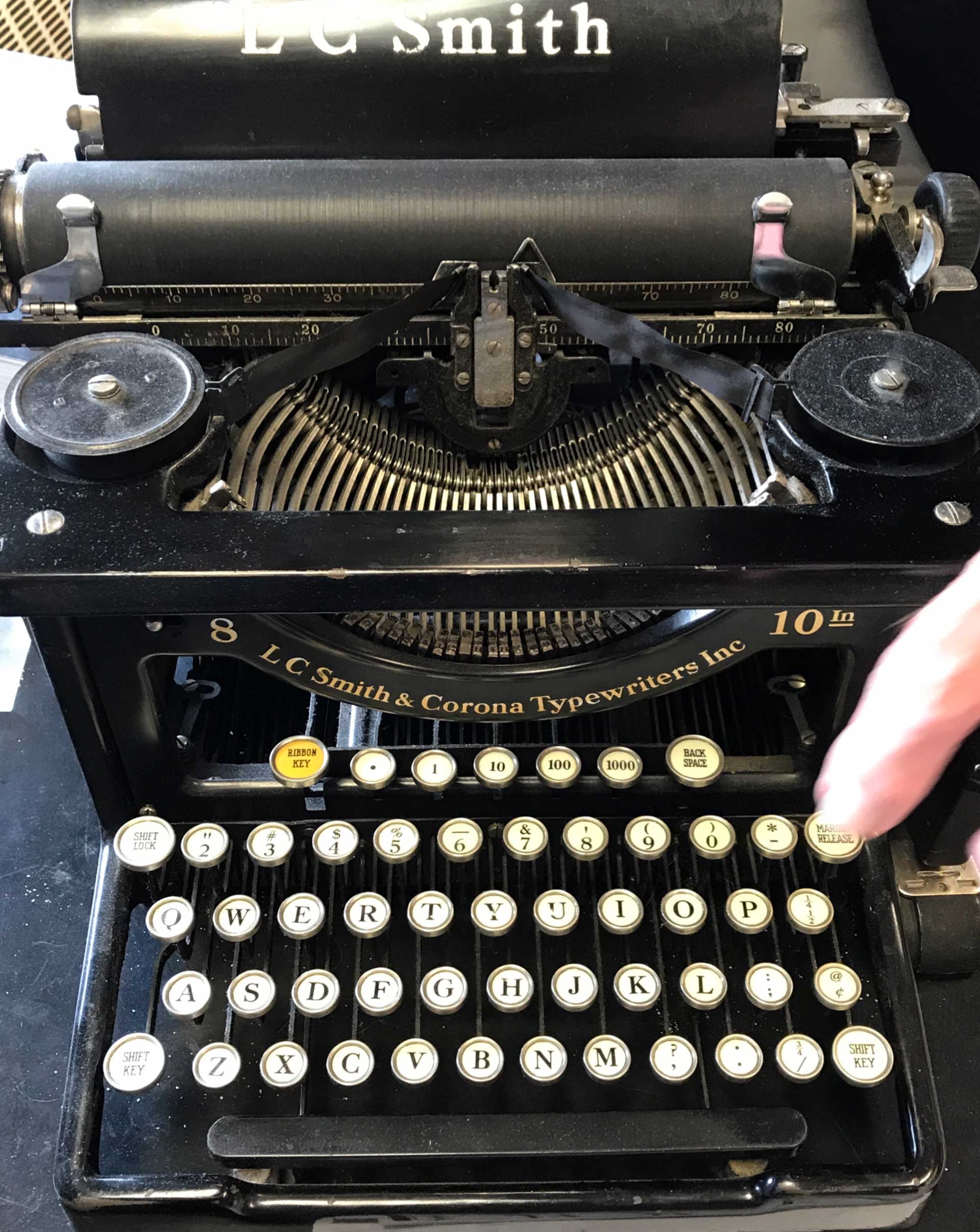 Lar knew the model immediately; he’d worked on one. It was McCumbers’ at his first reporting job. (I was relieved to hear he has plenty of ribbons; that’s a potential scarcity I would find frightening.) So, we came back to our vault and went to bed, and I slept deeply and well despite having a hard time turning my brain off when I did wake up, because of all the wonders I have just described to you. Don’t worry; I doubt they’ll have that effect once removed.

Have a marvelous day. I just read all your names in the send box, and like knowing you’re each here.

And I leave you with the photo McCumber took. 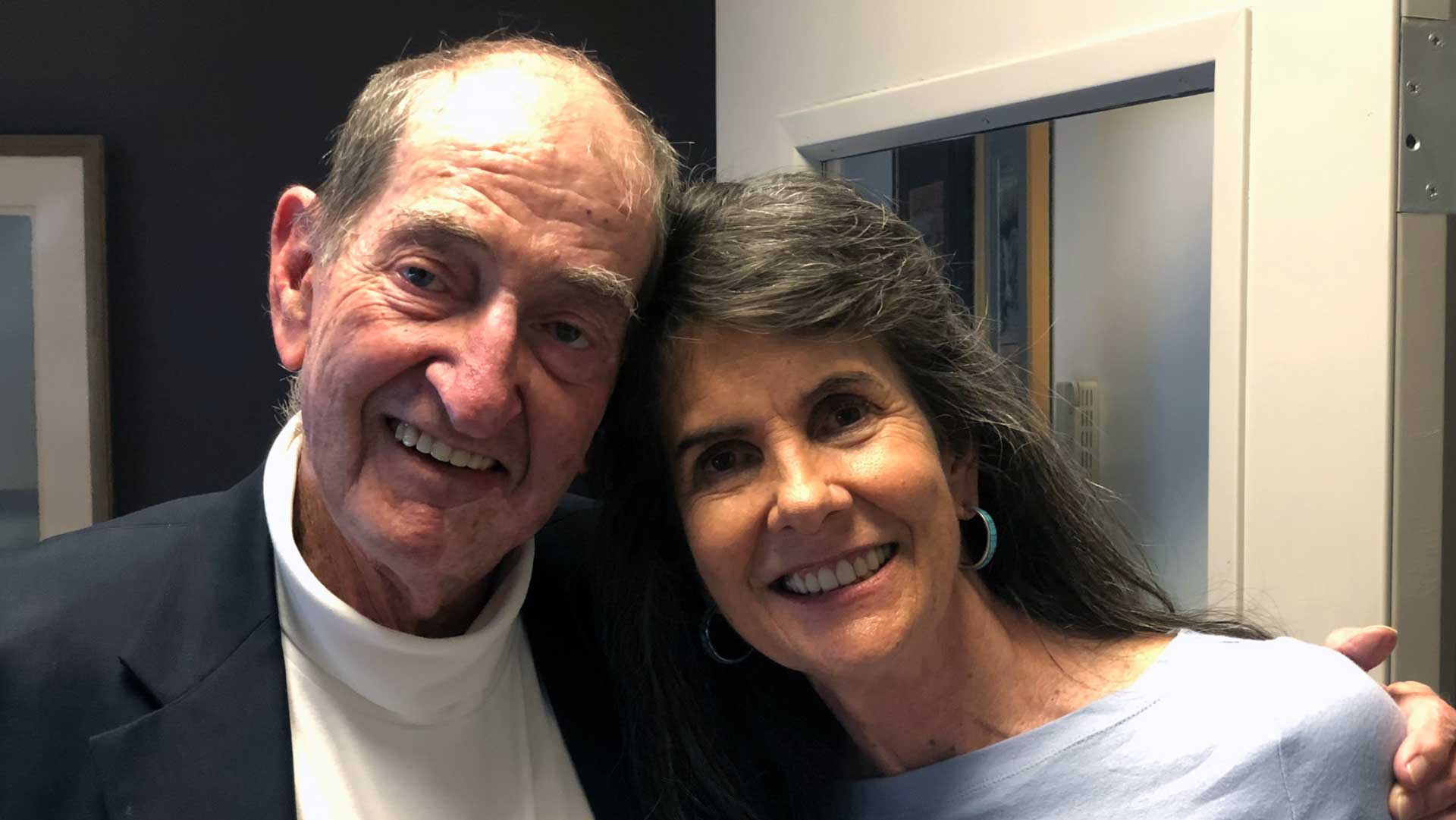 The 89-90 Trip: Canada at Last "The 89-90 Trip" reaches its destination. Travel Route 66 with "The Great Muslim American Road Trip."
By posting comments, you agree to our
AZPM encourages comments, but comments that contain profanity, unrelated information, threats, libel, defamatory statements, obscenities, pornography or that violate the law are not allowed. Comments that promote commercial products or services are not allowed. Comments in violation of this policy will be removed. Continued posting of comments that violate this policy will result in the commenter being banned from the site.